After almost a century, elephants and elephant-handlers will be extinct in Auckland from early 2022

The prospect of motherhood hangs over the enclosure, nestled between the odour of elephant dung and of the tomato sauce diffused into the air by the heat of the servings of hot chips on to which it was squirted. Anjalee, 15, back left leg resting insouciantly on a log, picks at her food, her finger — the dexterous appendage at the end of her trunk — winnowing the foliage through the mesh of the bag, its chain clanking against the tree, sunlight catching on the green fronds as she folds them to her mouth. Her companion, Burma, 38, lighter in complexion than slate- grey Anjalee, age spots dappling her cheeks, is mostly obscured from this vantage: just a pair of thick legs and a crimped tail, trailed by a waddling duck, visible beneath Anjalee’s rolling jaws.

Motherhood — the pursuit of it, at least — will soon separate Anjalee from Burma, and the country’s only two elephants from Aotearoa. When Anjalee — the name means “gracious gift” — arrived from an elephant orphanage in Sri Lanka in 2015, the intention was to build a herd around Burma, Auckland Zoo’s only elephant for the preceding half-decade. Anjalee and another elephant scheduled to arrive from the same orphanage would be artificially inseminated by an Australian bull, the plan went, and raise the next generation of Auckland elephants. But an ongoing Sri Lankan court case meant the other elephant never arrived. Then the Australian bull — by far the most successful local provider of semen — died. All of the factors that a decade ago led the zoo to commit to an elephant programme began to disappear, zoo director Kevin Buley tells me in his office. “At the same time, we’ve got the circumstances that Anjalee needs to breed.”

Ultrasounds have identified abnormalities in Anjalee’s reproductive tract. Andrew Coers, the leader of the elephant team, says that Anjalee delivering a calf will “basically reset” that aspect of her biology. The earlier she falls pregnant, the better for her health. And so the decision was made to send her to Taronga Western Plains Zoo, in Dubbo, New South Wales, where life among a herd of two cows, one calf and three bulls will give her every chance to become a mother. Burma, at a different stage of her life, and with different needs, will join an all-female herd at Queensland’s Australia Zoo. In early 2022, the two animals will be loaded into the crates currently standing in the background — black steel exoskeletons fenced off with a length of knee-high electric tape — and flown across the Tasman. Auckland Zoo’s association with the species, dating back almost a century, will end.

Coers speaks with his bright blue eyes lit by the morning sun. They often rest, over my shoulder, on “the ellies” behind me, where his wife — also his colleague — is working with them. Coers, 41, was 16 when he began volunteering at the zoo, a dream for a boy who grew up on 10 acres stocked full of animals — dogs, sheep, cows, chickens, a pet pig named Murtle — and who still remembers the formative experience, as a three-year- old perched on his father’s shoulders, of coming face to face with Kashin, the much-missed elephant who spent

the final 36 years of her life in Auckland, before being euthanised in 2009. Eventually Kashin, then Burma, then Anjalee would form part of that small boy’s most profound adult relationships. For 21 years, Coers has worked with Burma, his career dedicated to ensuring that she — and, latterly, Anjalee — are challenged, kept busy, their minds engaged. “They are a massive part of our life and in some ways it’s a little bit difficult to think about what we are going to do once they move.”

Burma has been an Aucklander since arriving from a Myanmar logging camp in 1990 — the same year East and West Germany were unified, the year the New Zealand Bill of Rights Act was signed into law. Her 30 years in Auckland have seen her mature from the skittish young thing Coers first remembers: an animal full of insecurities, quick to worry, who would flinch — Coers drops his shoulders in imitation — when a bird flew by too close. Now Burma is much more considered, “much more conscious around the decisions that she makes”. Coers doesn’t qualify his affection: “She’s just such a cool elephant.”

She’s eager to please, calm and forgiving, fastidiously clean. She’s the kind of old girl — Coers dips into anecdote — who didn’t flinch when once, out for a stroll, she was charged by a little girl breaking away from her grand-mother to smother the wizened old trunk in affection. Burma, Coers says, “just knew” that this little girl was only expressing the connection she felt. “There are so many things about elephants that remind you of people, you know: their ability to manipulate, their intelligence, how smart they are, and also how affectionate they are. The trumpeting when they acknowledge you, the little squeaks they give when they are happy to see you. It makes you feel valuable to them. It makes it easy for you to make some of the sacrifices that we have done to look after these guys.”

Which is not to say Burma doesn’t, on occasion, show a feistier side of her personality, testing the abilities of her human companions. “You think you’ve got the ability to do it, but really the elephants are going to decide. They are going to decide whether you’ve got the tools, the willing- ness, and they push you to see whether you are worthy of it.” And that’s what you want, Coers says, of the days when Burma has “a bit of attitude or a bit of a mood”. “You don’t want to work these elephants in a way that they shut down because they have to do what they’re told every day and if they don’t then there’s these consequences. I want her to have an attitude and a personality.”

Laurel Sandy, 41, another of her handlers, describes her time with Burma as “quite a journey. We’ve probably grown up quite a lot together.” She began when Kashin was still in residence and Burma — then overshadowed by the people-pleasing older elephant — shied away from the socialising that came naturally to her companion. With Kashin’s death, “she had to learn to cope differently and grow up a lot”. And with Anjalee’s arrival, Burma “changed again … suddenly becoming the dominant animal, taking on this role of being the dominant animal and trying to be serious, which she just hadn’t had to do before”. 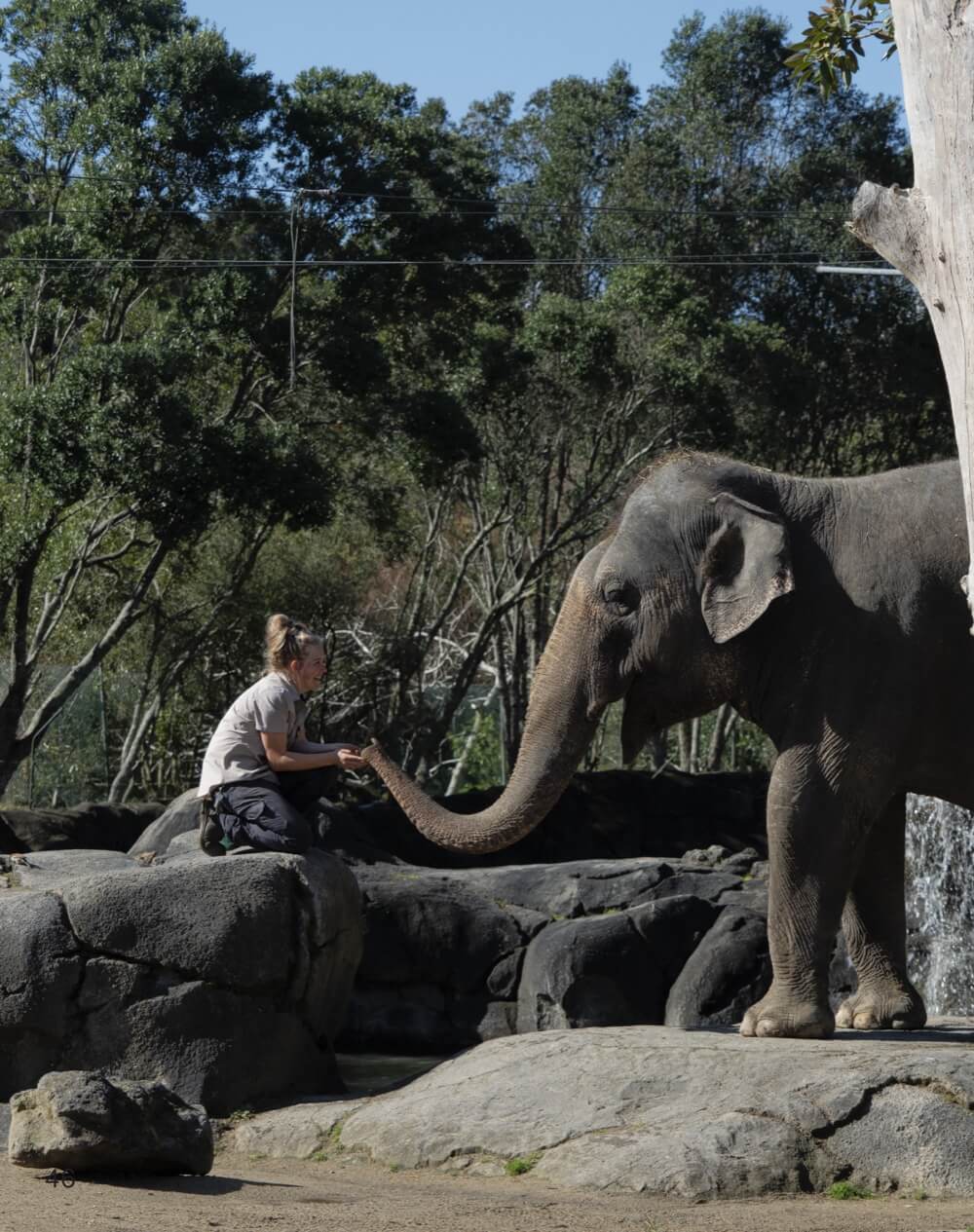 Anjalee was born at the Pinnawala Elephant Orphanage, near Kandy in Sri Lanka. When she was four, she was separated from her mum, who had been causing trou- ble, and this left her estranged from the social structures of the herd. When Coers first visited, to decide if it was morally acceptable to transport Anjalee across the ocean, he found a young elephant flitting between sub-groups but always on the outer, bullied when it came time to feed. “There was never really a place for her.”

It wasn’t until her three-month quarantine in Niue that the team saw the then eight-year-old “really start to come out of her shell”, Coers says. “Play was more visible, her cheekiness was more visible.” She began to learn that food — she developed an appetite for coconuts — was always coming and it was not something she had to fight for any more. Anjalee had hardly ever been touched by a human hand before, but she soon began to learn that cooperation with the bipeds around her might be to her advantage. When she got to Auckland and, for the first time, was no longer shackled once the sun went down, she could do “whatever she bloody wanted” with her nocturnal hours. Coers saw her respond to a world that suddenly seemed more pregnant with possibility. “Her personality was starting to shine because of the way we wanted to manage her, and a whole lot of attitude, too — she was so full of herself. But again, who cares? I was like, ‘This is her, good on her.’ She’d been suppressed for such a long time and now she’d been given a chance to really show who she is and who she wants to be.” As Sandy says, Anjalee “likes to push boundaries”.

The relationship between the two elephants — Burma hardly acknowledged the interloper when Anjalee first arrived — has strengthened over the years: at times during Anjalee’s menstrual cycle, Burma will refuse to leave the younger elephant’s side, and they come together when something worries them, like a helicopter buzzing overhead. But they are also happy to spend time alone, and often do. Neither animal has ever needed the other the way Burma did Kashin, and their impending separation, Sandy says, is just a recognition of “who they are as individuals and what they need as individuals”.

All six members of the Auckland elephant team will travel to Australia to help Burma and Anjalee settle in. The logistics of the move — complicated, like everything, by Covid — now occupy their minds. You get the sense of waves of sadness mentally batted away by a focus on the work to be done, and the team speak of the way knowledge of the looming loss — “a bereavement”, Buley calls it — visits them all at different times.

But concern for the elephants had to trump personal grief. When the difficulties of establishing a family herd in Auckland became insurmountable, Coers knew there was no option but to send Anjalee and Burma away to somewhere they could find a life more closely approximating natural elephant existence, where in the long term their well-being could flourish.I watch as the crates are unfenced and the two lumbering giants are led in and out, gladly accepting fruit from their handlers, learning to associate the structures with good. The mystery — the joy — of watching animals is not so much the wonder of what they are thinking, but the how. Without language to mediate and obfuscate, what propels thought down those neural avenues? They can’t know exactly how, or why, but as I watch a trunk snaking out of the crate, seeking apple from the palm of a hand, I think that the association being built is no deception. These crates, soon to carry them to the greener fields of sunburnt Australia, are for their good.

Humans, of course, are a little easier to read. I detect a slight clouding of the blue eyes, a catch in the throat, as Coers wraps up our conversation, considering a future without his two friends, one of whom he has known longer than his own children. “We’ve had so many people to our encounters, visit the elephants, talk to the elephants as if they know them. You don’t tend to get that with a lot of other species here … I think it’s a massive loss.”