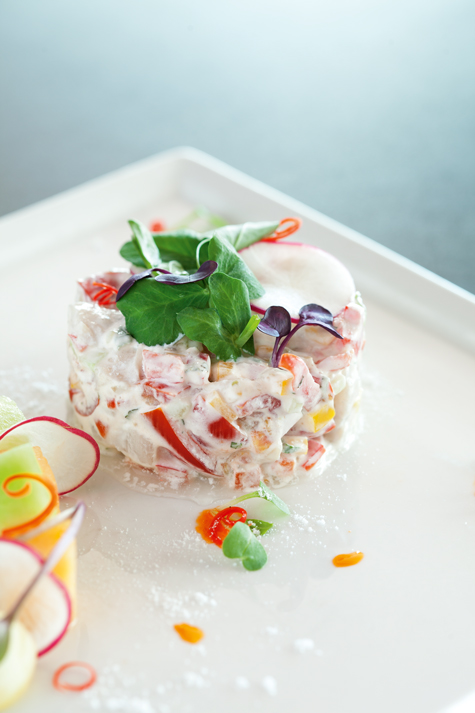 The Foodstore is a waterfront restaurant which serves only New Zealand food and wine, and where you can watch Food TV or live coverage from the kitchen on screens mounted around the room. I was about to tell you that they should focus less on gimmicks and more on the food, but actually, a bit of focus on the gimmicks wouldn’t hurt either.

When we visited, half the screens were tuned to the motor racing on Sky Sport 3. We had a group of men next to us, so maybe the guy with the remote was taking requests. And that local provenance thing — they allow one exception, and that’s Champagne. They paint this as a concession to quality, but of course it’s a concession to their accountant. If you’re worried about the local stuff being inferior, stop offering room-temperature sherry made in Henderson.

At least the food’s well sourced, with ethical this and dry-aged that. But for all the flurrying on those TV screens, some of the dishes seem like they’ve never been near a decent chef. Who designed this: slabs of haloumi served with a salad of cabbage, pea and… ricotta? Talk about a cheese course. The waitress looked as surprised as me when I asked what the wet, white stuff was. “Just leave it on the side of your plate,” she advised uncertainly.

It’s hard to make stars of your chefs when the floor staff aren’t convinced themselves. What was the lime-cured fish like, we wondered? “Not as good as mine,” admitted the waiter. “Too many flavours in there for my liking.” Not on the night we visited: they forgot the citrus. “Sorry,” said our server, after confirming this with the kitchen. “The sous chef is getting a blasting as we speak. Can I offer you free desserts?” Um, yeah. Is there any lemon in the lemon meringue?

They’re likeable, those waitstaff, and eager to please. Curious to discover what $29 fish and chips tasted like, I tentatively began to order some. “Nah,” said our guy, whose frankness we were now starting to quite enjoy. “You know what fish and chips taste like. Why would you pay 30 bucks for them?” If only we’d had him all night: seven different people visited over the course of our meal. I’m all for a bit of variety, but I’m certain this chaotic system was responsible for the frequent long gaps in service.

So what is there to like? Well, it’s a beautiful spot, with plenty of sun and water nearby, and if you were taking overseas visitors out on a Monday night, you could do worse. Though if you’re in the Viaduct anyway, you could easily do better: this place competes with Soul and Kermadec. Oh, and with Euro, which also has an open kitchen and plenty of great local grub.

But we were talking about things you might like. Well, it’s cheaper than Euro, particularly if you count all the stuff we got for free. Not just those desserts but our sides, which were comped because they arrived two minutes later than our mains. If you order very well, it’s possible to enjoy all three courses: smoked kingfish with almond, chorizo and preserved lemon is great; the venison is a beautiful piece of meat and prepared deliciously with braised red cabbage; the pavlova is Christmas.

But mostly, it’s just annoying. All this rah-rah pro-Kiwi bluster, do they really mean it? Do you know how many beautiful craft beers are made locally by small, passionate producers who really could benefit from exposure to a wider audience? And what does the Foodstore serve? Monteith’s and Heineken. What an insult.