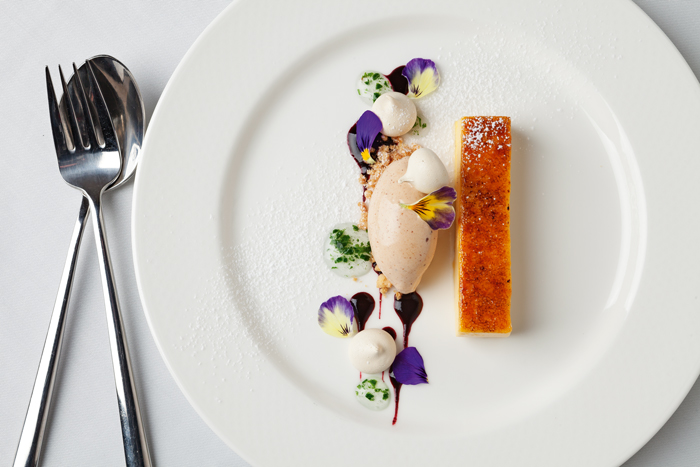 Of all the restaurants I’ve written about for Metro, I’ve never been quite so excited to send you somewhere as this month. This is the real deal: mind-blowing food, service you’ll fall in love with and yet, unbelievably, in a restaurant still mostly undiscovered. Kazuya’s discoverability isn’t helped by its location. It’s impossible to describe, invisible when you walk past and, with nowhere to park, you do wonder how many potential customers run out of petrol circling and decide to go get a burger with the AA guy instead.

The chef/owner is Kazuya Yamauchi, who was head-cheffing at Rice a couple of years ago, and Cibo before that. But now he’s opened up his own place, so that nobody can tell him two weeks is too long to spend making one batch of ice cream. Before all that, he worked at a fancy Italian restaurant in Tokyo, which is presumably where he learned how to bring Japanese and European food styles together so artfully, and without freaking the bejesus out of customers in the process.

Every ingredient has a story about where it was found and what the chef’s been doing to it in the 24 hours before its arrival on your plate. Honestly, I don’t think he sleeps. Take one example, scotch fillet — he sears it, rests it, then cuts off the seared surface, roasts the remainder at 60 degrees for five minutes, rests it for five minutes, then repeats over and over until it’s done. And what is “done”? When it tastes like meat, without flavour crutches. In this dish, Kazuya does without sauce, browning, smoke, salt or fat.

Three types of bread are baked onsite. The scallops come from the sommelier’s hometown in Japan. A “super strawberry” is vacuum-packed with strawberry essence to smart-bomb your taste buds. Fish of the day was alfonsino. Alfonsino? Isn’t that the full surname of Henry Winkler’s character in Happy Days?

Point to any piece of food and your server will give you its life history. And they will do it with that uniquely Japanese charm and deference that makes you feel you’re the most important, interesting person in the world. When was the last time you ate at a restaurant where you couldn’t wait for the waiter to come back?

That sommelier is the best of the lot. He’s a Japanese Francophile, presiding over a fantasy French-Kiwi winelist but also what must be Auckland’s only cheese trolley, which he squeaks up to your table after the savoury courses to try to get the lacto-scoop on that ice cream.

Complaints? Well, the room looks good but the fit-out feels a little temporary — you can never quite forget you’re on Symonds St, inside what was probably once a wig salon. When you look at the competition in the fine-dining category, it’s the atmosphere and surroundings that’ll be hardest to keep up with. But no one will touch Kazuya for straight-out lovability.

As you’re paying the bill, you feel a bash­ful presence behind you and turn to see the chef bearing a sort of fortune cookie for you to take home. “Hurry back to the kitchen,” you feel like saying. “I’m coming back to eat here next Wednesday and you’ll need to make a start on that steak.”