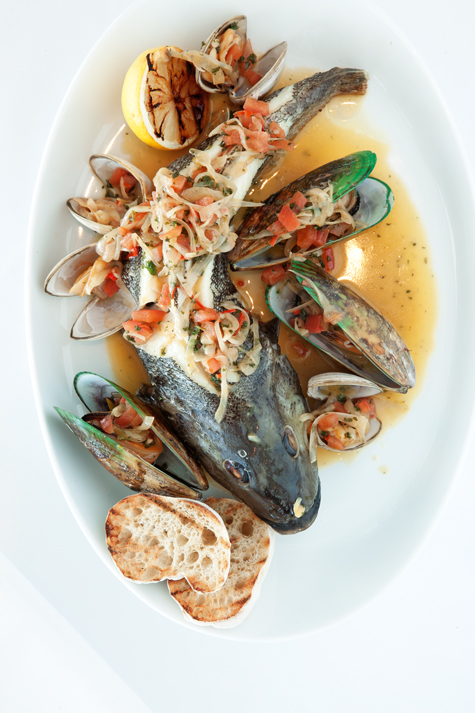 There’s a lot right with Fish, Simon Gault’s new venture at the Hilton, but there’s a lot wrong with it too. Let’s hope they get the bad stuff fixed before the Rugby World — oh.

The Cup must be the reason they’ve opened quickly, before the website is finished — not even a PDF menu! — and before they’ve finished cleaning out what I presume is the winelist of former tenant White. Two weeks after the place opened, some wines were no longer available. Our sommelier promised that the list would be better soon, and I believed him.

That poor sommelier. He moved to New Zealand from a Michelin-starred London restaurant for the job and the waitstaff won’t let you speak to him. You don’t expect a waitress to have all the answers, but you expect her to know where to find them. It wasn’t until I suggested it that she finally called him over, and he was a rockstar — ignoring the measly selection he’d inherited and pouring me something nicer that was open.

Most of the renovations to White are cosmetic, but there is a beautiful new deck out front, with probably the best restaurant view in Auckland. Unfortunately, we were seated on the other side of the room, 10 metres from said deck, looking out at the hotel fire escape. Yes, on day two of the Cup, in one of the only rooms in the city with an unobstructed view of the Cloud and all the activity around it, the maître d’ of an empty restaurant put us at a table facing the other direction.Even in a good seat, it’d be difficult to forget that you’re inside a hotel — the shared lobby, the buffet-width central bar, the generic music piped through speakers in the ceiling. At one point, while the waitress stood there trying to think of something to say about the house pinot gris, I listened to an entire verse of Madonna’s “Crazy for You”.

But the food, it’s great! This kid in the kitchen knows how to do fish — preserving its precious moist flesh by cooking it whole, or in big hunks, or crumbed in something tasty. Over two visits, I ate almost half the menu and nothing was overcooked, nothing was underseasoned, everything was fresh and flavourful. Some highlights: whole baked flounder with café de paris butter, hapuku with a crab-and-prawn crust, salt-and-pepper paua, beef carpaccio with parmesan crumbs and a clear gazpacho jelly. And a whole blue cod, his smile baked onto his face, fleshy and juicy and scattered with shellfish.

My only complaints about the cooking were conceptual: mussel parpadelle seemed mismatched with its thin watery sauce, “pea and carrot textures” contained precisely two textures: whole peas and a purée. And, considering the uncertain service, the menu is expensive — $26.50 for four scallops, that sort of thing. Of course, they do have that new deck to pay for.

For dessert, if you like, a chef will come to your table to create chocolate mousse in front of you using liquid nitrogen. If only he’d come earlier during the Madonna track, that dry ice would have suited the atmosphere perfectly. We tried some other good desserts too, on the night Fish discovered why you don’t serve melting scoops of ice cream on flat, edgeless plates.

See what I mean? All quite fixable stuff. It would be four spoons for the food, easy, if it wasn’t for the rest. The waitstaff need to sharpen their act; that’s the main thing. I asked one of the head guys whether they had any interesting beers and he replied that he didn’t drink beer so he hadn’t looked. That stuff’s cute if everything else is immaculate, but when a restaurant is very clearly still getting up to speed, joking that you don’t care is really just annoying.