Get shucking: How to eat and enjoy oysters

Bluff oyster season is kicking off off and we're ready to shuck, slurp and sip the delicacy.

Executive head chef of Nourish Group, Gareth Stewart is shelling out the info on what makes oysters worth throwing a festival over – and how best to enjoy them.

Last year, the Princes Wharf Oyster Festival shucked through 62,000 of the briny treats – more than three times the number at the Bluff Oyster Festival. And they’re looking for a new record this year.

The month-long festival heralds the start of the March-August Bluff oyster season and will see Nourish Group’s Euro, The Culpeper, Coley & Punch and The Crab Shack host an all-you-can-eat extravaganza, a five-course champagne lunch, music, a seafood boil-up, and an oyster and whisky masterclass, among other events.

Nourish Group’s executive head chef Gareth Stewart first tasted an oyster at the age of 18 having just started working at Claridge’s Hotel in London (“nobody knew how to open them,” he laughs). Portsmouth-born Stewart says that in the UK, he didn’t see the buzz for oysters he sees in New Zealand: “You see them now and again through menus but nothing like here.”

Why are New Zealand’s oysters so great?

As a subtropical island, there is really no better place for oysters; we’re surrounded by cool coastlines ripe for oysters to latch onto. However, in all that 15,000 km of coastline, we only have two species. There are Bluff (Dredge) oysters – bottom-dwelling oysters that thrive in Bluff; and there are Pacific rock oysters – larger oysters that grow up and down the country.

Pacific oysters aren’t as creamy as the Bluffs, and haarbitraryve a firm, briny, salty flavour. Two of these available at the festival are Waiheke Island’s Te Kouma Oysters (which Stewart names as his favourite variety) and the Coromandel’s Te Matuku Oysters, which have a similar heady succulence as Bluffs, with a massive hit of salt.

Read more: Why Pacific oysters are worth it | Slow down for coffee at new Grey Lynn cafe It’s Java

Pacific oysters are available year-round, fuelling New Zealand’s oyster obsession. So it’s little wonder that since moving to New Zealand, Stewart has caught a taste for the shellfish. He has proven his love of oysters by braving the oyster boats of Foveaux Strait, between Bluff and Stewart Island, in the name of a closer connection between growers/producers and chefs.

“It’s one of the roughest oceans in the world,” says Stewart. “That and the North Sea are pretty ferocious. But it’s one of those things you have to do. Certainly as a chef, going to the source of where your products come from, I think, is really important. For us to sell this many Bluff oysters at Euro, I think it’s really important that you go and see for yourself how the process is.”

Foveaux Strait’s treachery is apparently worth it; Stewart reckons it produces some of the best oysters in the world. Foveaux’s floor is mostly flat, perfect for the bottom-dwelling dredge oysters that reside there. It’s shallow – only around 18-27 metres deep – an ideal depth for oysters. The water is cold, which Stewart explains is essential for producing good seafood.

Crucially, the water is clear and clean so that the 80-odd litres of water that each oyster filters each day is free of pollutants and contains only the phytoplankton that the bivalves feed on. Oysters can hold toxins in their flesh, so their home far away from the rest of the world helps Bluff oysters earn their place as a coveted delicacy: they’re big, they’re creamy and so packed with flavour that they really are too good for anyone who doesn’t love them.

The lengths gone to getting oysters to Auckland

Getting the oysters from Waiheke and Coromandel isn’t particularly difficult – but the 1,663km journey from Bluff is a bit of a logistical nightmare.

The oysters need to be transported fast, cold and right side up. “If they’re stored upside down then all the juice comes out and they die,” laments Stewart. “If they’re kept in a cup with the lid on top and stored like that then they’ve got three to four days in the fridge.”

The third transport option for oysters is pre-shucked and in a pottle with eleven of their mates. They are then frozen and shipped to Auckland to be served on shells that are shipped up alongside them. Stuart explains the mix of fresh and frozen simply: “Because we sell hundreds and hundreds, we just wouldn’t be able to keep up if they were live.” 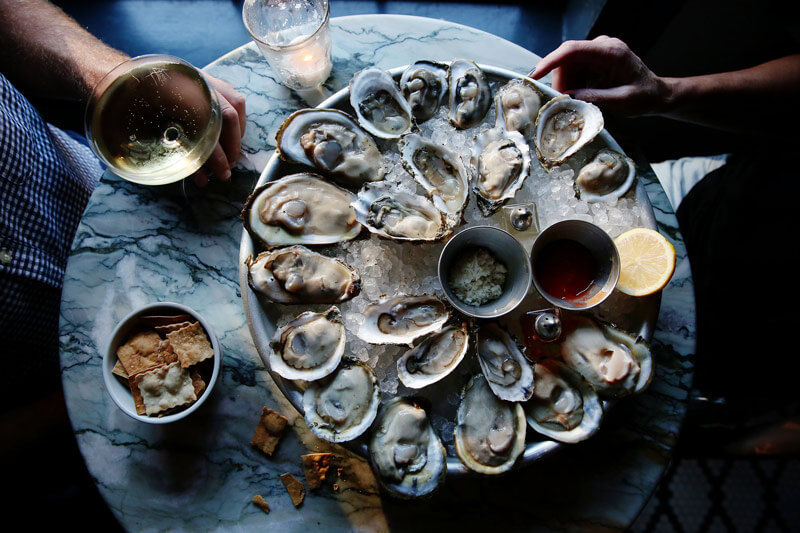 Both varieties will be available natural, Kilpatrick or tempura, and though Stewart sings the praises of a fresh-shucked natural oyster, Euro’s all-you-can-eat festival opener’s iteration of Kilpatrick is slightly different. “We refine it a bit,” says Stewart, “we’ll confit the shallots in butter and they’ll go on top of the oyster along with Worcestershire sauce, cracked black pepper, we’ll crisp up some pancetta lardons and we’ll finish it off with a little parfait crumb.”

And the tempura? Stewart reckons you can’t go past a battered oyster matched with a beer. “Oooof, there’s nothing like a lightly battered Bluff oyster with a nice lil’ aoli or gribiche dressing – it’s just stunning.”

We can’t argue with that.

Champagne
Around 70 million years ago, the Champagne region was under water. Earthquakes around 10 million years ago brought that salty, mineral rich, chalky soil to the surface so that the soil drains well, the grapes absorb a hint of ocean flavour which translates into your glass of bubbly. So oysters and champagne are a match made in heaven. Or, more accurately, the sea.

Whisky
When the Glenmorangie whisky distillery in Scotland decided to tackle the organic barley waste they were releasing into the Dornoch Firth, they decided to reintroduce the oysters that had been fished to extinction over 100 years ago. The shellfish feed off of the barley particles and also make the firth more hospitable for themselves by cleaning the water. The partnership works just as well in their restaurant. “Whisky kind of cures the oyster,” says Stewart. “There’s a lot of sugar in whisky and that salty-sweet number seems to work. People get a bit of whisky and pour a little bit over the oyster and let it marinate and then knock it back. Stunning.”

Whisky fans have been known to finish off by drinking from the shell to get the most from the pairing. And we are all about getting the most from our oysters.

Rosé
The lazy sommelier’s favourite drink: a chilled, dry rosé goes with pretty much everything. “Rosé goes with most things, right? Certainly on a hot day when you’ve got a nice cold rosé. No better way to match that than a dozen freshly shucked oysters.”

Beer
One beer being served at the festival is a famously hoppy Emerson’s. And that bitterness works well with an oyster – if it is prepared right. “We’ll serve oysters five or six different ways and match it with the different types of beer. Like the stout which is a really good match, and the pilsner. Pilsner and seafood is great so with the pilsner, we’d probably batter them more so that the crisp batter with the beer really works.”

Sherry
Having discovered the combination in a Melbourne restaurant, Stewart’s must-try beverage match recommendation is sherry – the sweet, fruity flavour goes down a treat with the sea-flavoured oyster. He too was sceptical at first, but he assures us it packs a punch. “Sherry is a beautiful match. A little dry sherry…They said ‘would you like to try it with sherry?’ and I said ok, and it worked. It really worked. That sweetness and the salty really go together. ”

If you aren’t a fan of oysters but see the rest of us slurping them back with glee and want in on the fun, Stewart has some advice for how to become an oyster fan.

“For people who don’t like oysters, they probably don’t like them for either of two things. Texturally, they’re a bit different in the mouth.”

And their flavour is also dependent on their freshness, says Stewart. Getting a bad one is off-putting.

“When the oysters are opened up fresh, literally a couple minutes before serving them, they’re delicious. There’s no doubting it. They are absolutely stunning.”

Think of oysters with batter and toppings as gateway oysters. You’ll be a fan in no time. If not, there’s more for the rest of us.