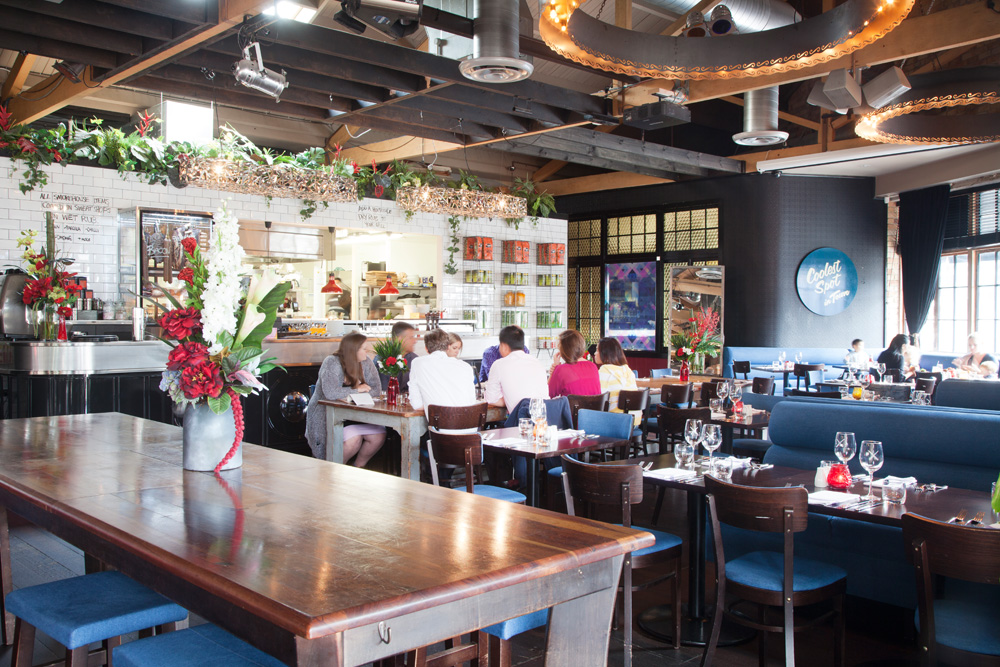 Around a month ago, hospitality operators Barworks called time on Sale St, the bar and restaurant originally opened by Luke Dallow in 2008 and which they’d taken over last October. For a fortnight, behind closed doors, the much-loved venue underwent a refit; a week ago it reopened with a new name – Sweat Shop – and an exciting new look.

First, let’s get the obvious question out of the way: what’s with the name? Turns out, it’s a reference to the building’s previous life as the premises of Ross & Glendining, once New Zealand’s largest clothing manufacturer. Here, machinists produced denim workwear for the shipbuilders and yachties down the road in Westhaven.

You’ll see nods to the building’s heritage throughout Sweat Shop, in details like the denim-blue upholstery in the new restaurant area, where diners can chow down on bar snacks like the pastrami and beer bread (made with Sweat Shop’s own-brewed beer) pictured above; hearty salads (such as the “twisted nicoise” with maple salmon fillet, also pictured), gourmet pizzas and burgers.

Outside the new open-plan kitchen, a meat ageing cabinet full of bacon, pastrami and ribs makes it plain: this place is a meat-lovers paradise. American BBQ-style smoked meats are a specialty here. Have them in a sandwich (lamb shoulder with smoked cheese, Russian dressing and slaw; pulled pork with tomato and rocket on rye) or as is – spice-rubbed, slow-cooked and served with coleslaw and cornbread.

The boutique brewing operation started by brewer Mike Stimpson under the Sale St mantle has been improved and extended, thanks to a shiny new rig capable of producing around four times as much beer as the old one. A house-brewed pale ale, American pale ale and lager are permanently on tap and the bar also sells refillable growlers to take home. These are approachable brews designed with wide appeal in mind, but craft-beer naysayers still have their choice of Monteiths, Heineken, Tiger and more. There’s a well-chosen wine list, plenty of summery cocktails, and a thoughtful list of non-alcoholic drinks too.

Other changes to look out for? Pool and ping-pong tables; a new sound system; and a larger, brighter deck with plenty of heaters and a retractable roof (set to be installed soon). Roll on summer.