Ain’t No Taco: Symonds Street gets a new taqueria with a twist

Peter Barton, co-owner of Burger Geek, opens a taqueria a few doors down the road 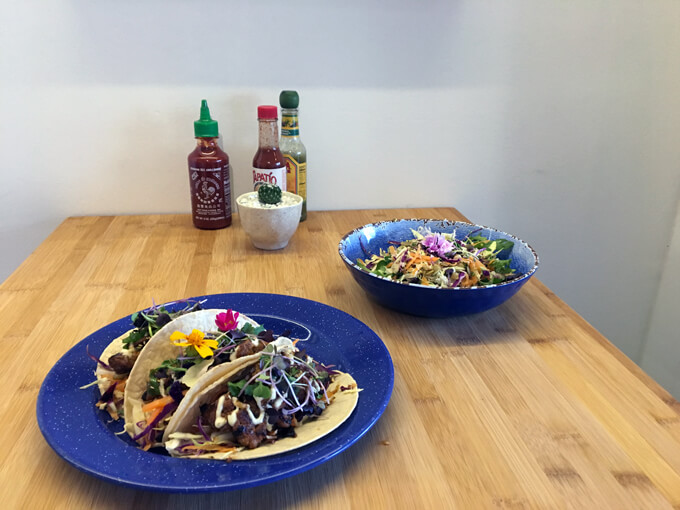 Peter Barton, co-owner of Symonds Street’s new taqueria Ain’t No Taco, says his wife Pene lets out a little sigh every time he decides to open a new restaurant or food truck – she thinks he only does it to “get new kitchen toys to play with”. Well, she might be right; his most recent purchases were two slushy machines (that he won’t actually be using because the noise annoys him), and a Traeger smoker which takes up a significant portion of his tiny taco kitchen. He justifies the latter by telling me he’ll use it to cook meat for Ain’t No Taco, and smoke bacon for his other restaurant Burger Geek, a few doors down.

The dining room here is split into two levels: a sparse downstairs featuring a large communal table, and above that, a cozy mezzanine. Little pops of orange, pink and yellow, alongside hand-painted murals and cacti give warmth to Barton’s cleanly designed furnishings.

Barton describes the tacos and salad bowls he’s offering as “Monday to Thursday food” (and his burgers as “weekend treats”). The menu is playful – taking influence from Korea, California, Jamaica and – obviously – Mexico, with filling options like jerk tofu and pork bulgogi. More than 60 self-serve hot sauces run the gamut from fruity, to sour, to blow-your-head-off-hot. Barton’s friend imported them from the States especially for the restaurant, then Barton made all of his staff try the hottest one – which measures one million on the Scoville scale – as a slightly satanic initiation to working with him.