Sergio Maglione: My Life in Food 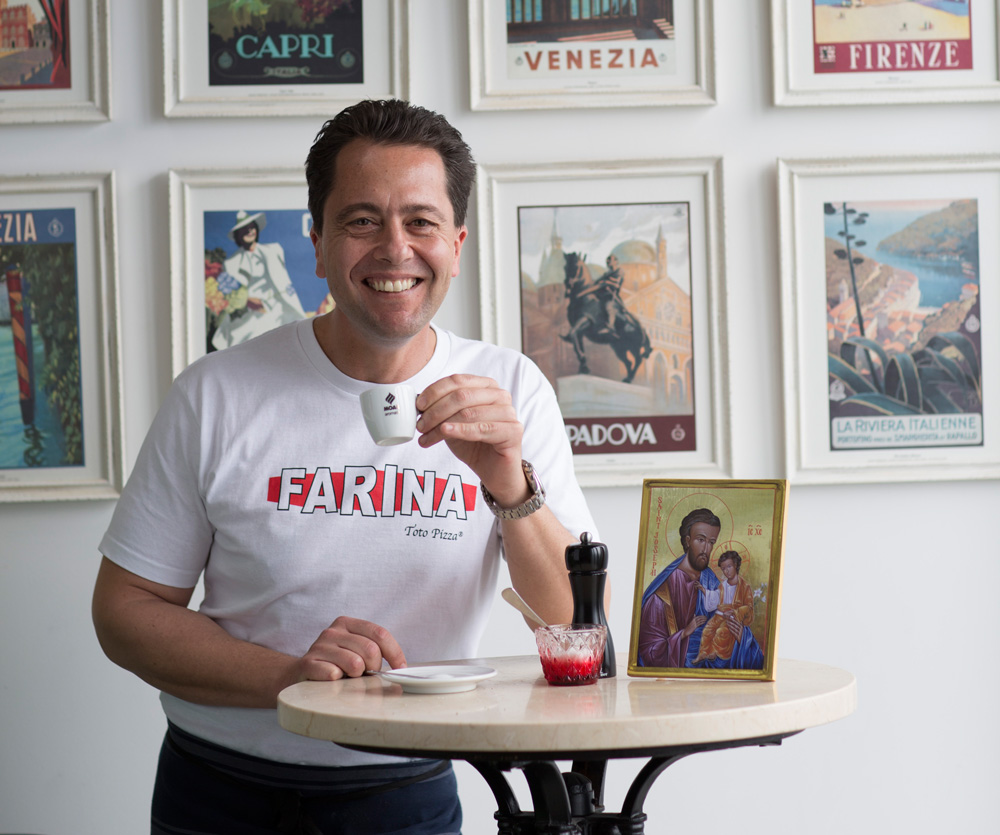 As told to Delaney Mes.

Let me give you an idea of Farina: it’s about simplicity of Italian food. It doesn’t have to be complicated. Farina is a modern Italian trattoria, like being in Italy.

We have a passion about the produce, and with the open kitchen it is a pleasure to see the customers and to cook in front of them.

My baby, though, is Totó Pizza. It’s a separate business from Farina, but we serve the pizza here. Metre Pizza, it’s a thing that started in the south coast of Italy: the Sorrento Coast, Naples.

This guy, his name is Luigi, but they call him Giggino — it means “little Luigi”. He started the concept, probably when I was just born, 40 years ago plus. Anyway, around then he opened this little pizza place — a table in the street with a bamboo fence. That was the start of the concept; now it’s a five-storey building with six or seven pizza ovens. All up the Amalfi Coast, the concept developed.

When I was at Totó doing fine dining, we had three levels in the building. We thought, “Let’s make something out of the space.” The concept was to deliver pizza by the metre. The largest order we had was 72 metres, for one company. We now have three ovens, we do 200-300 metres a day. I want to double that. The key is just the best ingredients, the best produce.

My great-grandmother had restaurants; it’s in the blood. Food was always the main priority in my family. We were always surrounded by good food, always eating top-quality, fresh food. One of my earliest memories was when I was three or four years old, cleaning up sardines for my mother and great-grandmother.

I came to New Zealand 20 years ago and worked for Antonio [Crisci], my uncle. I worked my way up, learning on the job. My sister was here then, she was a chef, but she’s left. I looked after the wood-fired oven at Non Solo Pizza; I became head chef, then was head chef at Totó, too.

I’m a seafood freak. My family has always eaten lots of seafood. Anything fresh, and any shellfish, I love a lot. If I had a signature dish it would have to be seafood.

One of my favourite dishes is spaghetti vongole (with clams). In the shell is the water of the sea, and that seawater goes in the pasta. You catch the real seafood flavour, just with garlic, extra virgin olive oil, fresh chilli, Italian parsley and a splash of white wine. It’s simple, it’s full of flavour. People love it.

My favourite utensil in the kitchen? My knife, of course. But my tongs, like giant tweezers, not normal tongs, are the best. It’s like your finger, but bigger. You can twist pasta, use it for grilling, to pick up food. I can’t do a service without it.

To be honest, with a new restaurant, I don’t eat out much. When I do, I like casual, you know? I like Asian-influenced food. My favourite place at the moment is Blue Breeze Inn. I like to relax, have a nice glass of wine.

We have a stall at Taste of Auckland this year. Obviously we bring our pasta machine, and I’m going to try to get a wood-fired oven and do some stuff with that. Farina is all about being connected with the public, with the open kitchen, so I’m going to try to organise a way to show that.

My best food experiences are always around which product I can find, what produce. Any place that has a big market, I love. Nothing fancy, I just like to buy the best produce. I cooked for Team New Zealand a couple of years ago, in Venice. I was going to the market every day. It’s the best experience, finding and buying great produce and cooking it for people, for friends. When I’m finding great produce at a market, that’s my energy, you know?

Sergio Maglione is one of the headline chefs at this year’s Taste of Auckland, November 13-16. tasteofauckland.co.nz