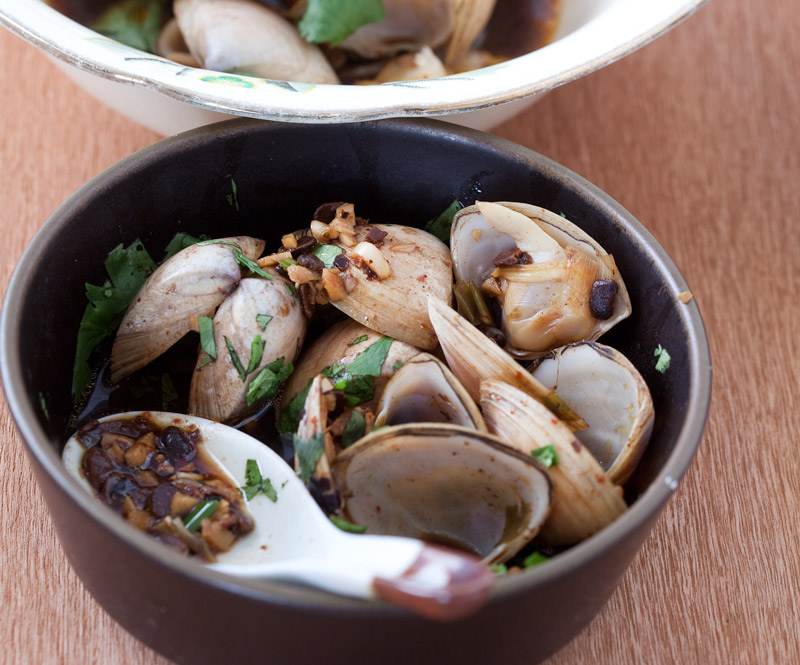 A Chinese take on a Spanish dish.

I’ve never been very good at cooking Chinese food, which when I think about it is really weird. I’ve been to China several times, mostly for the food, and possibly my favourite thing about Auckland is the diversity of Chinese restaurants. I eat Chinese food often, but only when I’m out.

For some reason, I’ve never taken to cooking it. I cook everything else — I even plant Thai basil each year because it’s really hard to buy. But Chinese? It’s always seemed that you need a thousand different jars of ingredients (and I never seem to know what they are). Which is slightly true, but only in the way that you need multiple ingredients to make, say, clams à la marinière, which I first ate in Alicante, Spain, and is a dish that takes me straight back to a warm, breezy evening in a small courtyard on a hill in the old town.

I blame experiments in “stir fries” at cooking class in Form 1. We used to trundle off to this old building in New­market where we spent half the term cooking in a bright, sunlit room. It seemed like a wonderful bunk to me, since most of the things we cooked involved baking, and my mother rarely baked. But we also cooked stir fries, in big electric fry pans, with lots of white rice and frozen peas and beans and it tasted bland to me even then, so it became a sort of mental block, which is silly, really, because it hardly counted as Chinese food. It doesn’t help that it took me a very long time to learn to cook rice. (Failsafe method: boil for five; steam for 10.)

My partner cooks Chinese very well, and so generally I just leave it to her while feeling slightly mystified by her prowess. Accordingly, we usually buy some Chinese greens each Saturday from the very nice ladies from Fresh Gardens at La Cigale, which find their way into a dinner or two.

So the other day I found myself in Newmarket and  realised all we had in the fridge at home were some Chinese greens — choy sum and gai laan — and that they needed eating and that we needed something to go with them. Something Chinese. So I took a deep breath and decided on clams with black beans and chilli, which I ate in China a few months ago.

After a fast Google, I rushed over to Smelly Alley — the alley that runs between Teed and Kent Sts and smells, appropriately, like a Shanghai wet market — to buy clams from Seafood Harbour. Seven hundred and fifty grams of the finest Marlborough diamond shell clams you can buy: sweet, meaty, $15 a kilogram. Over to the Tofu Shop for chilli sauce. Coriander from the vege shop. Then, I spent the afternoon worrying about what could go wrong, since nothing makes me grumpier than a crap dinner.

Fortunately, it didn’t go wrong. Even my stove-work was okay — apart from heating the frying pan a bit high and nearly burning the garlic and chilli. The clams were sweet, the sauce was salty and marmitey with a fabulous salty-spicy hit, and I realised that, in principle, it was exactly — exactly! — like cooking clams à la marinière, only there were different ingredients at play. Different ingredients that, just maybe, I think I might like even more.

Clams with black beans and chilli

Buy the freshest clams you can — Seafood Harbour’s are in big tanks and are brilliant. Give them a light scrub; they’ve already spat out their sand. Soak a couple of tablespoons of preserved black beans in water for 10 minutes, then smush them in with the chilli sauce. Heat your wok — or frying pan, if you don’t have gas — and fry off chilli and garlic, followed by chopped leeks. Add the black bean/chilli mix for a few seconds, then the clams. Add a tablespoon of Chinese rice wine, followed by half a cup of stock and three teaspoons of soy sauce. Put a lid on it, reduce the heat and cook for four or five minutes until all the clams have opened. Scatter with coriander. Sublime.