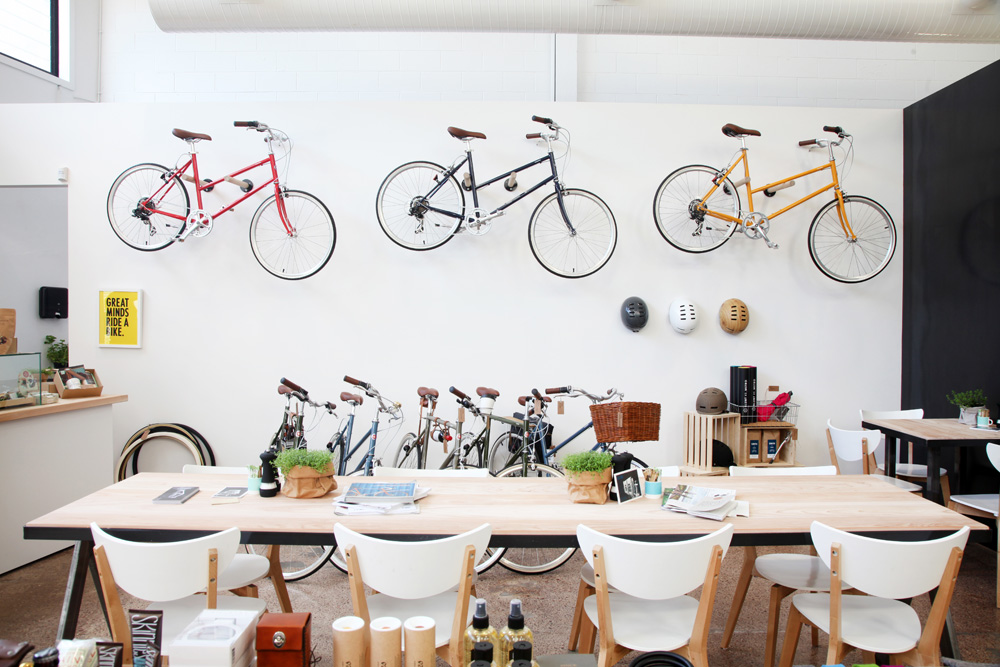 Drew Duff-Dobson is a happy man. His two great loves are coffee and bikes, and at his new café, Blend, he gets to spend each day surrounded by both. After more than 20 years in and out of the coffee industry, he recently founded his own coffee company, Smith. The company logo? A stylised bicycle, of course. “In the back of my mind I knew I wanted to do something that combined the two, but it wasn’t until I visited Tokyo that it started to come together.”

Did we say two great loves? Make that three. There’s also travel, much of it facilitated by Drew’s wife Sarah, a business manager for Lonely Planet. Earlier this year the couple found themselves at the Japanese flagship store of cult bike brand Tokyobike; within weeks they’d come to an agreement to sell the colourful cyles, built for comfort rather than speed, here in Auckland.

Thus was Blend born. The espresso bar/cycle store lives at the back of the new Shelter complex on Mackelvie St, once home to a rundown laundry operation, now a shared retail space showcasing design and fashion brands including Taylor, Children of Vision, and Christchurch homewares company Foxes Den.

As well as Smith coffee (just a signature espresso at present, but filter and “flavour of the month” blends are coming soon), Blend sells a small range of sandwiches, cakes and pastries. Suppliers include Bread & Butter, Bluebells Cakery, Little Cake Kitchen and Craft Kitchen, the Ponsonby Rd café where the baking is made with their own hand-milled organic flour.

If all that sweet stuff is a little much early in the morning, Drew suggests the Helsinki Breakfast: “It seemed like at every café we went into there, people were eating a cinnamon roll and a small bowl of muesli – they used a coffee cup – for breakfast. We brought the idea back with us.”

Their coffee is ethically traded (“that means the beans can be a blend of Fair Trade, Rainforest Alliance or whatever, but there’s a ‘social premium’ paid on all of them”) and the coffee cups are compostable. The gorgeous, Scandinavian-pale tabletops are made from oiled macrocarpa, and the counter is on wheels so Drew can serve espressos from the front of the store between 7 and 9am. He closes when The Shelter does, around 6pm, and opens weekends too. And, yes, he’s the sole staff member.

All this, and a fledgling coffee company too? It sounds exhausting. “Sure, it is, but I’m living my dream. I’ve poured my heart and soul into this business and I’ve never been happier.”