The ugly friend: From a carpark to apartments

A carpark-building makeover employs an ingenious engineering solution but is it great to look at?

Let’s get this out in the open up front. The new building at 206 Victoria St West bordering Victoria Park isn’t going to win any beauty contests. The big rectangular frames that march across its face are supposed to help disguise the bulk. In truth, they make the building look like a badly sewn patchwork quilt.

To be fair, JCY Architects has done its best to tart up what was possibly one of the ugliest carpark buildings in Auckland — the five-level eyesore on the corner of Victoria St West and Drake St adjoining Victoria Park Market.

The architect’s approach to this design problem has been to encase the carpark in a Webforge aluminium grille façade that aligns with the streets on both sides. For variation, there’s some de rigueur rust at street level — the now-ubiquitous Corten steel that seems to be a must for any building that wants to show true urban grit.

Here, with sturdy steel columns and  K-bracing panels also exposed, gritty is certainly what you get — at least for the lower six levels. What is pleasing is that the architects have revived the street edge of the ground floor with a row of shops on the Victoria St side and others on Drake St.

Less pleasing is the default glass veranda roof along the Victoria St footpath. These glass canopies are everywhere in the CBD, ostensibly to flood the footpath with light. What’s wrong with a bit of shade, or variations on it, and some more imaginative use of other materials?

The steel structure that straddles the existing concrete carpark, with grunty K-brace steel trusses spanning level six, suspends another level of carparks as its underbelly and supports five levels of hotel above. As an engineering solution for adaptive re-use of a carpark, it’s ingenious. Architecturally, less so. The trusses thread their way through the building mostly concealed, but sometimes they pop out from the inter-tenancy walls. The effect is ungainly, although architects and others will tell you it’s a deliberate feature that lets the structure speak. In one room I look into, guests navigate an A-frame portal in the middle of the room created by the diagonals of adjoining steel K braces. They don’t seem to mind.

Developer Mansons TCLM’s original plan in 2014 for this ugly-duckling make-over was “The Boutique” 39 two- and three-bedroom 80sqm to 115sqm apartments for rent rather than sale built above the carpark. The scheme highlighted the gateway corner location of the site and that Auckland Council was as keen as any to see one of its hideous planning mistakes rectified. It granted resource consent for extra levels — 11 — at the eastern end to sweeten the deal. In 2016, the scheme changed dramatically, with Hong Kong-headquartered Swiss-Belhotel International — chairman and president New Zealander Gavin Faull — renaming the building Swiss-Belsuites Victoria Park and taking all for a 4.5-star hotel. The result is spacious accommodation, including 12 one-bedroom, 23 two-bedroom and five three-bedroom apartments. The selling points? Undoubtedly the spaciousness, including the large decks (one suite’s deck area is a whopping 70sqm) and the vistas, especially to the north across the tree-lined Victoria Park, with the harbour bridge popping up above the greenery. 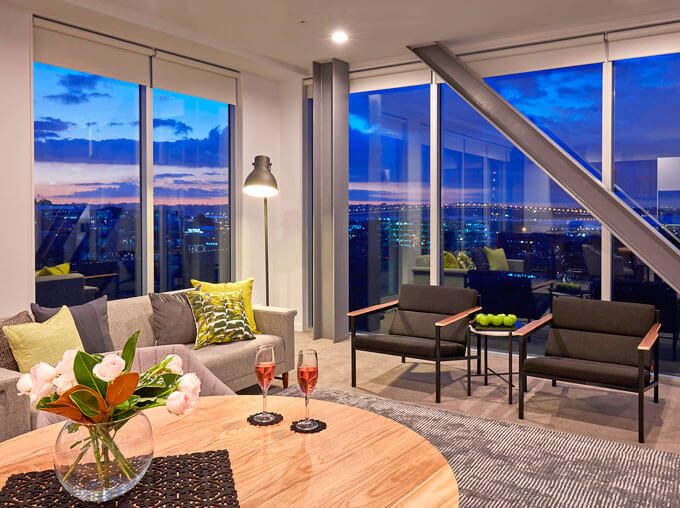 Then there’s the adjacent Victoria Park Market, which began in 1904 as Auckland’s first rubbish depot, where the city’s garbage once burned in “The Destructor” beneath the landmark brick chimney. Around 1908, the heat from that burning helped generate Auckland’s electricity supply, but the generators were switched off in 1913 and a council depot and stables were built — the  stables housing the horses that hauled the rubbish wagons. The burning stopped only in 1972, although the complex continued to act as a rubbish collection depot until 1981. The iconic chimney was to be demolished, but following a public outcry, the complex was turned into Victoria Park Market in 1983 — an outdoor artisan/craft/souvenir/clothing market. For a time it was a vibrant Auckland attraction but was eventually closed in 2008, by which time it had devolved into a tawdry $2 shop precinct.

“Auckland icon returns to its former glory,” proclaims the website, but while the place has certainly been transformed into a range of business, food and beverage and retail tenancies, the overall vibe is bleak and ghost-town like. “One of the cultural centres of Auckland, accessible to all, has been reduced to a shadow of its former self… it’s disappointing and more than a little sad…” says a recent Trip-Advisor review.

But Swiss-Belsuites is keen to work with some of the new market’s tenants to create value for its guests — having various hotel services such as food and beverages, conference facilities, gym and spa offered in the immediate surrounds. An extended hotel combining with what the city has to offer is a terrific idea.

It’s also great there’s at least one developer in Auckland attempting to confront the issue of what to do with ugly carparks that blight our city and yet, in the absence of proper public transport, continue to be in demand. The latter point is underlined by the extra floor of carparks added to the building, initially for the apartment residents. When the use changed to the hotel, the carparks were surplus to requirements, but were immediately snapped up as corporate carparks for surrounding businesses. Herein lies an ongoing problem — parking buildings, because of their low floor-to-ceiling height and minimal structure, are notoriously difficult to adapt to another use. If our council had an eye on the coming transformation to a car-free-ish future, it would be more careful about how it allocates precious city space for empty, parked cars. Perhaps it could introduce design constraints to make these least glamorous of building types more adaptable to re-use in the future.

Better still, couldn’t we start thinking of parking buildings as something sexier, structures that mix uses in ways we haven’t seen before? Rather than being a piece of traffic equipment, a bland box of cars, perhaps a parking building could include a piazza in the air. After all, a parking building is in essence public space.