ATC’s new waterfront theatre has a state-of-the-art auditorium nestled inside a subdued exterior.

This article is published in the October 2016 issue of Metro. Photo by Simon Devitt (and supplied).

Gordon Moller had the odd crisis of confidence when designing Auckland Theatre Company’s new home in Halsey St, next to the ASB’s oddly box-topped corporate headquarters on North Wharf.

Although that’s overstating it. Moller, who is known for the most thrusting of architectural gestures in Auckland — the Sky Tower — doesn’t do crisis of confidence. These were more like fleeting moments of doubt.

The first was after lobbying by Peter Bartlett, emeritus professor at the Auckland School of Architecture and a specialist in the design of performing arts centres, especially their siting and adaptability. “Peter said, ‘You’ve got to design this most amazing, creative, new-wave theatre.’ He wanted to open it to the street. He wanted all sorts of things.”

By this stage, the driving parameters for the $35 million theatre, designed in association with BVN Architecture, the Australian architects for ASB’s headquarters, were already set.

Theatre director Colin McColl had been explicit about the fundamental brief: for the spoken word; intimate and immediate in terms of the audience relationship with the actors and the performance.

A state-of-the-art proscenium arch has to be a welcome arrival for the Auckland theatre scene.

Moller checked in with McColl and general manager Lester McGrath. “I said, ‘You realise we are creating a traditional theatre.’ Lester said, ‘That’s what we do’.”

Forget about avant-garde. What you get is a stage, a proscenium arch over it, and an auditorium. A missed opportunity, maybe, but a state-of-the-art proscenium arch has to be a welcome arrival for the Auckland theatre scene.

There’s the traditional hierarchy of seating, even expensive boxes with leather chairs at the side. “If people want to ponce,” says Moller.

The 668-seat curved auditorium with stalls and circle is magnificently opulent, with a touch of flamboyance in its array of coloured seats, each with an air-conditioning outlet and LED light beneath.

The tiered flooring is deliberately timber to amplify the sound of foot stomping when there’s a standing ovation or encore call. Everything is in the detail, and everywhere in this building it’s meticulous. 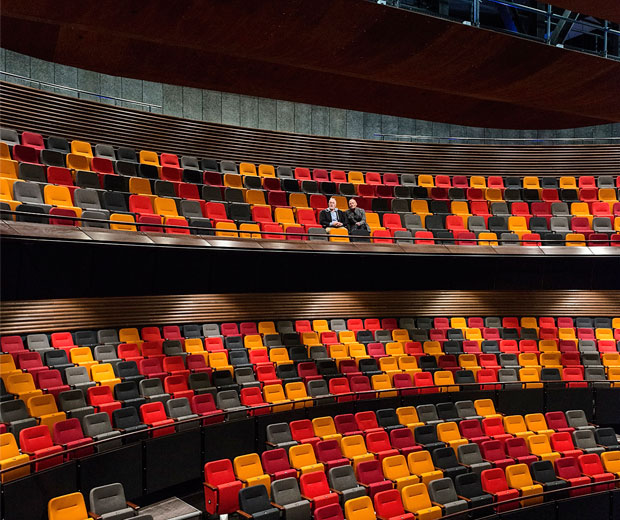 The auditorium delivers on intimacy — no centre aisle, 24m wide and just 18m from the back wall to the front of the stage. Good for the spoken word? Moller demonstrates with a clap from the stage.

The reverberation, reflected off carefully positioned Corten-steel panels at the 240-seat circle level and off the auditorium’s side walls, lined with dark-stained cedar, then absorbed at the rear, has a satisfying 1¾-second decay.

There is also the traditional effacement of the mechanics of scenery by the proscenium arch and curtain, here assisted by rigid movable tormenters: the width of the proscenium frame can be adjusted to 12m or 15m.

The stage itself is massive, almost as big as the auditorium — 12m deep and with a 4m backstage: big enough for ballet, and with a floor sprung for dance. The fly-tower height is impressive: 16m up to the grid, then another 5m and a vast collection of rope lines, blocks and counterweights to make curtains, lights, scenery and, no doubt, sometimes people fly.

Concealed above the auditorium ceiling panels are three lighting gantries. There are 24 trapdoors in the stage floor, plus a raising stage in front of the proscenium: an extra apron on which actors can step out into the auditorium.

Moller’s other moment of doubt came when trying to make the entry work on an overcrowded ground floor — resolved by lifting the auditorium to the first floor. The result was an auditorium inside a glass box opening to the street.

The glass box allows for a 70-seat cafe plus outdoor seating on the corner of Madden and Halsey Sts, plenty of room for the box office and a bar area that can open to the courtyard and adjacent laneway by the ASB building next door. A bridge connects to ASB’s existing 200-seat theatre. 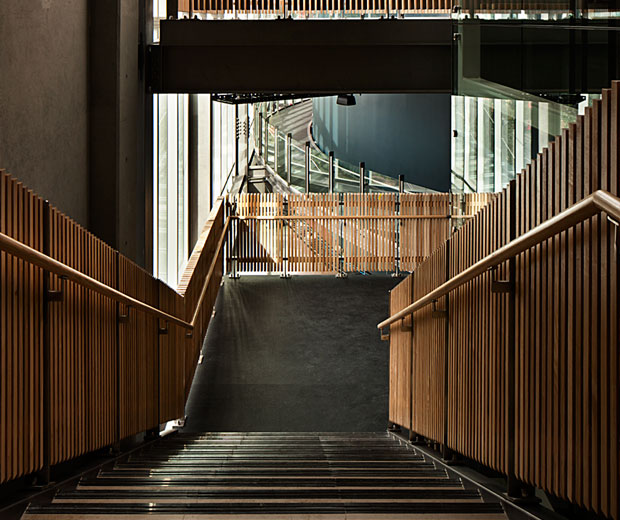 The courtyard space will feature a Robert Jahnke-designed 6.4m pou made from Corten steel and laminated totara.

The design herds patrons to the first and second floors via what Moller calls the cattle race or sheep pen — a wide stair and mid-level landing, the balustrade a line of vertical timber battens rather than glass. A tactic, he says, to make the throng feel secure.

Access to the stalls or circle is either side of the auditorium via crossover galleries following the curved outside wall. From here, patrons can appreciate the volume of foyer above and below and look out of the glass box to the city.

Plus get up close and personal with the 9m-tall, 30m-long Leo Villareal kinetic artwork comprising 9800 coloured LED lights, set in vertical lines over three levels of the auditorium’s curve.

When fully programmed and running 24/7 I’m told it will look like a pulsing amoeba.

There’s no doubt the foyer will be lively, possibly overbusy with billboards: ASB Waterfront Theatre, donor boards, AUT University Atrium, another board with some 2000 names instrumental in bringing the building into existence.

Too much? Possibly, but this is theatre.

There is Hollywood lighting and brass on the bar shelves, video screens to highlight upcoming productions and, oh yes, on level 3, where there’s a function room and deck, some of James Wallace’s extensive art collection on specially designed sliding panels. Too much? Possibly, but this is theatre.

Moller is philosophical about some of the corporate compromises the building has had to make as the theatre becomes a bigger business. In one of his early sketches, he had the whole of the exterior as a bas-relief. “I would have made it a lot more flamboyant.”

When I visit again, the Villareal lights make an elegant shimmering curved curtain, blue and white, inside the glass box — not too flashy, perhaps deliberately so as not to upstage the theatre’s corporate neighbour. When the technicolour amoeba comes out, well that should be dramatic.