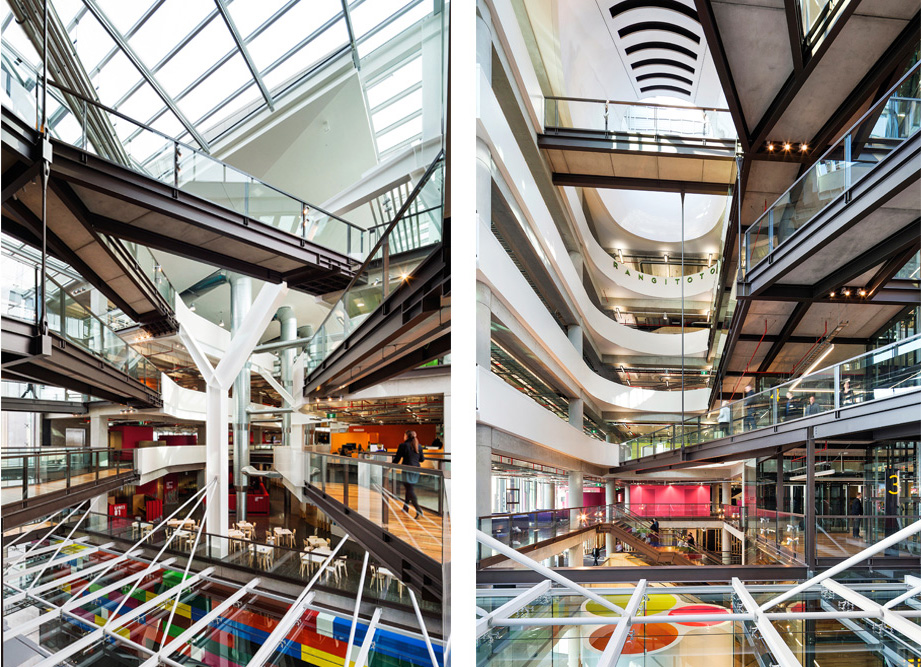 There were mutterings on the night when ASB North Wharf won the big one — the New Zealand Architecture Medal. Weren’t some bold new campus buildings in Auckland and Wellington more deserving of the New Zealand Institute of Architects’ supreme award for 2014? But ASB’s new headquarters, awkwardly prominent on Auckland’s Wynyard Quarter waterfront, was always a frontrunner, even before it picked up sustainability, commercial and interior awards earlier in the evening.

Perhaps there was a pang of resignation. Auckland Savings Bank — founded in 1847, just seven years after the signing of the Treaty of Waitangi — was 75 per cent sold off to the Commonwealth Bank of Australia in 1989. So maybe it shouldn’t surprise that an Australian architectural practice, BVN Donovan Hill (in association with New Zealand firm Jasmax), should storm our awards.

The Aussies have been showing us how to do big buildings — the Auckland Art Gallery, the Auckland Business School — for some time. Something of the Australian swagger seems to have rubbed off on ASB North Wharf. Bold, brassy, this is a building that parades self-assurance. “I have no issue with anyone thinking whatever they like about it, but I think compositionally it works really well,” says BVN lead architect James Grose.

Of course, we’re talking about the ungainly eight-metre cube perched 50 metres high atop a fluted, pyramid-like roof; the louvred ventilation box appears to spring from the modernist adage “form follows function”. Engineers set the parameters — the box had to be that high and that size to naturally ventilate the building and ensure its badge of sustainability.

Inside, the box is fed by a cone-shaped funnel drawing warm air up through the building via the vast central atrium, extending over four floors. “There is quite a nice functional poetry that has made the shape of that building what it is,” says Grose.

Some may appreciate the purity of the cube in the sky, but its brutalist effect is somewhat dampened by the “Helioflek” reflector perching on top. Designed to direct daylight into the building and apparently speaking the language of spinnakers and lighthouses, it’s a jarring juxtaposition. 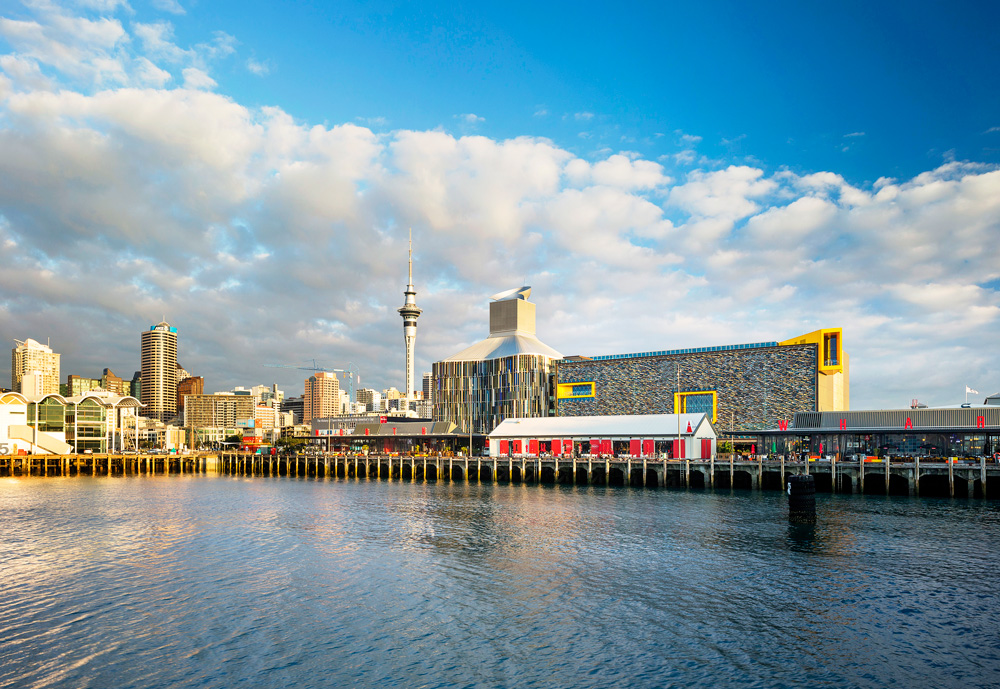 The building’s look has also been shaped by others. Waterfront Auckland wanted a “marker build-ing” on this prime waterfront site. And the two clients, ASB and the building owner, Kiwi Income Property Trust, also wanted to exploit the “iconic” corner site on North Wharf. They were also keen, and ASB was especially so, that it should express a sort of New Zealandness about it, as opposed to a “bland internationalism”.

An Australian expressing New Zealand­ness sticks in the craw a bit, but Grose set about the task armed with his own design philosophy, which says buildings should, in an abstract way, be referential to their context and “have readings in them of nature”.

Enter the pohutukawa, which incidentally was also the inspiration for the Australian architect Richard Francis-Jones when designing the Art Gallery. For ASB North Wharf, Grose seized upon the pohutukawa leaf — in particular the “leaf miner” weevil that chews irregular holes in the foliage — which he had been alerted to through the work of New Zealand artist Liz McAuliffe. There was also a functional purpose — the need to provide 65 per cent shading of the north-facing glazing to ensure the natural ventilation could operate effectively.

The result — 4500 pressed, bent and holed anodised aluminium blades in silver, gold, bronze and dark bronze suspended in a tensioned-wire “net-like veil”, reflected and shadowed on the glass behind — produces an extravagant effect. Grose says he likes the ambiguity — that people may see the pohutukawa allusions, but that it could also be about the rippling water of the Auckland harbour. “It is clearly a natural reference. When you are inside the building, it feels like you are working inside a tree canopy.”

Grose extends the pohutukawa metaphor to the vertical sun louvres arranged around the corner section of the building. They mimic serrations of the bark, he says, “which often demonstrates a diverse, tactile verticality”. Architects should remember that sometimes you can beat a metaphor to death.

The building is also a prominent billboard for the bank with its “ASB” logo emblazoned on its eastern and western faces and three ASB yellow portals — “open-air perches” — punctuating the northern face.

Transparency, “a defining cultural trait” apparently referring to the bank’s ethics and business practices, is another architectural theme. It’s expressed most dramatically in the view up through the glass box of Waikokota Lane that separates the two parts of the building. Here one can peer into the building’s lungs all the way up seven levels of open atrium and its crisscrossing bridges to the funnel sucking the air skywards.

The lane itself — even with Michael Parekowhai’s Achy Breaky Heart wall of over-sized, stacked multicoloured, Cuisenaire rods — is bleak. But Grose says give it time. Eventually, the lane will join Logan Campbell yard, which connects the ASB and the proposed new Auckland Theatre Company premises next door.  Expect vibrancy, activation and other laneway cliches as the lane extends south in the rapidly expanding Wynyard precinct.

By far the most intriguing aspect of this building is its interior — a corporate experiment in productivity laid out as a multi-level adventure playground of surreal furniture, an environment that liberates the workplace by expressing “wellness” — natural ventilation, and plenty of daylight and sunlight.

Then there is the furniture. In this brave new world, no one has their own desk. Workers choose instead each day from a menu of desk-types — the kidney, the cockpit, the snowflake and the ear chair, to name a few — as to how and where they’ll work.

It’s not as anarchic as it sounds, with business units organised into neigh­bour­hoods to further differentiate types of work. This “activity-based working”, or ABW, is meant to generate collaboration and collegiality. The array of open staircases and bridges that connect working floors are designed to encourage walking, rather than taking the lifts. They also encourage “bump” — spontaneous encounters between workers to spark new ways of getting the job done.

With its themed “boathouses” — The Deck cafe, Aqua, Motoscafo, City, Container, Rangitoto — it sells itself more as a sort of eco-friendly garden of earthly delights than a hard-nosed financial institution.  Still, as a work environment, it’s hard to imagine a cooler, funkier place in the city, not mention the best BBQ deck with a view in town.

Notably lacking, however, was the ability to personalise one’s desk. Then I spotted a bay of lockers sporting graffiti, where employees had claimed their small storage space as their own. If ABW is the way of the future, this was a sign it might need a few tweaks.