Right up our alley

This article first appeared in the September 2015 issue of Metro. Photos by Simon Devitt.

Lanes add a sense of intrigue to Ponsonby

“We call that the alleyway,” says Jasmax lead designer Nick Moyes. “That was probably the hardest thing to get through the council.” We’re standing on the corner of Picton St looking across Ponsonby Rd to the “Red Brick” building on the corner of Richmond Rd, home to the wildly successful bar Golden Dawn. The gap — 1.8m at its widest — separates the quaint 1911 gabled façade from the rather imposing mass of the building next door, extending from there to the next corner, Mackelvie St.

Known as Lot 3, the new bulk has an odd effect, at once proclaiming itself as an alien in the gentrified historic Ponsonby streetscape, but also very much belonging. Is it a trick of the light? Or the colours — the vertical terracotta blades mimicking the warmth of the red brick and black zinc the grey plaster?

These are questions to return to. Now I must know why the council objected to the alleyway. “That’s where you get rapes and muggings. That’s where it’s all going to happen, down there,” says Moyes. They got through that. He likes the narrowness — less than 1.8m, in effect, because the requirement width has been cheated a bit by an indent into one of the alley’s walls. “If it had been much bigger, it would have been too generous and it wouldn’t have that intrigue.”

It’s not as dangerous as it might seem; as a small sign indicates, the area is under 24-hour CCTV surveillance. Those too afraid to find what’s at the end will miss out on a hidden gem and by far the best aspect of this building — its backside.

The alley joins another, or rather, a laneway on a diagonal axis from Richmond Rd beside Golden Dawn through to Mackelvie St. It’s a laneway because it’s wider — 4.3m at its narrowest. You can get scientific about laneways, as Moyes has in research in Melbourne, the laneway capital of the world that everyone wants to emulate. Using a laser distance meter, he found a range of widths of between 4.5 and 7.5 metres and generally a 3:1 height-to-width ratio. Also, all the crucial design elements of laneways are at the ground plane, where the key is to encourage activity. Generally, if you look up in a laneway (which mostly people don’t), the buildings are horrible.

Look up in this new lane and there’s a four-storey zinc-clad wall with vertical standing seams. It’s punctuated by rectangular windows of various sizes, with some protruding as boxes. It’s not horrible, but it’s not pretty either. Which is the intent. Moyes says the look he was going for was “gritty”.

At one stage, the team asked the cladding manufacturers if the zinc could be laid on the floor and walked on to make it a bit beaten up. The manufacturers were having none of it. The zinc went up shiny and new, but the alleyway and the lane do look raw and gritty.

“We think of the lane as Mechanics Lane,” says Moyes. That’s on account of the site’s history. In the early 1900s, it was a workshop to service and maintain electric trams. When buses replaced the trams on Ponsonby Rd in 1949, it became a car yard and motor vehicle service station, then a Mobil petrol station and, in 2010, a pop-up Mini showroom.

In their design report, the architects said: “Varied depths and textures of the façade, together with a material palette of rough and raw materials, engender the sense of the grit behind the glamour of Ponsonby Rd.” Fair enough, although it may labour the point to say the boxed windows drew their inspiration “from tool drawers within a mechanic’s workshop”.

The real delight of the laneway, which isn’t quite complete, is how it incorporates a small courtyard that gets flooded with afternoon sun and is buzzing with new food and beverage experiences. On one side is Miss Moonshine’s and on the other, on the ground floor of a separate wedge-shaped building adjoining Mackelvie St, is the Street Food Collective, with a rotating line-up of food trucks and vendors using a purpose-built kitchen.

Definitely watch this space because there’s more to come. Stephen Marr, who owns Red Brick at 134 Ponsonby Rd, has plans for both a basement bar and rooftop cocktail bar that will further activate the laneway to Richmond Rd, which sports a bit of the old Birdcage wrought-iron gateway at its entrance. Imagine it all joined up.

Cross Richmond Rd to the elegant, rustic Ponsonby Central food chain through to Brown St. Cross Mackelvie St between the row of intricately perforated white shopfronts and a yet-to-be completed black perforated office and car-park building through to Pollen St. Then we’ll really begin to appreciate what laneways are all about. They’re intimate yet connected — places of intrigue, with maybe a hint of danger. Places that call you through while always inviting you to stop.

The lanes are not the only trans-formation created by Lot 3. The mixed-use tenancies — an array of mainly fashion retailers and offices including Icebreaker’s head office and IT company Sandfield— have breathed vibrancy into the area. From the inside, high on the Ponsonby Rd ridge, Lot 3’s funky workplaces afford terrific views across the city’s rooftops to the harbour and the Waitakere Ranges.

You’d have to say this is a building that has gone to great lengths to fit in.

The lingering question: Does Lot 3, with its bulk and height and rectilinear façade, say, in the immortal words of Dutch “starchitect” Rem Koolhaas, “Fuck context”? Look closely at the carefully modulated Ponsonby Rd façade and canopy responding to the rhythms of the street, plus the colour, texture, material and design cues taken from the Red Brick building next door, and you’d have to say this is a building that has gone to great lengths to fit in. 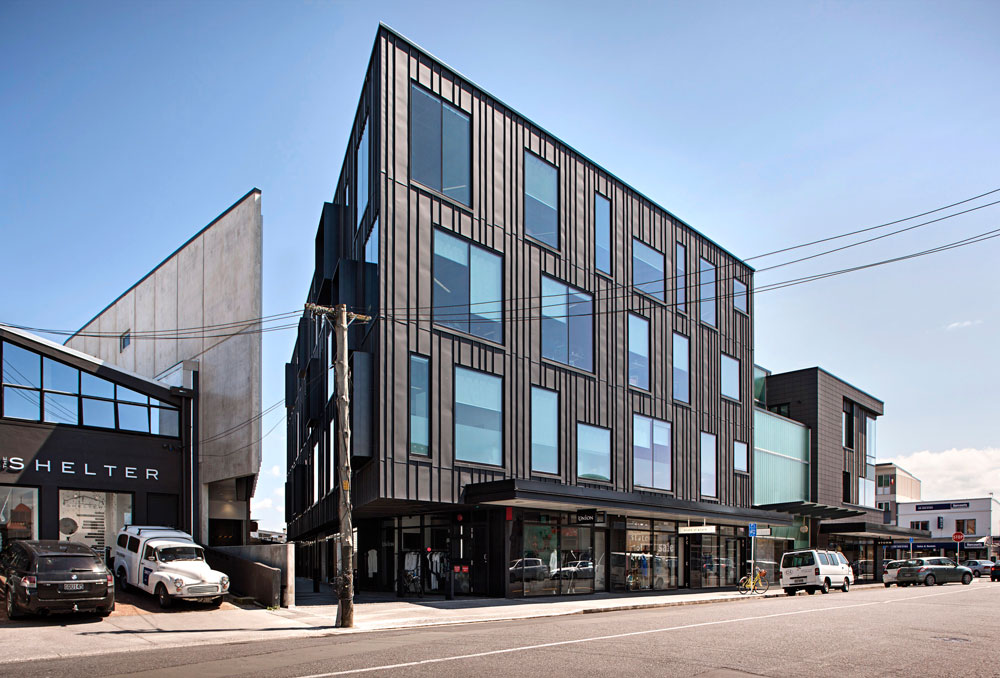 Then there’s the Mackelvie St façade — boxy, brooding black zinc and sliced in its middle by a swathe of industrial translucent glass — that speaks of factories and workshops. Here the building nods to the industry of the old city while standing for the future. Here the building as a fabric inhabited in myriad ways shows its true grit.