As an argument, isn’t it breathtakingly nuts to suggest people wanting to live in Auckland without owning a car are somehow deplorable? 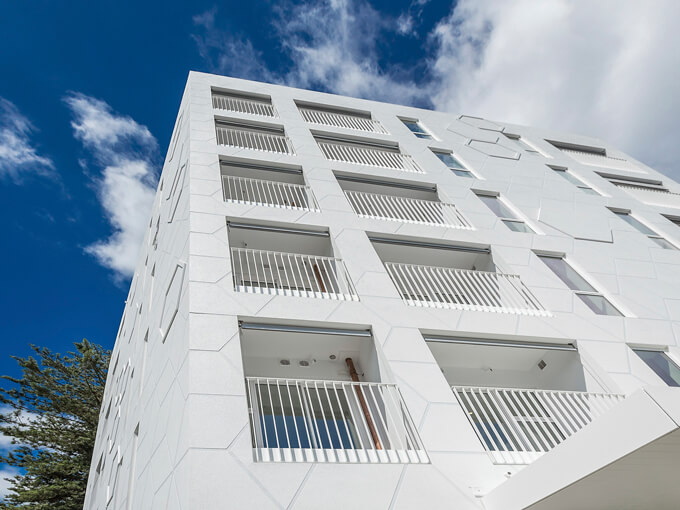 The witlessness started with the New Zealand Herald. Property editor Anne Gibson labelled the March opening of Daisy, a new apartment block in Akepiro St, Mt Eden, as part of “the whole anti-car move that is going on in Auckland”. An apartment block with no car parks — just space for bikes, scooters and two shared cars — was bound to make Auckland’s already car-ridden landscape worse.

Cars good, medium-density affordable housing without cars bad, apparently. Proof came from the owners of Fuel Conversions & Automotive Repairs, who anticipated terrible problems for their business if any Daisy residents who did own a car had the temerity to park in the street. It employs someone to arrive at 6am to move cars from its premises, where they’ve been overnight, and park them on Akepiro St so the business has space to work.

As an argument, isn’t it breathtakingly nuts to suggest people wanting to live in Auckland without owning a car are somehow deplorable?

Not to that doyen of common sense, Mike Hosking, who ranted that Daisy was clearly the result of an ideological council plot against those who do not “buy into the dogma that if only we get every car off the road, public transport and your scooter can fill the gap”. The reality, he said, is “the car is going nowhere”. Time to fight back and protest: “We want and like cars, they suit our lives and the lives we choose to live.”

Bravo, Mike. I think people like Hosking who have acquired some sort of celebrity status should, even if they are horribly wrong, speak up more on Auckland’s urban design issues. They have reach and get the debate — sorely needed in Auckland — going. Hosking’s opinion was so ridiculous that the Spinoff’s Duncan Greive responded: “What we’re seeing in this wild anguished yowl, then, is a man conscious that the world is changing, and furious about it even when it doesn’t affect him.” Auckland Council’s Ludo Campbell-Reid chimed in, too: “Car-free or ‘car-lite’ developments are a global trend and developers are responding to a basic need in Auckland for issues like lower-cost housing, where a car park can be the difference between affordability and non-affordability.”

It was the raison d’être of Daisy lost on the Herald and Hosking. When the building got under way in 2015, it was a Special Housing Area project, requiring 10 per cent of the units to be affordable, which, at that time, was calculated as $461,000. Those who bought off the plans got a bargain — the cheapest unit was $410,000. All but one of the 33 units (one and two bedrooms over six floors) are now sold at an average of $530,000, which, in a city where the median price is now $845,000, is still remarkably cheap.

How did developers Ockham Residential do it? Essentially by designing small and without car parks, which, at $40,000 to $75,000 each, are a significant extra cost. So is excess space. Daisy’s smallest one-bedroom unit is 37sqm with a 3sqm balcony and the largest two-bedroom units 56sqm, some also with tiny 800mm-wide 3sqm balconies. Swinging a cat or even a mouse in these confines won’t work. These are spaces where a minimalist lifestyle will be a huge benefit. 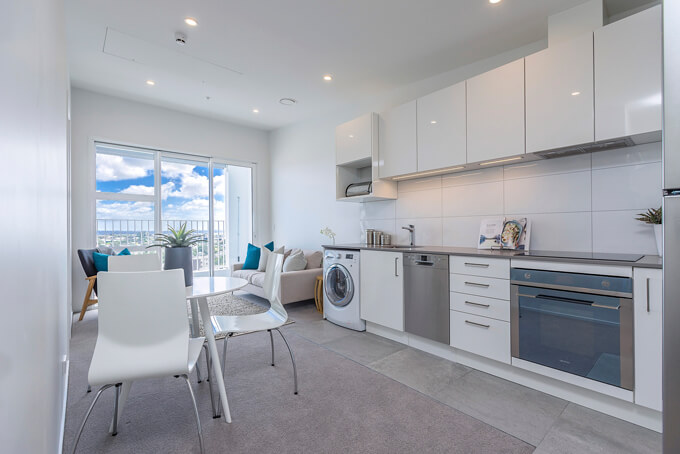 The kitchens are, however, beautifully appointed with energy-saving appliances, and thanks to the building’s other energy-efficient systems, ongoing running costs should be significantly lower.

The site, a mere 320sqm just outside the CBD, 80m from Dominion Rd’s buses and beside the railway track joining Kingsland and Mt Eden stations, provides a location that’s unashamedly gritty urban, public transport friendly and as far from blue ribbon as you can get. Yet the units do get wow-factor views across the city, especially to the north and west, and the tall Norfolk pines on the eastern side give a kind of tree-house feel.

The façade, in white and decorated with hexagons — a nod to the floret shape of the akepiro, the native shrub also known as the tree daisy — is pretty enough, but the blocky building isn’t going to turn heads.

It will garner praise for its 10 Homestar rating, a first in New Zealand and courtesy of points accrued for sustainable features such as photovoltaic panels on the roof, powering a metered, centralised hot-water system; communal gardens; rainwater harvesting; a fresh air heat exchange/recovery system; argon-filled double glazing; eco-friendly materials, plus bike and scooter parking.

Oddly, Homestar doesn’t give any points for being close to public transport, so if Daisy was in Kumeu it would still get a 10. The building also picks up points for using recycled fly ash, an unwanted by-product from burning coal at Huntly power station, in its concrete construction.

Ten is the top score, so it’s hard to imagine what Daisy might have scored if it was built in timber, as conceived in the winning design of the “Exemplary Apartment Building” competition run by the New Zealand Institute of Architects and Ockham Residential in 2014. The plan was to use cross-laminated timber wall and floor panels — 150mm-thick sandwiches of crisscrossed tightly glued timber boards — making it the tallest timber building in the country.

Unlike concrete, timber locks in carbon in the construction, and uses about 50 per cent less embodied carbon dioxide (the amount of energy required to produce and form a material). Sadly, that design wasn’t to be. Probably just as well. Imagine what kneejerk naysayers like Mike Hosking might have said. Fire! They’d be wrong again, but at least it would have started another debate.