Is It Because It's White? Why St Heliers Still Loathes 387 Tamaki Drive

The international-award-winning building in St Heliers that’s still enraging some of the locals.

He came into the courtyard at 387 Tamaki Drive brandishing a half-eaten meat pie bought from the bakery around the corner. It seemed like idle chit-chat as he asked what the photos were for.

“Oh, we’re just taking them for a website and maybe for publication in magazines and for entering in awards,” said archi­tect Ian Moore, who had popped over to Auckland from his Surry Hills home in Sydney to document his latest creation.

“Oh, that’s interesting,” said the man, waving the pie in the direction of 387 Tamaki Drive. “Do they have an award for the world’s fucking ugliest building?”

Hmm. There’d been a stream of abusive comments like this over the previous hour or so. Someone had threatened to call the police because one leg of the photographer’s tripod had slightly protruded onto the footpath, apparently blocking the public way.

They figured out later a group of villagers had rapidly mobilised. It was like an elderly St Heliers version of a flash mob. Stuff like this had been going on for some time.

The battle began in June 2003, when site owners Robin and Winifred Sheffield first applied for resource consent for a three-storey, mixed-use building in the St Heliers shopping precinct. Winifred has lived in St Heliers all her life. Her dad, who arrived there in 1925 before the waterfront road, was Scotting’s the butcher.

The council received 128 objections, nearly all of them using the same letter template. “They were signed by people I went to primary school with, by people on the hospice committee I’m involved with,” says Winifred. “It was really hurtful.”

These days, the Sheffields live in one of the upper-level apartments, loving its minimalist style and generous proportions, not to mention the view, even from the en-suite shower at the rear of the apartment. They’ve learned to live with the animosity.

On the second day of the photoshoot, Moore and his photographer were bracing themselves for another onslaught when a stranger walked up and said, “This is the best thing that’s ever happened to St Heliers. I really love this building.”

They waited for the punchline. “He just said, ‘Great job, terrific, brilliant,’ then walked off,” says Moore, whose 387 Tamaki Drive is one of the winners of the International Architecture Awards for 2014.

The story of this building — hated, loved, bitterly contested and award winning — is full of drama. Is it because it’s white? Coincidentally, the other New Zealand winner among the 112 awards selected from 36 nations, Warren and Mahoney’s artful Point Resolution Bridge, is also in Tamaki Drive and white. They make you look. They look… different. 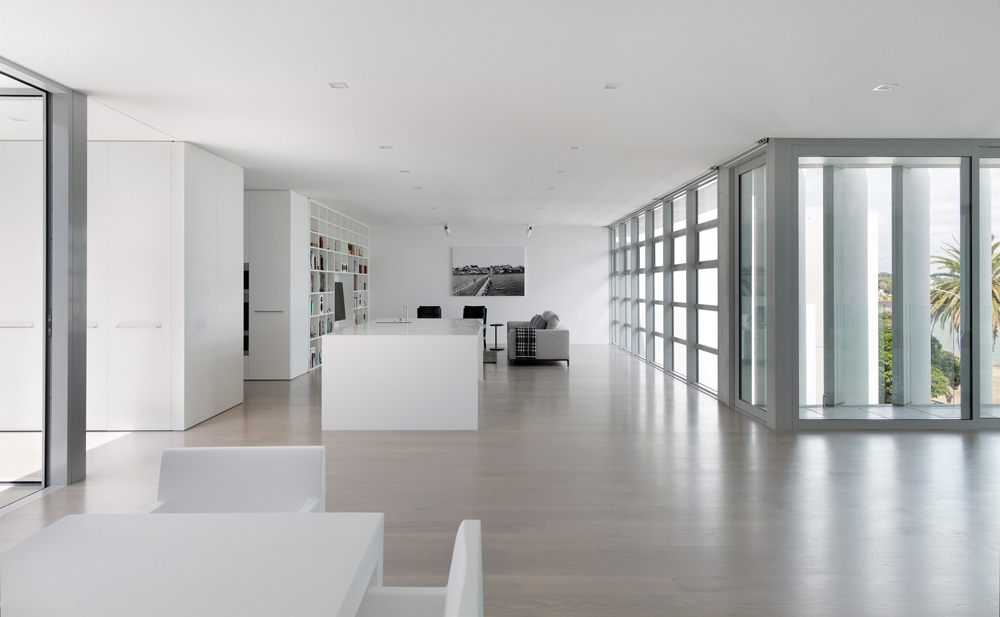 Tamaki Drive’s broad, winding waterfront path passing, sometimes slicing, a progression of bays — Judges, Hobson, Okahu, Mission, the thin Kohimarama beach and then St Heliers — is quintessential Auckland. Here, everyone can go to the beach, although at times the busy roadway makes for a rather brutal barrier to the shore. Mostly its vista of the Waitemata and Rangitoto is simply brilliant — Auckland’s much-trumpeted treasure. These days, how­ever, there’s an unsettling feel caused by the increasing density of apartment architecture lining the road. Most of the highrises, which began in the 60s and 70s, are fairly average. As they spread, you can’t help wondering if the Drive is evolving into some weird hybrid: Las Vegas meets Gold Coast.

Little wonder the villagers are re­volting. But their revolt, which was particularly vociferous during the Unitary Plan public meetings, needs to move on from nothing-at-all-in-my-back-yard to making sure the density that’s inevitable along this highly desirable beachfront strip is good.

Which is why the attack on Moore’s careful minimalist modern composition is so unfortunate. It offers public amenity — a raised, enclosed public courtyard looking out to the bay, flanked by a cafe/restaurant and bank; commercial offices on the second floor and apartments on the third level and in the block behind on Maheke St. What’s not to like? The Tamaki Drive residents should be applauding. The owners have even added a vibrant wind sculpture, Seedling, for further public enjoyment.

Perhaps it’s the modernist aesthetic and the whiteness — the concrete is made from white sand and white cement — that jars.

Moore, born in Warkworth, got his taste for modernism watching his father building spec, Californian-inspired “ranch houses with ranch-sliders” on a block of land at the back of Mairangi Bay. And from his mother, who did the interiors and was very influenced by all things Japan, such as shoji screens.

“We always lived close to the beach,” he says, “so it just seemed right to throw these big sliding doors open and have a big deck facing the view.”

His career tracks from lightweight New Zealand timber construction to lightweight steel frame to his current exposed-concrete phase. The Tamaki Drive building is made entirely of precast concrete panels and hollow-core floor panels; the balconies and internal courtyards are paved with precast concrete slabs. Vertical glass-reinforced concrete blades (white, of course) are cleverly angled either side of the internal court­yard, giving privacy for the adjacent apartments while maintaining sea views.

“My buildings are actually getting heavier and heavier,” says Moore. “Tamaki Drive is probably my heaviest building in terms of its visual language.”

He says he’s trying to get back to some­thing timeless. Yes, it’s very much about the modern movement and functionality, but the essence, he says, is taking away superfluous elements and finishes — “getting back to that real quality of materials and construction and making things last”. As he puts it, he makes “a very lean, mean, efficient building”.

Perhaps one day the villagers will see the stark, arresting, new-Auckland beauty of it as well.