This article was first published in the December 2015 issue of Metro.

The glass panels of the airlock doors glide aside. Step in. Doors whisper shut. Trapped in a glass cage. Opposite, a pair of glass sliders automatically part. Muzak fills the air. Crossover to retail therapy dimension complete.

This is the hermetically sealed world of the shopping mall, in this case $160 million worth of it. NorthWest is located at the junction of the Northwestern and Upper Harbour motorways. In the middle of nowhere.

This greenfield construct is part of a 56ha development known as the Westgate Town Centre. By New Zealand standards, NorthWest, owned and developed by Stride Property (formerly DNZ Property Fund), is big — 2.7ha, 100 stores, 8000sqm of Farmers and 4500sqm of Countdown. Why is it here?

Apparently this is an area of burgeoning population and growth. The immediate “catchment” is about 180,000 people, which includes some 65,000 locals. The big potential, says the developer, comes from the fact that 475,000 people live within a 15-minute drive.

It seems shopping, even in old-fashioned malls, does make the world go round.

The front entrance to the mall at newly created Maki St — which itself opens on to a large, newly formed and as yet mostly barren town square — is clunky.

After the airlock, visitors negotiate the undersides of two escalators before entering the mall. Of course, most enter from the other side, where the carparks are and where there are no escalators in the way. Back to front. Front to back. In mall world, the car dictates the way in.

Could this entrance be a Gruen transfer? That’s the moment when, on entering a shopping mall, consumers are confronted with an intentionally confusing layout and artificial ambience. They lose track of their original intentions. The effect is named after Austrian architect Victor Gruen, credited with the invention of the enclosed shopping mall in the early 1950s, but who vehemently disavowed such manipulative techniques. 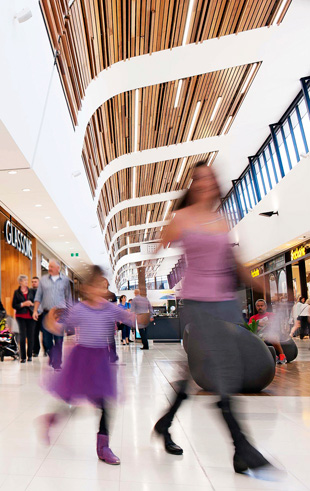 The idea is that the hapless consumer, disoriented and at the same time lulled by the climate-controlled, Muzak-filled environment, will wander around zombie-like, primed to buy.

In truth, there’s nothing confusing about NorthWest. If anything, its single level street-like layout is boring and predictable. Turn left or right; Countdown at one end, Farmers at the other, shops either side, foodhall.

The architectural flourish is the day-lighting of the interior pedestrian street with clerestory windows on one side and a sloping timber slatted ceiling on the other. The height of the space, coupled with the downpour of daylight and the curve, creates a pleasant airiness. There’s a dash of greenery, too — rather ungainly floor-to-ceiling creeper columns, the greenery entwined with a cylinder mesh of reinforcing steel.

That’s it. No pizzazz, dancing water feature or even kitschy sculpture. No entertainment drawcard. As malls go, this is, like most in New Zealand, very Presbyterian. You don’t expect the excesses of the Dubai Mall with its ice rink, aquarium and underwater zoo, but surely we can do better than this?

There are a couple of oddities at NorthWest, the most striking being the lack of a second level of shops, a hallmark of inward-facing mall design. The upper level is mostly outside — a vast carpark on the roof. Strangely, the two times I visit, including a Saturday, it’s vastly empty — shoppers ignoring the drive-up ramps in favour of the ground-level carparks at the back.

Then there are the signs dotted around the floor: “More shops outside.” Blasphemy — malls have always been internal environments designed to meet your every need. Ironically, the idea for such enclosed consumer cathedrals came out of the Cold War.

Gruen’s 1956 Southdale mall in suburban Minneapolis was deliberately located outside the city’s blast zone and solidly designed to double as a post-apocalyptic structure, complete with a 36,000-kilowatt generator. Beneath the shoppers’ paradise was a large basement with an underground tunnel system, built to act as a fallout shelter.

NorthWest, which does feel a little bunker-like, breaks the rules of the introverted mall by having shops around its perimeter, mostly on the Maki St side.

Shops on the inside, shops on the outside. What’s odd about the arrangement is that there’s no, or very little, connection between the internal and external shops.

This is strange because NorthWest is referred to as an “integrated development” adjoining the $27 million Te Pumanawa Square complex — the centrepiece of the Westgate Town Centre, which will eventually include a community hub. The developers have missed an opportunity to integrate different shopping experiences and create something special.

The nascent Westgate Town Centre — a $1 billion public-private partnership between New Zealand Retail Property Group and Auckland Council dreamed up in 2002 — is a bit confusing too. So much so that in February, Auditor-General Lyn Provost launched an inquiry largely relating to how the line between the public and private benefits of the project has been managed. In the council’s eyes Westgate is an amazing “North West transformation” that will create new homes, new jobs and much more.

Really? This empty landscape at the city’s fringe with no decent public transport speaks of fragmentation, isolation and extreme suburban sprawl, the opposite of the Unitary Plan’s vision for a more compact city.

But what’s really weird about NorthWest is that in Auckland, malls are enjoying a sort of renaissance while elsewhere, especially in North America, they are dying. A $200 million expansion is planned for Sylvia Park, there is a mega-mall concept for Takapuna’s Shore City, LynnMall has just undergone a $36 million expansion and a makeover is planned for Milford Centre.

Shopping is everything. The mall rules the city. Aucklanders clearly love shopping this way. Why does it have to be so dreary?