Auckland Debates: Should We Keep the Pohutukawa Six?

Auckland Transport (AT) plans to cut down six mature pohutukawa opposite Motat on Great North Rd. Should that happen? We asked AT to explain its reasons, and opponents to put their case.

The founding premise of the Auckland super city was that the city’s congestion was costing $1 billion a year in lost productivity and this had to change.

To address this drain on the Auckland and New Zealand economies, one council was created to provide a single direction and strategy, concentrate effort and apply economies of scale to the management of all of Auckland.

Auckland Transport (AT) was created to solve the congestion problem and the New Zealand Transport Agency (NZTA) was tasked to work with AT. Between us, we have to produce the one network without which nothing will be solved. Urban roads and state highways working together to keep the traffic flowing and fast, efficient road, rail and ferry passenger services that — together with walking and cycling — entice Aucklanders out of their cars.

Both AT and NZTA spend public money and it is our legal and moral responsibility to deliver the most objective cost-efficient solutions to the ratepayers and taxpayers that planning and engineering can devise, for the least possible cost.

That is the context for the pohutukawa controversy.

We need buses to flow freely westbound on Great North Rd. But, increasingly, traffic waiting to turn left into St Lukes Rd at peak times is stacking up along Great North Rd and holding up the buses. This will be made worse with growth and when the new Waterview Connection is opened, delivering more vehicles to this section of the roading network.

The only solution is to stack turning traffic in a new left-turn lane, out of the way of west-bound buses. Alongside this will be a cycle lane connecting to the Northwestern Cycleway. To build that left-turn lane, however, means we have to remove six of around 60 pohutukawa. They will be replaced with nine semi-mature trees.

We have examined all the options and this is the only one that is both feasible and cost-efficient. We can’t stack as many cars if we put the lane south of the trees and, even if we could, the trees could die because we’d impact their roots and drip line.

We could move the whole road closer to Motat but it would be equally controversial and cost an estimated $7 million for land acquisition and reinstatement, compared with $600,000 compensation for the trees.

Given that NZTA is upgrading the motorway and interchange, it is the most cost-effective solution for Auckland Transport to improve this intersection now to realise the full benefits of NZTA’s upgrade and investment programme.

As the road-controlling authority, Auckland Transport has an obligation to construct roads and intersections which are safe to operate for all users. Some opponents to our removing the trees have suggested reducing the lane width to save the trees. Our professional engineers advise that this will create increased safety risks for the users of the road corridor. Clearly we are not prepared to compromise safety when we complete these construction projects.

The independent commissioners have found in our favour, so we will continue through the normal process.

Greg Edmonds is the chief development officer of Auckland Transport. 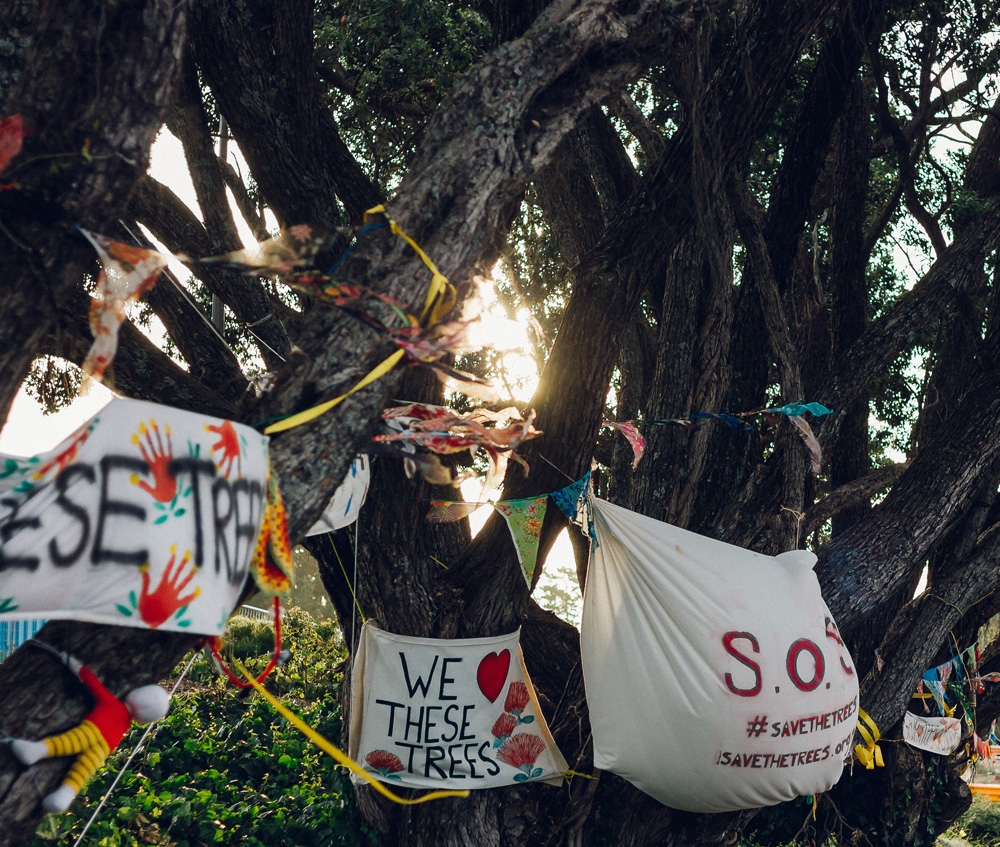 The Pohutukawa 6: a stand of massive, mature trees at Western Springs that Auckland Transport wants to cut down. Why? To make way for an extra turning lane approximately seven car-lengths long, onto the newly widened St Lukes Rd bridge.

Why have these trees struck such a chord? The city is full of pohutukawa; after all, they’re the official symbol of Auckland. Well, it’s partly that these ones are big, beautiful and old. They’re heritage specimens on public open space in our collective back yard.

They date from the massive Depression-era public works project that created Chamberlain Park in Mt Albert: the avenue of pohutukawa along Great North Rd was the finishing touch on this gift to the city. There’s added irony in their location — opposite Motat, that repository of old and precious things.

It’s seems such a ridiculously old-fashioned thing, to cut down a row of handsome trees flanking a busy road (adjacent to an eight-lane motorway, itself carved out of park space). Especially when these ones were planted 80 years ago by forward-thinking civic leaders — including the then-mayor, George Hutchison, and his superintendent of parks, Tom Aldridge — who created verdant vistas they did not expect to enjoy in their lifetimes.

They could not have foreseen the Waterview Connection and its backwash onto local roads. But they would surely be aghast that some of their civic successors are so determined to destroy part of their bequest to the future.

Not only are the trees historic and beautiful, they clean the air. Given there will be at least 16 lanes of tarmac running beside them, isn’t that reason enough to keep them?

Auckland Transport has offered a string of justifications for the trees’ demise, none of which stack up. It has claimed that the trees will “make way for cycle lanes” and improved bus lanes, but its “preferred option” features only intermittent bus lanes and puts bikes on the footpath with pedestrians, so that looks like a lie. The council itself, especially the parks department and the Waitemata Local Board, has staunchly opposed the trees’ removal, but has been bulldozed by AT at every step of the way.

Citizens have found the process of objecting to AT’s plan Kafkaesque. At a hearing in November, most of those opposed to felling had their submissions disallowed because they had been given the wrong reference number.

A “community liaison” meeting in January degenerated into farce. AT’s representative claimed it had fully considered all possible options, but a few questions from the floor revealed this was not true. Then AT gave the impression Motat had doomed the trees by favouring parking spaces, which was again not true.  On top of that, one of the options AT drew up (Option 6A) provides all the vehicle lanes it says it needs, and keeps the trees. But now it says that won’t work, without explaining why.

As one observer recently put it, we keep destroying inner-city heritage and amenities so that people who live miles away can get home a bit faster. AT claims that only by removing these trees can it manage projected delays in a worst-case peak-hour scenario a decade from now. But its figures are based on outdated projections and take no account of changing commuter habits and improvements to public transport, including its own recently announced light rail plan.

When former New York Transportation Commissioner Janette Sadik-Khan visited Auckland last year, the chair of the AT board, Lester Levy, made bold statements about recasting AT’s “statements of intent” as “statements of imagination”. When is that going to start?

Jolisa Gracewood and Mark Graham are from Pohutukawa Savers, a group of concerned community members.

MORE ON THE TREES

“This same council, just eight years ago, fined a property developer a total of $100,000 (plus costs) for destroying a protected century-old pohutukawa in Royal Oak that was cherished by the community.” Jolisa Gracewood on why the trees should be saved – despite the council’s arcane submission process.

The timeline for the trees

February 20: Deadline for AT to accept or reject the recommendation of independent commissioners to cut down the trees. If AT accepts, submitters have 15 working days to appeal to the Environment Court.

Easter 2015: AT plans to close the intersection to begin work already permitted, which currently includes raising the road and heavily pruning the trees.