Best of Wellington: SO FRESH, SO CLEAN

New openings in the capital city.

August Eatery
Lisa Lee and Tanase Antipas’ new cafe August Eatery opened up a couple weeks before August 2021’s Level 4 lockdown. With a beautiful (and dramatic) pitched roof creating an unmissable silhouette from the outside, the inside is decked out in a deep purpley-red, with hanging orbs of yellow light and pastel pink chairs that add a sense of playfulness to the space. The menu is broadly Mediterranean, with brunch dishes like tsoureki french toast, which is named for a sweet holiday bread flavoured with orange zest; Istanbul eggs; and a liberal use of za’atar. Yum.
75 Taranaki St, Te Aro

Fred’s
Wellingtonians seem to like their sandwiches like Aucklanders like dumplings, huh? A new dedicated sando spot on Cuba St, Fred’s demands some deserved attention from passers-by, with its palette of bright orange, pinks and cool- toned greys. Open from 8am–3pm everyday, it keeps things pretty simple: seven sandwiches (two vegan options), using bread from both Wellington Sourdough and Shelly Bay. Keen as for the tuna melt, which is slathered together with chives, pickles, lemon, mayo and cheese.
149 Cuba St, Te Aro

Koji
Koji, which is a mold that is responsible for so many fermented staples in Japanese cuisine, like miso and soy sauce, is now also a modern Asian restaurant on Majoribanks St by chef Johnon MacDonald. If you’re familiar with Asian cuisine, you’ll see inspiration taken from all over the continent, with a particular focus on Japan: think sashimi, miso dengaku eggplant, udon noodles. Some surprising renditions, like pie tee with venison, star anise and kaffir lime, a Nyonya-Malaysian dish that traditionally has none of those ingredients, keep things interesting.
12 Majoribanks St, Mount Victoria

Kuikui Lane
Named for the kuia (nanas) in our lives, Kuikui Lane is a bar that shows manaakitanga (hospitality) to everyone who walks through its doors — just like at your nan’s. Kai (food) mostly leans nostalgic, with plenty of parāoa (bread), meat and cheese boards, and mince savouries served with Wattie’s tomato sauce. Snack on them while drinking — Kuikui specialises in gin and features it all across its cocktails. Our picks would be the Basil Roots (Roots gin with basil, mānuka honey, elderflower vermouth) or, for something fun, a Hokeytini (Kuikui hokey pokey vodka, apple, lemon).
120 Victoria St, Te Aro

Liberty
A new venture from the owners of Wellington institution Logan Brown (though more relaxed, like its dressed-down little sibling), Liberty is described as a place which “defies categorisation”, with unfussy dishes full of intrigue. Divided up into the now-usual menu tiers of bites, small and large, there are, indeed, many things that demand to be immediately ordered just to see what will land on your table, such as agria and wild boar chorizo “bomba”, or the Korean fried chicken served with salted smashed cucumber.
227 Cuba St, Te Aro

Little Grump
Little Grump is a little pastry shop right on the corner of Featherston and Johnston Sts, its ceiling-to-floor windows giving it the welcoming appearance of a bright, open box. The pastries are definitely what you come for, with golden-brown croissants, cinnamon buns the size of your head, and small-cookie-sized pick-me-ups. They’re also a good place to stop in for lunch on-the-go, plus a Coffee Supreme flat white to takeaway.
142 Featherston St, Wellington Central 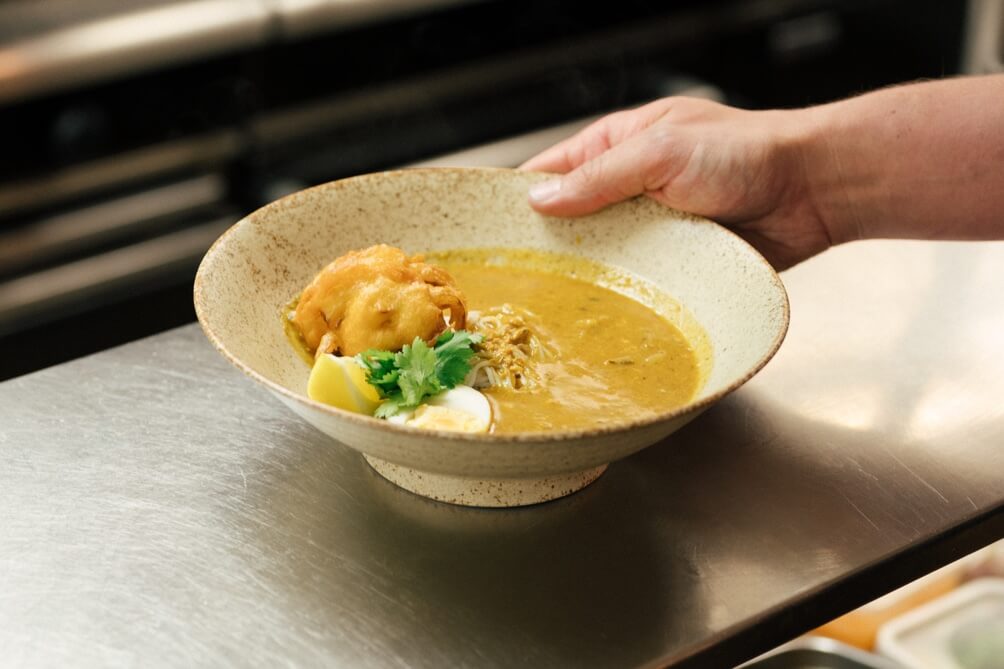 Mabel’s
In 1978, Marlar Boon’s phwa phwa (grandmother) Mabel opened a Burmese restaurant, Monsoon, in the heart of Wellington. Mabel arrived in New Zealand in 1976 as a single mother of four children — at the time, Asian restaurants were few and far between. When Monsoon opened, it was the first of its kind in Aotearoa. Through the years afterwards, Mabel fed, served and looked after a growing community that remembers her legacy today. “It’s been so warming to meet so many people coming through the restaurant who remember her, and her food,” Boon says.

Boon’s new restaurant, fittingly named Mabel’s, is both a continuation of her phwa phwa’s legacy and something new altogether: a modern tribute that acts as an introduction, Boon says, to her food, culture and family. “It’s been humbling to see our guests not only enthusiastic about the food, but grabbing their phones and googling where Myanmar is,” Boon tells us. “People leaving Mabel’s more aware of Myanmar and its people is important to me.”

Boon has a background in visual arts and retail; her husband Ian and their friend Dan also co- own Crumpet, a cocktail bar in Wellington. There is a keen attention to detail at Mabel’s that reflects Boon’s desire to treat diners to an experience rich in food but also in story — you can see it in the thoughtful use of textiles, colour and craft which come together to create a space people can engage in. With the team at Best Wishes Studio, they created a curtain made from longyi, a men’s sarong. “My uncle passed away last year and he was the biggest advocate for opening the place. I was so moved when Marta [from Best Wishes] brought over the completed curtain; I was overcome with the feeling of my uncle’s presence.” Alongside this, the team worked with Abandoned Brewery to create a rice lager reminiscent of those drunk in Myanmar; the walls have been adorned with weavings which highlight the intricacy of Myanmar’s craftsmanship; and Burmese lacquered pieces, which are tied into cultural rituals of offering, are used in the space. Even the colours — all terracotta, clay pots, teak woods, yellow and jungle greens — were chosen purposefully to evoke a sense of home.

As for the food, although there’s similarities with other Southeast Asian and South Asian cuisines, Boon encourages diners to try it with no expectations or comparisons. For the general flavour palette, think turmeric, ginger, chilli, fish sauce and citrus, plus plenty of texture and crunch. “My favourite salad is a la phet thoke, which is a pickled leaf tea salad. The tea leaves are from Pindaya, in the Shan state of Myanmar. They are picked young, and then buried underground for three months. We most commonly eat it as a salad, but it can be found in curries as well and mixed into rice.” Boon also mentions a special style of tofu, tohu, which they make in house from besan flour, made from a type of ground chickpea. “It’s nutty, custardy and absolutely delicious.” But her favourite? “Mohinga. It’s a fish rice noodle soup that has a lemongrass, fishy broth taste to it. We serve it with an onion fritter that I love to break apart with the back of my spoon.”

It’s clear that Mabel’s is thoroughly infused with genuine hospitality and a deliberate intention that vibrates through Boon’s words. “I believe we need more places in Aotearoa that celebrate our diversity. These places help people understand their community, but also give minority groups expression and pride.” Mabel’s influence, too, can’t be understated. She passed away when Boon was 13 years old, and her loss was challenging for Boon; she says it’s been hugely rewarding to circle back and revisit her again at this point in Boon’s life. “I’m very lucky to have had her as my grandmother. She was and always will be one of my greatest loves.”
66 Tory St, Te Aro

The Oatery
Now with a physical space, you can shop for the week’s brekkie at The Oatery’s new spot in Left Bank, which sells yum (and nutritious) oats and things to mix in with your oats (like compote) for your morning porridge. You can also take it slow and order a bowl to have there, if you like. The cafe does a few different types of toast if you want something different when you dine-in, using slices from Wellington Sourdough, like a simple slice of its fruit toast with burnt honey butter and cinnamon.
8 Left Bank, Te Aro