Matarau are multi-pronged eeling spears. Traditionally the points of the spears were made from hardwood, especially māpara and sometimes even whalebone. Like the end of the spear, matarau also means “hundred-pointed, multi- pointed, having many points” and additionally, is the title and metaphor underpinning a forthcoming exhibition at City Gallery Wellington Te Whare Toi.

But Matarau is not a fishing show artist and in this instance guest curator Shannon Te Ao (Ngāti Tūwharetoa, Ngāti Wairangi, Te Pāpaka-a-Māui) is quick to tell me. Te Ao, a name I’m sure you will recognise, is a Walters Prize-winning artist with recent exhibitions at Remai Modern, Saskatoon; Oakville Galleries, Toronto; and The Dowse, Lower Hutt.

Matarau includes all-new work by an intergenerational tranche of artists including Robyn Kahukiwa, Hemi Macgregor, James Tapsell- Kururangi, Ming Ranginui, Emily Karaka and Kei Te Pai Press. For all of these artists, according to
Te Ao, “life is their subject matter”, although not necessarily in an autobiographical sense; rather, “whose practice is connected to their experience”.

Matarau responds to Te Ao’s feelings and thinking from the start of the pandemic where the relationship between things that were previously held at a distance seemed closer than before. Meaning that a conversation which starts with the New Zealand election, naturally turns to anti-Trump movements, then turns again to Black Lives Matter all very quickly. Or to put it another way, as Emily Karaka did in conversation with Te Ao, “everything is connected”. It was in this context that social discourses felt like they were in closer proximity to each other. “This context” being the new experience of living through Covid, the pandemic being a fundamentally different age according to Te Ao. For Te Ao then, Matarau or the eeling spear is a metaphor for locating yourself while being nimble and flexible, about “calibrating who you are, what you’re trying to do and shifting conditions around you”.

When Te Ao started conversations with artists over 18 months ago, he found that they were having parallel thoughts. For the show, then, Te Ao wanted to work with artists whose practices conflate ideas where the threads of which can’t be extracted easily.

It’s not usual for Te Ao to be on the curator end of the artist–curator relationship; when I ask how it’s going he tells me, “I realised how lucky I am.” Not often getting to help other artists progress their work, he loves being in conversation with them. Being an artist is a benefit to Te Ao, who says that people have lower expectations of his curatorial work with him not strictly being a curator. Rather, he’s an art uncle: “Happy to fly the flag for the exhibition and ensure it’s active for the duration and that people keep coming back.”

Matarau is City Gallery’s first exhibition after the Hilma af Klint blockbuster (no pressure). It will be accompanied by a screening programme in collaboration with Mark Williams of CIRCUIT, and a full public programme soon to be announced. Te Ao hopes that the city of Pōneke will get behind it. When I ask Te Ao what to expect, he says Matarau will be “visually generous, accessible, funny and vibrant”. I don’t know that Matarau will answer questions, but it surely will start conversation. 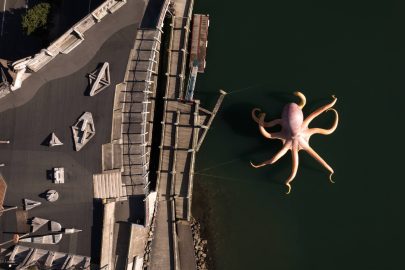