All Aboard the Albert St Railway

You always know there’s a problem when someone says, “We could never do that in our city.”

Deputy mayor Penny Hulse wants to paint some lines on Albert St. And put up some signs. Why? Because she wants to show people where the City Rail Link will go. Railway lines, geddit?

Do that, she argues, and the abstract economic burden of our proposed underground railway will become a really-happening-now project, a talking point, a springboard for the imagination. A mechanism for us to start thinking seriously about what the downtown city might become when tens of thousands of workers and shoppers and students spill every day out of a subway station underneath the intersection of Albert and Victoria streets.

It’s a brilliant idea. Cheap and powerful. They could build on it, too. As the work starts — next year is likely, and it will be disruptive cut-and-cover, not a tunnel — how about they turn it into an “imagine Auckland” project? Use the walls they will put up to keep us out as a giant, ongoing canvas on which people can post their ideas for the city — in words, in pictures, hell, in 3-D installations. Aucklander Stuart Houghton has been posting his “100 ideas for a better Auckland”, a set of beautifully whimsical illustrations, at 100daysproject.co.nz (one of them is shown above), and they’re a terrific provocation. Put some of them up and invite everyone to contribute more.

Penny Hulse wants to lay down the painted tracks because she wants to generate more public engagement with the changing city. She wants us to feel part of what the council is up to. But guess what? She says she can’t get people at council to support her idea. Why not?

Sometimes, it’s hard not to feel just a little glum.

Curiously, though, despite this aversion to what would admittedly be a slightly anarchic process of public participation, the council is not sitting on its hands. All sorts of changes are under way — and they’re not all as transparent as they might be.

The City Rail Link is being driven by a new council outfit, with more than 100 people, mostly drawn from other parts of the council, already working for it. That hasn’t been announced.

There are new plans to redevelop the whole downtown transport hub area. A new terminal is proposed for buses from the north and west, at the bottom of Albert St; another for buses from the east and south will be sited east of the Britomart railway station. This is a massive proposal, but there’s been little public engagement.

And because the ferry basin needs structural repair, the logistics of ferries, cruise ships and container ships are back under review — along with the future of Quay St, Queen Elizabeth Square and the finger wharves. It’d be pretty cool if you could wander down to Queens Wharf and study the billboard displays of what might happen in all of this, wouldn’t it?

Except, as with Penny Hulse’s painted railway, there are no billboards. Why is that? Come on, all you planning guys. Talk to us, eh?

In the biggest organisational change since the creation of the supercity in 2010, the council plans to merge Waterfront Auckland with Auckland Council Properties to form the Auckland Development Agency (ADA). It will be a new council-controlled organisation: a super CCO.

There’s some good logic to this. Waterfront Auckland has been a success, not just in transforming parts of the waterfront, but in attracting major private-sector investment to the Wynyard Quarter, and the council says it wants to apply that skill and experience to other parts of the city. Suburban centres like Mt Albert are heaving with life but suffer badly from urban planning neglect. Others, like Avondale, need to be brought back to life. And in the city’s sprawling southeast you’d be a fool to argue that enlightened urban planning has the upper hand.

The logic, however, comes up short when you try to factor in the principal reason the southeast is such a mess. Not surprisingly, it’s also the main reason the Mt Albert shopping centre is such an unappealing place to visit, despite the potential of those wonderful shops to form the heart of a really stimulating  town centre. It’s the traffic.

Auckland Transport (AT) will not be part of the new ADA, and no changes are proposed for the way the NZ Transport Agency in Wellington dictates so much of the transport planning in the city. This is disappointing. Urban planning is intrinsically linked to transport. If the culture of Waterfront Auckland will be good for Auckland as a whole, there is no part of the city’s officialdom in which that is more true than AT.

It’s clear AT believes we will always be a car-focused city; and clear also it believes this means we have to  keep building roads.

Canadian planner Brent Toderian has been in Auckland recently, working with council organisations. He says you always know there’s a problem when someone says, “We could never do that in our city.” Amsterdam and Copenhagen, he points out, became cycling cities only in very recent decades. The big challenge for ADA will be to infect the “nothing will change” culture of AT.

Meanwhile, the Auckland Arts Festival is gearing up for March. My question: could the council and the festival, please, come up with a plan to make downtown Auckland a true festival city? Disrupt everything in the name of festive entertainment — and good street eating, of course. Help us love being Aucklanders, right in the middle of the city, and then see what opportunities for the future that unlocks. 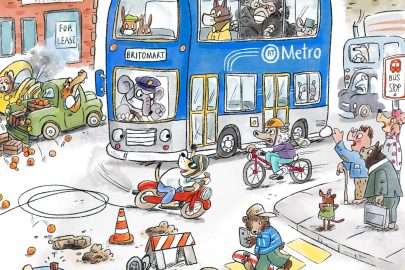