Why Auckland apartment living is increasing in popularity

As the cost of stand-alone Auckland houses has rocketed out of the reach of many buyers, attention has turned to apartments.

Auckland’s apartment market is lively. Two years ago, 70 apartment projects containing 4700 units were being sold off plans, or had building consents, or were under construction. This year, numbers have swelled to 120, with 8600 units. Low-rise walk-up apartments (vertically attached) and also terraced housing (horizontally attached) are appearing — both styles usually costing less than traditional apartment blocks, which if four storeys or more by law require pretty-penny elevators and sprinkler systems, for instance. The proliferation is a sign of our maturity, says Ludo Campbell-Reid, the general manager of Auckland Council’s design office: “New Zealand is a young country and Auckland was a bit like a juvenile delinquent, unsure of its personality.”

Apartments provide adult options, Campbell-Reid says. Baby boomers, for example, “can spend their lives mowing their lawns, trimming their hedge and creating topiary [he’s from England], or they can live in the centre of the city, where they can walk to the opera, to the philharmonic orchestra, to the waterfront, to shops”.

Auckland needs quality four- to five-storey apartment blocks to fill “the missing middle”, he adds — the transitional area, that is, between the quarter-acre sections and the multistorey apartment blocks in the central business district. With the Unitary Plan now operative, such median-density housing is permissible. Many Kiwis, says Campbell-Reid, are aware of the virtues of apartment living having travelled to Sydney, Melbourne and beyond, where such housing is de rigueur and often associated with vibrancy, diversity and affordability. 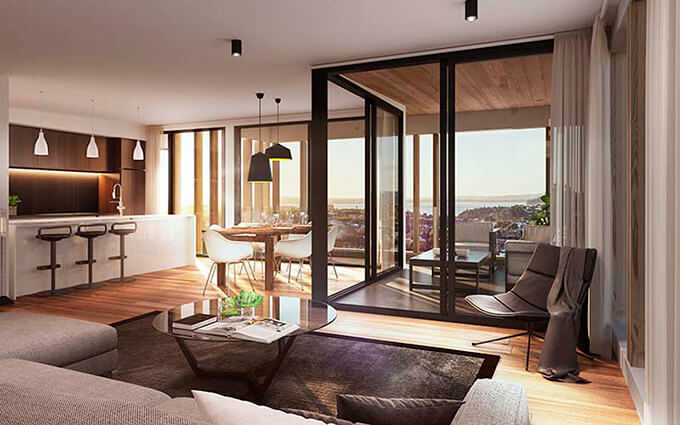 Location is key when it comes to quality apartment living.

“As our population ages, as the baby boomers come to the end of their working lives, they’re looking for an alternative lifestyle,” says Matt Baird, Barfoot & Thompson projects manager.

Baird has been in the real estate business since the late 90s and back then, apartments were generally seen as less desirable, and a tougher sell. But times have changed, he says. “Now, New Zealanders understand the benefits of apartment living and they actually understand there is a real difference in the quality between various buildings.”

Location is currently a top priority for buyers in Auckland’s apartment market. “The apartments in the less- desirable areas have been struggling to sell,” he says. “While we’d love to see more apartments being built in the less-desirable locations, because we want a whole spectrum of buyers, the cost of construction has been so prohibitive that we can’t build smaller apartments in those B- and C-grade locations.”

Instead, it’s the premium end of the market that’s on the rise. “The popular buildings are the high-end apartments in really A-grade locations,” says Baird. “Buyers are prepared to pay top dollar if the apartment is located in the right area and it’s the right quality of design.”

The good news? Those high-quality apartments will keep on coming. “There are more and more good buildings that will be completed in the next 12 to 24 months,” says Baird. “Auckland will start to see a lot more high-end apartments and those buildings will become very desirable.”

If you are looking to buy into the market, Baird’s tip is “research, research and more research”, delving into who the development company is, who is building the complex and what their track record is. “There’s a big variance in the quality of developers in Auckland,” he says.

So, while the market’s not quite geared towards first-home buyers just yet, for the 60-plus age bracket wanting a low-maintenance life, it’s booming. 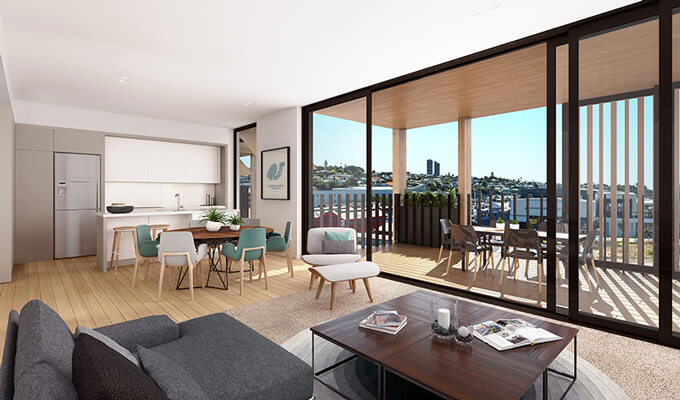 Sandra Forrester, Barfoot & Thompson’s city branch manager, moved from a suburban house to a city-fringe apartment 18 months ago. She and her family haven’t looked back.

We bought our Freemans Bay apartment off the plans in 2014, when we were living in a big house in Mt Albert with five bedrooms, three bathrooms and a pool. We were drawn to the apartment’s great location, the city and harbour views, and the easy walk to the CBD. It was also an owner-occupier-type property, which at the time were not easy to get in the city.

There’s a perception that apartments are small and before we moved in December 2015, we did wonder how we would fit into a two-bedroom, 100sq m apartment. But we also have a massive 50sq m deck, so the outdoor living area becomes an extended part of the property. Two of our three children have left home so we’ve got a pull-down bed in the office space for when they come to stay.

For us, apartment living became extremely easy very quickly. Our lifestyle has changed dramatically. Weekends used to be spent cleaning and in the garden — now it’s half an hour to clean, and no garden maintenance.

We walk everywhere — I walk to work, our daughter walks to university, we walk to Ponsonby for dinner, so it costs us next to nothing for petrol. We were running three cars before but now we’re really only using one.

The dog came with us and she is much more placid. Before, she was constantly on guard protecting the house. Now, I walk her twice a day at the dog park across the road and the rest of the time she chills out.

We’re in our 50s and at the time we moved, a lot of our friends said we were crazy to downsize. But a few of them are thinking about doing the same now the kids have left home.

It’s important to do your research before buying an apartment. The body corporate, the developer’s track record, and so on — those sorts of things do matter. We did that and we’ve no regrets. 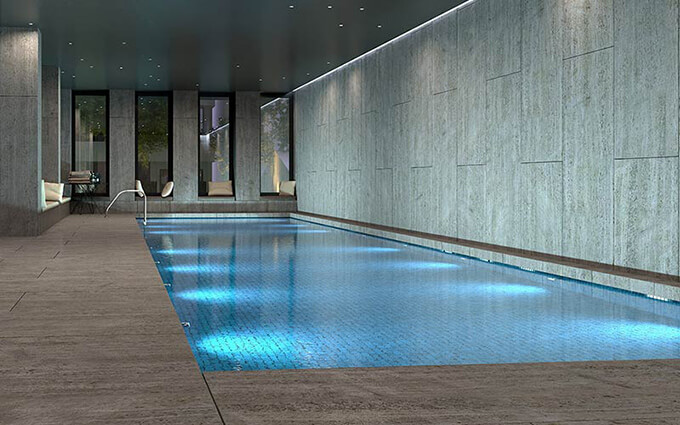 An apartment complex that puts people-centred urban design front and centre is among innovations driving the rejuvenation of Wynyard Quarter.

The 30 Madden complex, developed by Willis Bond and Co, features 91 leasehold apartments designed by Studio Pacific Architecture. The latest release of 30 Madden apartments through Barfoot & Thompson are available on a 128-year term with no ground rent payable for the length of the lease.

Overseen by Auckland Council’s urban development agency, Panuku Development, 30 Madden not only meets the rigorous urban design standards set down for the area, it’s one of the first 7-Greenstar-rated residential buildings in Auckland.

The complex adds to Wynyard Quarter’s newly vibrant atmosphere, along with the ASB Waterfront Theatre, the six-star Park Hyatt hotel now under construction, and openings of new bars and eateries.

Matt Baird, projects manager at Barfoot & Thompson, says the combination of prime location and spacious living is proving to be a major drawcard. “The location is key for us, with the rejuvenation of that area. Being close to the water, on the western side of the city near Ponsonby, Freemans Bay and the CBD… the location is very appealing for buyers,” he says. “And the apartments themselves are generous in size.”

So who’s buying them? Baby boomers are selling up in the suburbs in favour of quality living in a vibrant city environment. The options at 30 Madden range from studios to one-, two- and three-bedroom apartments or penthouse suites, starting at $625,000 and going up to $5 million-plus.

The complex is positioned at the top of the market, and with the high-end prices comes high-end living, says Baird. “They’re very elegant. If people are coming from a big home, they don’t want to compromise on quality. All the attention to detail in terms of the fittings, the specifications, the whiteware is all high end.

“With the America’s Cup and the buzz throughout the area, it’s our number-one destination in Auckland, for sure.”

For the full story, pick up the Sept-Oct issue of Metro, on-sale now.