My Life in Clothes — Sam Brooks

Writer, playwright, and printed fabric enthusiast SAM BROOKS doesn’t go outside without a kimono for six months of the year.

This print shirt has a photo of my friend Chelsea McEwan Millar, who is an actress, on it. It’s a photo that was taken by my friend and documentarian Tegan Good during a play we did in 2014 called The Girl and the Gay. It is such a ludicrously unflattering photo of a beautiful person. In quite a strange way, it perfectly reflects how I approach fashion, in that I think I’ve cultivated a lifestyle where it just makes sense that I walk around in a shirt that has a photo of my friend’s face on it.

A thing I learned quite early on is it’s so much more fun, and it saves you time and money, if you have a brand where you can wear the exact same things at work, at home, if you’re out for a social drink, if you’re at a fancy opening. I have worn this shirt at all of those things. It’s just like, “Oh, yeah, of course Sam has that bizarre shirt on.” 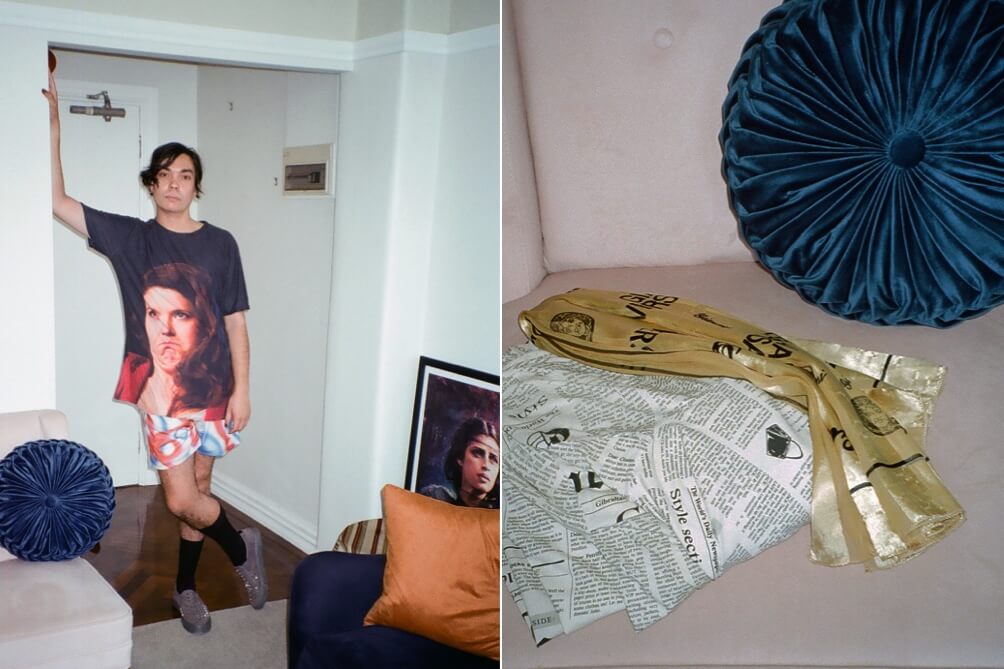 I lost a lot of weight in 2017. I got sick and I lost 40kg in two months. I had to throw out my entire wardrobe, because I literally fitted none of my old clothes… except this guy. A loved one gave this to me when I was 15, and he passed away five years later. He was a mentor figure — seven years older than me, and still the most charismatic person who I have ever met in my life. He always loved playing pranks on me. Like, I thought eggs were dairy till I was 28 because he told me that. I only found out the scarf was fake when someone was like, “That is not a real Versace scarf, Sam.” And I was like, I’m literally being pranked from beyond the grave. It was such a long con. I should have known it was fake, because it looks kind of shit. And I don’t wear this often any more, but I see it on my vanity every morning and night. It reflects him so well, because it’s fun, it’s loud, and it’s fake.

I’d always like to dress loudly, but at the time [prior to losing weight], there weren’t lots of loud options for men who were of a large size. I just found it really, really hard to find clothes that reflected who I am and who I was. Once I lost weight — and I hope this speaks more poorly of menswear than me — I had access to a whole range. I was like, “Oh, shit, this is now a real key part of how I can express myself.”

Fashion is such a good tool to communicate who you are. I have a speech impediment, so all the tools I have help to communicate who I am. Being online is one of those, writing is one, and fashion, in the past five years, is absolutely such a key part of me express- ing who I am and what I want. I’m a lot more comfort- able with my speech now than I was when I started to dress how I do. 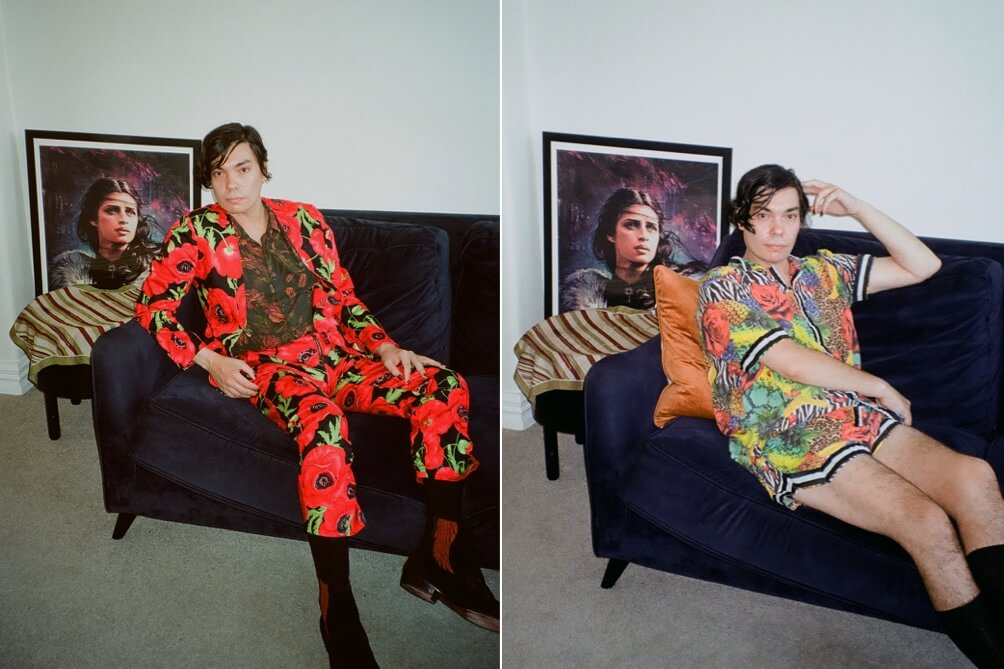 That is a custom suit made by Ben Underhill. He made it for the opening of my show Burn Her in 2018. I’ve never owned a suit, but I was like, I should own a suit, I’m a man in my late 20s. And I’m not a Hallensteins kind of a guy, solely because I love bright colours.

I love a colour clash. I wanted a big, loud suit for a big, loud splashy play. I wore it to the opening of the same play in Wellington where I ran into Ginette McDonald, the actress, and she said, “I haven’t ever seen a playwright upstage his own play before.” I’m extremely fond of it, even though I’ve worn it only maybe three or four times in the past four years.

This Jaded London short suit, though, I probably wear once a week. It is everything I love and am. It’s loud, it’s free-flowing, it shows off what I think is my best feature: legs. My mum said that if I only inherited a single thing from her, it should be both of her legs. And I have. I want to normalise the short suit as something men should feel absolutely cool and fine with. I think it’s nuts that there are men in suits who are at work all through summer in these full-on suits and blazers. I get heaps of compliments in this, and I think it’s because a lot of other men have set the bar just so incredibly boringly low. Just being in a colourful statement piece, people are like, “Oh my God! You’re amazing!” And it’s like, “No, I’m not. I bought this online!” I see people who are really enthusiastic about menswear and I’m like, “Yes, yes!” And I scroll through and it’s just white shirts and chinos. Like, it’s just nicely made white shirts and chinos. Boring! I want more colour and life. I know that a lot of men are really boring, but I don’t think that all of us are boring, and I think that it’s possible for fashion to cater to men who aren’t boring. Oh, that’s an awful thing to say. 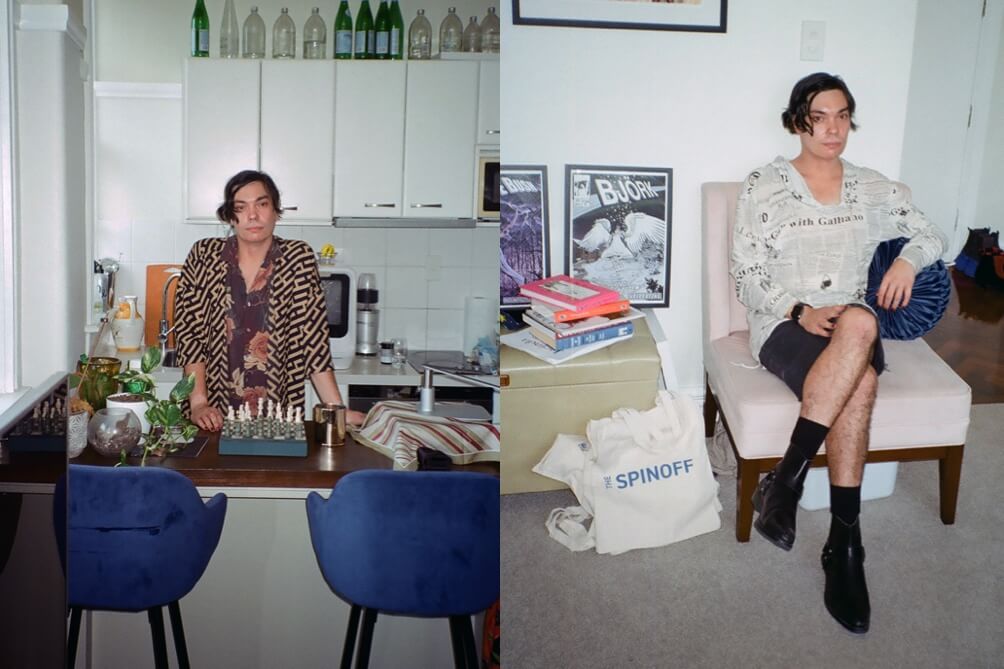 I like the barrier the way I dress presents. Because I have to meet a lot of strangers, if I dress like someone who is light, bright, bubbly, easy — and I am most of those things most of the time — it becomes easier to play into that presumption. There is a theatricality to how I dress that I really enjoy as well. I have a few long, flowy things like this kimono, where

I can imagine myself in a Wong Kar-Wai film moving in slow motion up the stairs as my kimono flows behind me nicely. The first film I ever saw was Chungking Express, at age 3. I don’t have any memory of it, but I assume it’s just in my brain as a formative thing — it’s like part of the Sam Brooks myth.

I would say through winter and spring I don’t go outside and not have a kimono on. Kimonos always just look cool. You feel so nice in one — when you’re re- laxing, sunglasses on, and having a wine, it’s like, “I’m classy now.” Even though I’m drinking at Metrolanes.

Lastly, this is my most favourite-ever piece. It’s the thing that I’ve wanted for about 18 years now. Fuck, I’m old. It’s a Galliano hoodie that fits like a dream. It’s thin, it has all of his headlines all over it. He’s who I’ve been obsessed with since he did those music videos with Gwen Stefani. I found it on Vestiaire Collective, a website that resells second-hand designer clothes. I was like, instant buy. It was 90 pounds for a thing I wanted my entire life.

What I love about this, and what sums up my fashion as well, is that it’s a tool that lets me be me, just a little bit more. It lets me show me, and it lets me be what I consider to be the best version of myself, even when I might not feel like I am. It also just looks good, so that helps.