My life in clothes: Rebecca Zephyr Thomas on glamour and grunge

Photographer Rebecca Zephyr Thomas describes how an anti-fashion phase has stuck with her through her life.

I like high glamour and I also like grungy, and I don’t think that’s changed much since I was 14. As a teenager, I was really into Hollywood stars like Marlene Dietrich, but also reading The Face. And I was well into Winona Ryder. Mermaids, Heathers… Looking back, I think I just wanted to be a photographer because Winona Ryder’s one in Beetlejuice, and she wears cool outfits.

I grew up in the age of grunge and I’ve always liked that era of fashion photography — Nan Goldin, Juergen Teller, Corinne Day — but I also liked the really sexy style of Herb Ritts and Helmut Newton. Neither of those styles is really about the clothes, though.

What was fashionable in the mid-90s was an anti-fashion fashion: it wasn’t about buying an expensive outfit, it was about finding your look. It was before fast fashion. Now, you can see something on the catwalk and buy a sort of homage to it within a month or two. Now, you’ve got the extremely groomed Kardashian look of blow-dried hair and contoured makeup. Back then, it was cool not to try too hard — the Kate Moss look.

This Erdem dress (main photo) is the jewel in the crown of my wardrobe. I met Erdem when I took pictures of him for a French magazine, L’Officiel, and then he started drinking in a pub I worked in. He got me to shoot backstage at his London Fashion Week show a couple of times. Quite a few designers in London just do crazy clothes — that’s a London thing — whereas Erdem makes clothes for Michelle Obama. He’s a serious designer, and his backstage would be beautiful, with millions of florists arranging white roses — incredibly sophisticated and not the normal London style.

He partly paid me in clothes, and I ordered that dress from a photo. When I picked it up, it was my perfect dress. It’s completely sequinned, fishtailed, flattering, and really well made.

I’ve worn it only three times. The most glamorous thing I wore it to was a group dinner with Bryan Ferry at Hoi Polloi in the Ace Hotel, which is easily the most name-droppy thing I did in London. I don’t remember much of the evening because I was pissed and smoking cigarettes outside most of the time. Bryan Ferry said his ideal night was to stay in and read the New Yorker. The perfect man! 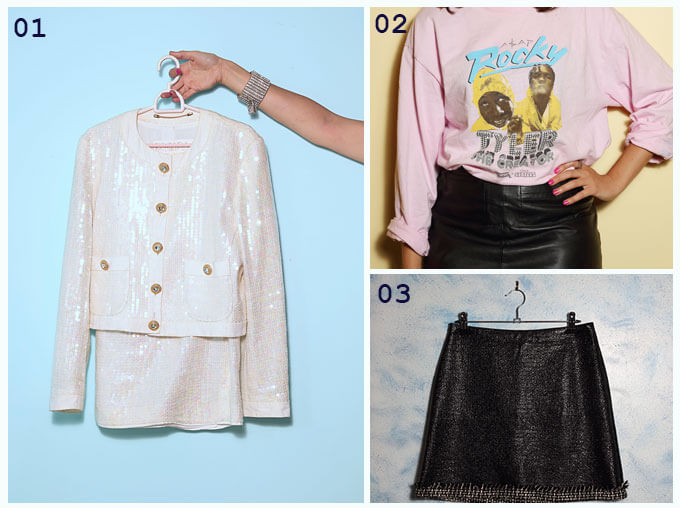 I’ve worn it as a suit only once, to the opening of an exhibition of my photographs of drag queens, in a grimy East End pub. I tried to dress up like a drag queen but I looked frumpy. I had a bad lilac wig and eyebrows made out of gaffer tape. The real drag queens looked much better than me.

When I first moved to London, I was a shop girl at Agent Provocateur and became friends with another girl who’d just moved to London from LA. Her husband’s now creative director for Tyler, the Creator’s label Golf Wang, which I shot for Love magazine, and whenever I go to LA, they give me freebies. This T-shirt (02) is merch from an old tour he did with A$AP Rocky.

Golf Wang clothes are designed for men, but girls would want everything. It’s all wicked. At his music festival, Camp Flog Gnaw, I saw fans queue up all day to buy it. It’s quite hippy-ish, like De La Soul. And it’s inclusive to white, black, whatever, gay, straight. It’s not a macho hip-hop culture. It’s more modern.

I’ve seen teenagers on the street wearing it here, as well. I was on holiday in the Far North wearing a different Odd Future T-shirt that doesn’t have his name or picture or anything on it, just a cartoon doughnut, and I went into a dairy and the girl behind the counter goes, “I’m such a fan of Tyler, the Creator.”

Since I moved back to New Zealand last year, one of the labels I really love is Eugénie. Their clothes are sleek and sexy but in a tomboyish way, and it’s actually wearable. I’ve shot this skirt (03) on my favourite New Zealand model, Polena Yi.

I’ve worn it only once, on a date to a tacky taco restaurant on Sunset Boulevard. It’s ideal to wear if you’re eating Mexican, because it’s made from vinyl-coated tweed, so if you spill food on yourself you can just wipe it off. It’s quite flattering. It’s A-line but still short and sexy and looks a bit Clueless.