Jahra Wasasala: My Life in clothes 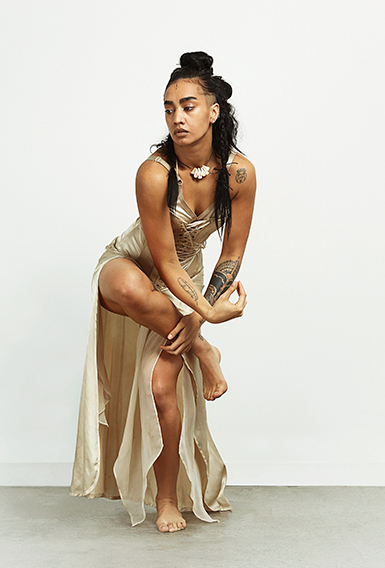 This dress (left) is my solo costume. It was given to me by artist Reina Sutton and it represents everything that I’m not. The way it binds, the colour, it’s so flowy. I don’t wear things like this usually. It’s an idea of bondage and constraint. It’s also the idea of being beautiful, and I’m afraid of that idea. There’s an idea attached to it that leaves me vulnerable.

If I can control vulnerability in performance, I’m all about it. If I can be perceived as beautiful from an outside eye, I can’t control that gaze and then it freaks me out. The dress gets stripped off me during my solo for Tempo [Dance Festival]. It’s supposed to be symbolic of Western standards of beauty.

From the Pacific, I’m Fijian. My mum is New Zealand European. I was raised in West Auckland, by my mum, to be incredibly empowered and believe in my magic all the time. I’m the oldest. Three girls and a boy. My mum has long blonde-dyed dreads, she’s got tattoos all up and down her body, she wears dots on her face. She actually copied me. She wears white ones and I wear black ones. I just started doing it from instinct when I was 17.

I went through the Woodstock-Jimi Hendrix phase and got really into painting my body. As I started to learn more about my culture, I started to see symbols and dots and lines that were prevalent in my cultural background. I incorporated it so I had some ritual every morning that brought me back to myself, kind of like a meditative thing.

I was always into the idea of shifting my form, or my skin — painting it or tattooing it or shaving my head. It was all part of my investigation of how far I could push what I looked like without losing who I was.

The big tattoo on my left arm is pretty new. I went to the Festival of Pacific Arts held in Guam/Guåhån. There were 4000 artists from 27 Pacific nations. I was terrified because I was supposed to go over in collaboration with the poet Grace Taylor but she had to drop out because her mum was sick. I had to make a solo in four days. It was at a time when I was coming to terms with my Fijian culture so I didn’t feel like I belonged there. It was a really healing chapter of the cultural conflict that I’ve had all my life. Then when I got back, there was a tattooist, called Matiah Whaiapu Koloamatangi, who is 21. I just told her what my experience was. She designed the whale tail, which is of the moana. Then she freehanded around it. There are Fijian scales and the Pacific navigation bird. I don’t have any questions about it anymore. I’m a Pacific artist.

I absolutely power-dress. I use my outfit to frame what I already possess and believe in. I really like black and I really like a tea-coloured shirt. I always dye things with teabags. Things never match my skin colour so I’m always on this mission to make things my skin colour, but I never achieve it.

This is my stepdad’s jacket (above right). I like the idea of being cloaked in a fake masculinity. It’s my favourite thing. He bought it for a funeral. It’s all shapeless from me putting it in the washing machine. It’s all falling apart on the inside, which I really like. I have always wanted to be Janet Jackson, so I like to pretend I’m in the Rhythm Nation video. That’s pretty much where the pants come from.

I always wear boots. They just make me feel like I can gap it whenever I need to. I’ve also stomped boys in the crotch when they’ve talked gross to me on the street. I like feeling like I’m flat on the earth and grounded.

When I was dance-training, about second year — as I think happens to most people in tertiary — you start to see what they want you to be, and feel very suffocated. The culture of dance is we’re told to watch and don’t really have a say. Our bodies are given over to the choreography.

Someone showed me a poem by Staceyann Chin. It was this amazing mixed-race Jamaican-Chinese woman talking about religion and race and sexuality in three minutes. She was yelling and performing so loose. As soon as I saw it I thought, “I know this language. I can do it.” I decided that night that I’d be a poet and started writing.

I’ve always been known for wearing heaps of gold. I like to feel like a god. I wear gold when I’m doing poetry on stage. I love the cobra and the idea of snakes around my neck (above). The idea that such a phallic image can adorn me and not control me. I got this from Third Eye but it was an armband so I turned it into a necklace.

I got this top (left) when I was 17 and first discovered who Prince was. He’s been such an icon and leader for how far I can go. I’m allowed to blur feminine and masculine and my intensity is not wrong and my obsession with being an artist is historical.