Both my parents sew. My dad has worked in the fashion industry since his 20s. When I was a teenager, he worked for Trelise Cooper and Liz Mitchell and Keith Matheson. He always included me. When I was little, he’d give me a notepad with a design template of a model on it. So I’d play with those and makeup dresses and design garments.

My mum sews amazingly and made all our clothes when we were kids. I have one brother and one sister, Reuben and Miriam. My brother is an artist and my sister is a nurse. But the whole family are also quite musical, so we all sing and play instruments.

A lot of these [garments] have names. This (below left) is the Jimi Hendrix coat. When I was going to my sixth-form ball, you know how you’re like, I’m not taking a coat, I’m just wearing my ball dress. Then my parents made me one which was so awesome I was like, I can’t not take it. My dad sewed both my ball dresses. I was a massive nerd at high school so the ball was a little Cinderella-ish. At Macleans College, you wear a uniform through to seventh form so it’s kind of your first opportunity to wear something of your own and present yourself how you want to. The coat still gets worn. I love that it’s a little bit Marie Antoinette and it’s a little bit Jimi Hendrix. Dad loves couture. He loves really flamboyant interesting design. Like Christian Lacroix. His name is Paul Stephens. 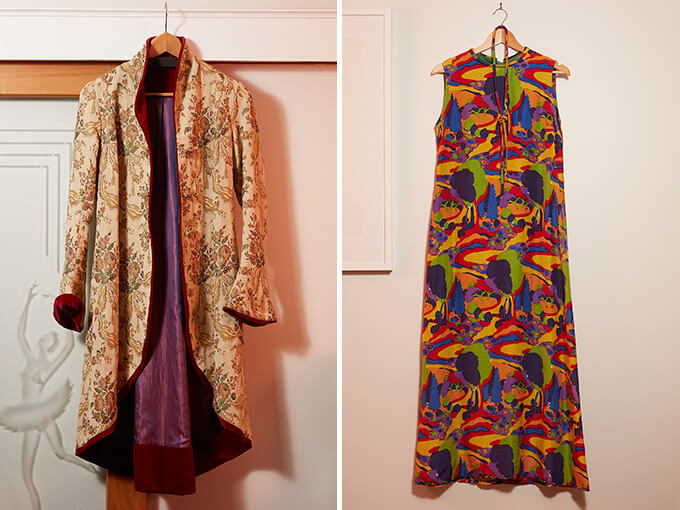 The cool thing about him having that taste for theatrical couture is I love that stuff but I never have the money to actually buy it so this is a nice way of owning something that looks really theatrical and high end without having to spend thousands on purchasing it.

I had a strange obsession with the 60s and 70s when I was a child. I had two 60s and 70s themed birthday parties — my ninth and my 12th. When I was nine, we watched the Woodstock movie and everyone was really bored. Dad is a musician and loved Janis Joplin and Jimi Hendrix. For that birthday party they sewed me heavy tapestry-print flares and a matching waistcoat, and a muslin shirt with ruffled sleeves. I look at the photo and think, I would still wear that. It’s so amazing.

Through my teens and into my 20s, I really became quite obsessed, primarily with op-shopping rather than vintage shopping. There is nothing quite like finding things yourself. And the thriftiness of it, too.

This Yellow Submarine dress (above right) is one of my vintage finds. The last couple of years, I’ve spent every winter doing work in Christchurch for some reason. Christchurch is a really amazing spot for vintage finds. Sometimes Auckland can feel a little cleaned out. There was this one spot called Retropolitan, which has closed down now, where I picked up some really great pieces, including my wedding dress. When I’m vintage shopping, I look for natural fibres and made-in-New-Zealand garments because they just feel like treasures. I quite like looking at the labels and googling them. This is El Jay.

Because I’m a singer as well as an actor it’s handy for me to have a bit of a library of showstopper dresses for things. A lot of them get used over and over again. Like the gold one (top) I wore when Toni [Antonia Prebble] and I presented at the last music awards. I wanted to find something that was cool and sparkly.

One of the things I notice about New Zealand red carpets is Kiwis tend to be quite conservative dressers, so generally you’ll turn up to a red carpet and you’ll be the only person dressed like a psychedelic nightmare in a sea of black. Why not dress up and wear something that you would never normally wear out of the house?

The other place that this got an airing was recently when I did a show called Respect for the Auckland Arts Festival, with Aaradhna and Bella Kalolo and Annie Crummer, singing the music of Aretha Franklin. As a performance dress under lights it really works; it’s like tinsel. 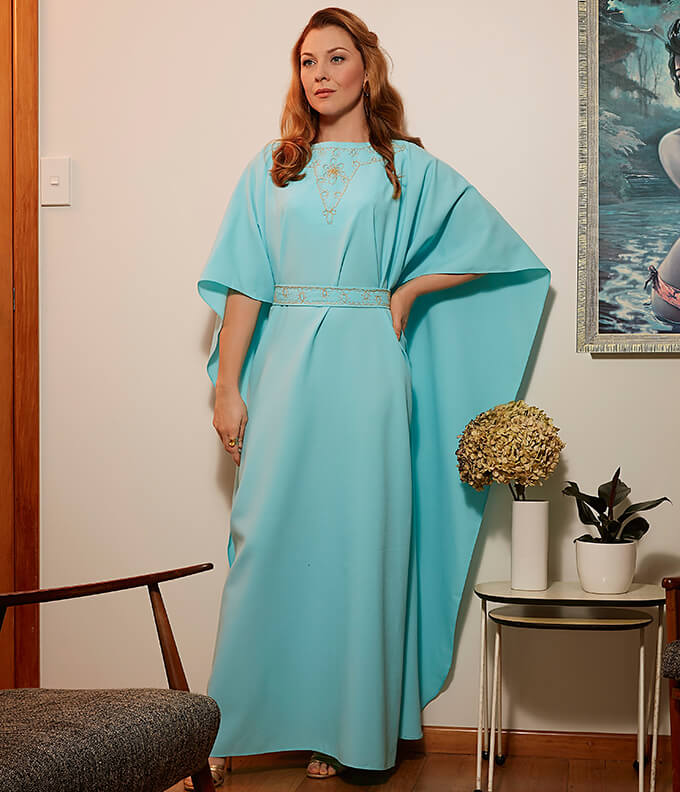 This blue dress (above) I just love. It was the same trip I found the wedding dress. I was in Christchurch last year doing a performance with the Christchurch Symphony Orchestra called Mad Men and Dangerous Women, which was 1960s Rat-Pack-era-type tunes. Normally I don’t go anywhere without a bottle of anti-static because I’m really staticky. I’ve given people electric shocks in the dark where I’ve seen sparks. I have no idea why. You spritz the garment if it’s a synthetic fabric. This one always gets a good spritzing. When I found it, I already had a bunch of dresses I was going to wear for the CSO show and was like, well, that one’s definitely happening. Walking out in front of an orchestra with a cape trailing behind you.

I’d say my wardrobe is 98 per cent retro in some capacity. You get so much better value for money. Fortunately, my husband is also obsessed with vintage and retro. Saturday mornings usually consist of coffee somewhere and then going to some suburb and digging through the hospice shop and the Sallies. He’s a graphic designer but he’s also a DJ, so he’s got a big collection of vinyl and plays a lot of old rock’n’roll and soul. He always has a sift through the records. It’s good to have somebody who feeds my habit. He understands. Most of the interior of our house is from op shops. The latest piece went up last night. Todd found a map of the Whangaparaoa Peninsula from his birth year of 1981 at Junk and Disorderly. So he’s framed it.

I was like, “Babe, that is literally our last spare piece of wall. We can’t put any more shit up.”