As the initial cases of Covid-19 emerged in Aotearoa, artists felt its secondary effects early. International gigs were cancelled, flights grounded and, in some worst-case scenarios, artists had 18 months worth of work (and income) pulled in a matter of weeks. The devastated artist became the common storyline flying around. Yet, less commonly discussed was the financial security of our public art galleries, who battened up the hatches to sit out the worst of the pandemic — relatively secure on long-term funding, confirmed salaries, and some even eligible for further Creative New Zealand support as part of its Covid response. This security meant that no one would have to worry about cutting staff , or exhibition budgets. They knew, too, of course, that the bigger galleries would soon be able to reopen again in a ‘new normal’.

This contrast in the fortunes of the artist and public gallery reminds us that a) the impacts of Covid-19 were not felt equally in the arts, and, b) there’s an invincibility sitting on secure funding. Long-term funding is a bit like a forcefield that offers the chance to send vibrations out into the world without having to worry about what comes back, because what comes back (if anything) will just reverberate off the protective layer. I think about this particularly in relation to art galleries that are self-mandated to serve various communities, yet their accountability is actually tethered to the higher powers that be.

While that kind of tethering is, for some, the ultimate goal, for other artists and art workers, there’s a desire for a greater sense of autonomy, to operate more independently, and to tether themselves to the communities they aim to serve. This tethering also means the community can be the difference between your doors being opened or not — bringing a whole other meaning to the notion of community accountability. This mode of operation is completely different from the model of secure funding, and a model that for two particular spaces in Auckland City, Vunilagi Vou and Moana Fresh, seems to be working.

Vunilagi Vou opened mid last year as a gallery, retail and consultancy space in Ōtāhuhu’s main shopping strip. After a string of exhibitions, public programmes and talks, the physical premises were closed early into the first lockdown. After a period of reconceptualising what the space could be, construction on Vunilagi Vou 2.0 started, and curator and manager Ema Tavola moved Vunilagi Vou to a repurposed garage at her family home. The space reopened in mid-October with Fofola Koloa — Unfolding my Koloa, an exhibition by Vea Mafileʻo in its current location in Papatoetoe as a private-appointment-only gallery. Crowdfunding for 2021’s exhibition costs, Tavola met her target in 13 days — less than half the planned time, with more than 90 individuals supporting the artist curator with their wallets, which is more spectacular considering the vagueness of the details surrounding what that 2021 exhibition programme would actually be.

On the other side of town, Moana Fresh was started by Ahilapalapa Rands and Vaimaila Urale as a casual way of selling some of the products of their “side hustle” before Christmas last year. Feeling a bit of shame around selling their own works, they invited other artists to contribute, selling on their behalf, in the end including 22 artists in total. With low expectations, and partly in it for the “lols”, they blew themselves (and I think everyone else) away when for their first pop-up — just a window and a trestle table on Avondale’s Rosebank Rd — they almost sold out, selling over $10,000 worth of everyone’s art to the mostly Māori and Pacific buyers. Once Covid hit, the pop-up model quickly became redundant, so the pair started preparing a shift to e-commerce when the Black Lives Matter protests spread across the globe. After trying to help Pacific people in America raise money for the cause, they decided to make their own t-shirts to sell, which became the first of Moana Fresh’s kaupapa tees, which fundraise for various causes, launching a website specifically to sell the t-shirts. Since their release in June, Moana Fresh has raised more than $11k for the movement, sending tees as far abroad as Canada, the UK, Japan, Ireland and Finland. Today, a year on from that amateur street-side venture, they are getting ready to open their physical store to the public.

Seeing both spaces enter into their new phases shows the organic power of community backing. Not the kind of backing that requires turning up to openings, but the kind of support where in the middle of a pandemic, people are donating to crowdfunding campaigns and buying goods to the point where businesses can expand. So what is it that drives the community to support both Vunilagi Vou and Moana Fresh?

While they’re often described as in their infancy, both Vunilagi Vou and Moana Fresh are spaces that have come into being only through significant careers in, and commitments to, the arts. With this length of service comes an absolute love of art, something clear in both spaces. But this is coupled with a refusal to participate in the current art market, a market that tends to be exploitative and is often physically and emotionally draining for artists, not to mention financially precarious.

In 2019, Vaimaila Urale and Ahilapalapa Rands were active participants in the global art world, with exhibitions in Hong Kong, London and Vancouver. On paper, it looked like everything an individual artist wants for their career. However, they were actually both financially and personally unsustained by their participation, and sick of performing what a “successful artist” was. The two have a long history of collaboration, including in D.A.N.C.E Art Club, well known for their public-facing performance practice. With Moana Fresh, the two approached the project as artists, falling into the caring and earnest way they usually work with each other. Their desire was for Moana Fresh to be both safe and unconventional for themselves, artists and audiences alike. 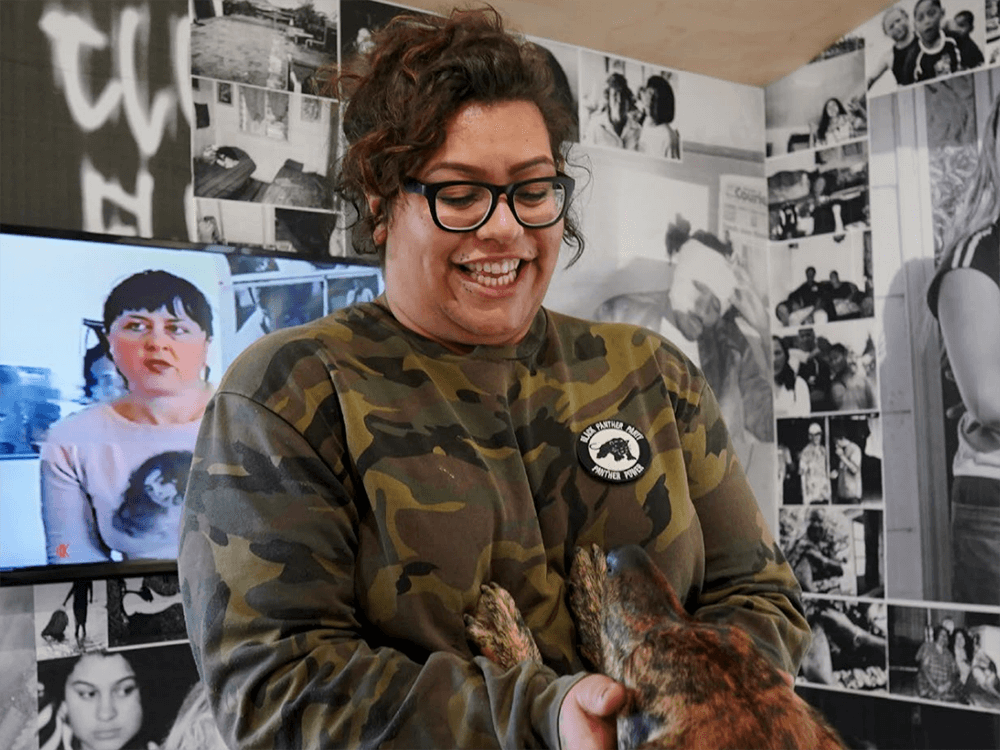 For Ema Tavola, Vunilagi Vou is the result of an 18-year-long curatorial career. While moving Vunilagi onto her own property off ered her the comfort that overheads were covered, the new space brings a greater sense of freedom, where Tavola and her arts community can make exhibitions that are experimental and daring, precisely because of the low financial risk. Through an appointment-only structure, there can be real intention about who sees and engages with the art shown, offering artists the chance to be brave with work that they may not be so comfortable with in a public gallery setting. What was most important for Tavola was to do the things she loves the most, bringing people into a space to talk about art. Being in the space with Tavola, there’s a sense that her entire career has been building to this moment. It feels grounded and right.

Maybe a part of what makes Vunilagi Vou and Moana Fresh successful is the uncompromising approach of being their full selves in their work. For Tavola, this full self includes being a mother. Art likes to divide a woman’s intellectual labour from domestic labour, but with both Vunilagi Vou and Moana Fresh, there is an uncompromising combination of them both. Being a mum is “having real deadlines”, Tavola tells me. For Moana Fresh’s Urale, these real deadlines of the school pick-up were a big consideration in the location of their physical premises and their operational hours. If Moana Fresh was going to work as an alternative to the standard art market, it needed to make sense for her family life. These are spaces not where you ‘balance’ the parts of your life, but where they co-exist. While Tavola has done a great job in dividing the gallery from her home, you still are very aware that you are in a domestic environment. Beyond your view washing is drying, and the family dog, Lady, runs around. Art is bent to fit the mother, not the other way around. It is, after all, her daughter Lanuola’s gallery, too.

For both Vunilagi Vou and Moana Fresh, the shift out of the traditional art pathway has been met by audiences who have followed and supported them relentlessly. When I ask Tavola who Vunilagi Vou’s art community is, she tells me it’s people who have a real vested interest in the artists she works with. They’re also an audience of people who similarly push against institutions, people who “changed the game in what they’re doing”. Both Vunilagi Vou and Moana Fresh draw heavily on a digital audience. Tavola has been building this audience over nearly two decades of blogging, Facebook, Twitter and Instagram, and they have followed and supported her across numerous ventures and journeys. While Moana Fresh’s audience is much newer, it seems equally influential and has opened the faucet to a brown economy hungry for Māori and Pacific art. Urale and Rands remember the first pop-up when it would look like the two of them were on their phones with no buyers in sight, when in actuality they were both being swamped by orders coming through their Instagram direct messages. I asked them what’s the gap they’ve found; they tell me they’re just trying to be approachable and accessible. “We could not exist without the demand of our community,” Urale says. And that community is mostly Māori and Pacific women, who aren’t usually considered to be a target art market.

But Moana Fresh’s main business is perhaps servicing the artists they work with. Rands and Urale have a genuine desire to help their artists thrive. While some have been well-known artists and friends the pair have reached out to directly, others have been random passers-by who have got talking and shared their own side hustle with the duo. Seeing them talk about their artist community, Rands’ eyes well up. It’s clear how their care for people drives their work. She tells me that she feels so proud, like a “proud mum”. Urale adds: “We’re being led by the magic and taking people with us.”

In what has been an incredibly bizarre year, seeing independent art spaces thrive is like watching roses grow through concrete (to borrow from Tupac). Vunilagi Vou and Moana Fresh pose new and exciting possibilities for Auckland’s art scene, which has been barely holding on for a while now. It feels like we’re just on the cusp of a new wave — only time will tell what exactly that is. 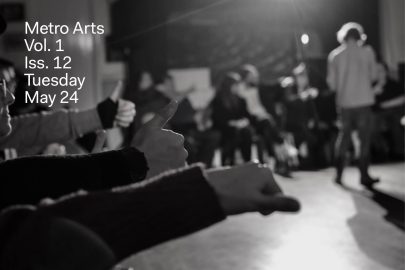