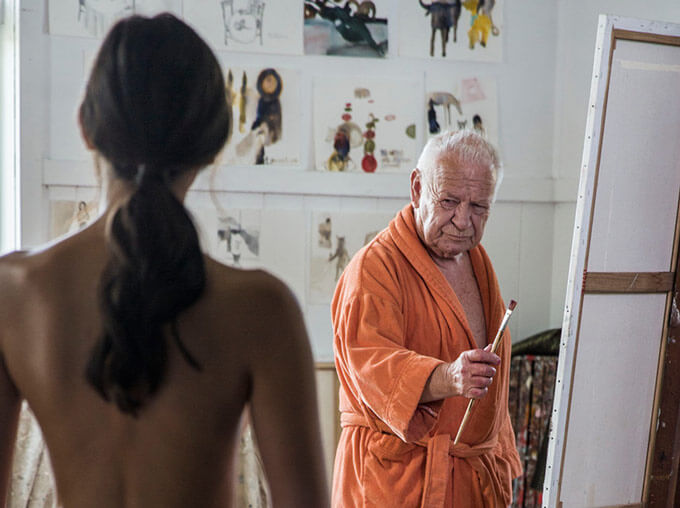 Playwright Carl Bland and director Ben Crowder are astonishing collaborators, making work that is both lyrical and cheeky, balancing pathos and bathos, and the profound and the profane.

In 360 their stage was a ‘circle of life’ starring a performing seal. In Te Po characters became aware of their own fictionality as a curious giraffe watched over them. In Spirit House, Bland and Crowder return to the same well for more musings on mortality and existentialism, and push themselves to up the ante with their theatrical innovation. Rodents dash across the floor, objects materialise out of actual pools of water on the stage, and a cat smokes a cigar. Aesthetically it’s an impressive production, but thematically their creative well is running a little dry.

The play parallels two different kinds of artists. In artistic exile in Nong Khai, Thailand, Charles Dixon (Ian Mune) has been painting the same image for the last twenty years: a faceless woman painted from behind. Steven Glenn (Tim Carlsen), who has built his career Billy Apple-like by becoming his own brand, frets about a bad review from his last exhibition. He too has come to Nong Khai, and in Dixon’s paintings seems to find an artistic authenticity that he perceives he lacks. Both are worried that they will never match their early work.

It becomes clear that Dixon and Claude’s stories take place in quite different time periods. The glue that holds them together is Sonia (Mia Blake), whose role is as a muse to Dixon and a provocateur to Glenn. Sonia is to be painted by Dixon, who speaks of wanting to “inhabit whatever I paint… in order to feel you.” The sexualised nature of his artistic philosophy is demonstrated rather bluntly by a sculpture with a wildly out-of-proportion phallus that he gifts his subject-to-be.

Mune emphasises the caustic determination of a painter approaching the end of his life, while Carlsen plays up the absurd mania of an artistic identity crisis. Blake’s remarkable performance is like quicksilver, shifting modes and tones, caught between the two men (or has she caught them?).

We also meet Claude the cat (Min Kim), who is the real master of this house.  Main Reactor have done superb work crafting an oversized feline head, which, combined with Kim’s alert physicality, makes for a vaguely uneasy presence.

The onstage musician, Pongsaporn Upani, provides a further link between the stories, and one of the delights of this production is to watch him at work using an array of instruments. He also provides vocal sound effects: his evocations of bird-life suitably mocking the absurdity of the characters.

Bland wrote the play while he himself was in Nong Khai. The world and soundscape is clearly richer for this experience, but on the other hand, we have an exotic background for a western story with Thai culture pushed to the edges.

There are many secrets in Spirit House, embedded both in the set (“How did they do that?” was a common foyer question), and in the story. When it’s working we are captivated by how it all fits together. John Veryt’s elegant set and Rachel Marlow’s lighting converse harmoniously with each other, moving us seamlessly through both time of day and time itself.

Bland reveals a sadistic streak towards some of his characters as they clock up a number of wounds, bumps to the head, and cat bites, to emphasise their fleshy mortality. There’s also a particularly gruesome artistic self-mutilation to outdo Van Gogh. These eruptions of violence provide punctuation for what is otherwise a rather heady script. Themes are over-laboured, anxious that we might not get the ideas behind it all.

There’s a revelation at the end that explains most things (the clues are all there) that should be a cathartic release, but unfortunately does not reach it. The first issue is that it arrives via an arbitrary trigger point rather than the characters fighting for the truth. The second is that the play, enamoured by its own cleverness, takes its sweet time getting to the conclusion, risking the audience switching off on the way.  But the larger problem is that it is all rather soulless. We are given little space to feel anything, or to borrow an idea from the play itself, have not been allowed to inhabit these characters.

Sprit House is complexly cerebral, with moments of theatrical wonder, but emotionally dry. There is some irony that a for play about artistic anxieties, its form and content reflect each other a little more closely than perhaps intended.