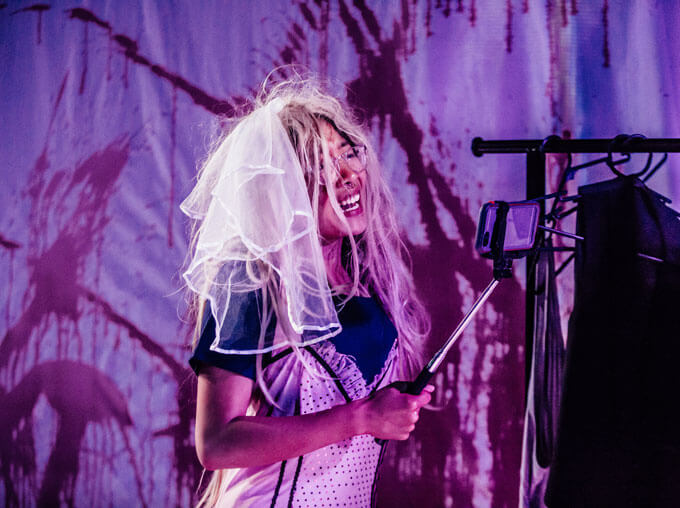 Silo Theatre and the cast of Revolt. She Said. Revolt Again. were out in force at the Auckland leg of the Women’s March on Washington.

The Silo team carried banners quoting UK playwright Alice Birch’s text: “Revolutionise… the world… the language… the body… the work.” The Auckland march was not your usual protest: half-hearted chants rose and died. For many, moved to walk in solidarity by the idea that “women’s rights are human rights”, it was a new experience.

One of the remarkable aspects of the Auckland march in January was the complete invisibility of police, even when the 1000-plus protestors defiantly spilled off the footpath to storm up Queen Street. The organisers were told that women are safe. Therefore, no police required. I’ll mention this anecdote to contrast the quote from historian Laurel Thatcher Ulrich that inspired Revolt: “well-behaved women seldom make history”. Presented in this post-march climate, Birch’s play resonates in its question of what meaningful gender resistance might look like. Does the global Women’s March movement represent a new wave of feminist radicalisation, or will the revolt be short-lived?

Silo has overtly marketed Revolt as a feminist work, calling it “feminism at its messy edge”. Calls to action are projected as text and spoken by Rocky Horror mouths: Revolutionise the world (don’t marry); revolutionise the language (invert it).

Indeed, one of Birch’s main concerns is to make visible the gendered power structures of language. The first scene is a linguistically tortured foreplay between a man (Fasitua Amosa) and a woman (Sophie Henderson), seated with a great distance between each other. He wants to make love “to” her, but she counters: why not “with” her? And on it goes, the scene upending the language that we use to describe sexual acts and flipping the codified assumptions of agency and passivity. Amosa becomes increasingly unsure about what he can and cannot say.

Linking the early scenes is this focus on male confusion around what is permissible. The first words spoken by Amosa are “I don’t understand”, a phrase which echoes throughout Revolt. The second scene has Amosa on a bent knee looking on in bafflement as Michelle Ny wonderfully rejects his unexpected proposal, questioning the hidden implications and assumptions of what marriage actually means. Then we get Amosa as a mansplaining manager, negotiating with an employee (Amanda Tito) regarding her request to have Mondays off. As he ineptly questions her about her possible motives – pregnancy, not being paid as much as the boys – the audience cringes.

The next scene is a confrontation between supermarket workers and a customer (Tito), who has exposed her body in their aisles. Tito sits inside a trolley as they rant in anger against her transgression; she greedily slips her hand inside a watermelon and gulps down juicy, fleshy chunks. Revolt begins to shift away from the male energy when Tito responds to her accusers with a devastating history of her body as a space of invasion. When the text ‘Revolutionise the world (don’t reproduce)’ pops up, the stage becomes an apocalyptic, barren, man-free zone, and motherhood becomes redefined as an unnatural act. 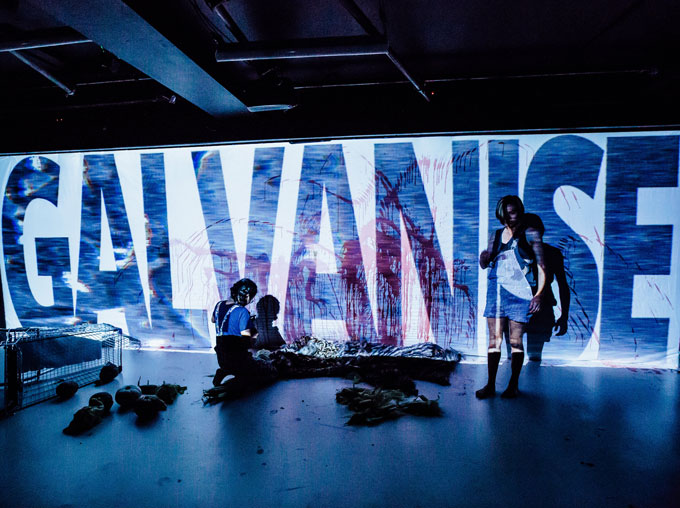 There have been glimpses of anarchy throughout, but after this scene Revolt stops being well-behaved. Birch’s image-laden language breaks down, and director Virginia Frankovich flings us into a messy, chaotic climax where ideas come at rapid fire. There are warnings against going down alleys and a fraught attempt at proving assault. We see anxieties about how to do feminism, whether it’s too co-opted by capitalism, and whether they are passing the Bechdel test.

Revolt is profoundly ambivalent about its feminism, whether change is possible, and if it is, what it should look like. There is cynicism about progressivism. There is rage, and there is weariness. In the work scene, the manager asks, “Is this about protest?”, to which Tito replies, “It’s about sleep.” There are worries that we have been too content to equate thought with taking action.

Revolt does not make a firm stand – and just as its teasing us that it might, it subverts itself again and pulls away. It does not offer comfort, but nor does it get too uncomfortable. Both self-identifying feminists and the Bill Englishes of this country will leave without getting too shaken up.

Frankovich makes an impressive mainstage directing debut for Silo, delighting in incongruity and unexpected visual collisions. Where Birch instructs that “this play should not be well behaved”, Frankovich goes for naughtiness over danger, letting us too easily off the hook.

The centrepiece for the Auckland Fringe Festival (21 Feb–12 March), Revolt zips along in an hour, which gives you the perfect opportunity to extend your evening and take a punt on other Fringe shows at The Basement and surrounds.

Revolt shows how insidious language can be in framing gender relations, and that no profound change can happen until the language itself changes. But Birch’s text also implicitly shows the power of language as a tool for resistance, and has great fun messing around with it. While the revolution waits for another day, Silo’s Revolt continues to chip away.

Revolt. She Said. Revolt Again, at Basement Theatre, until 11 March.