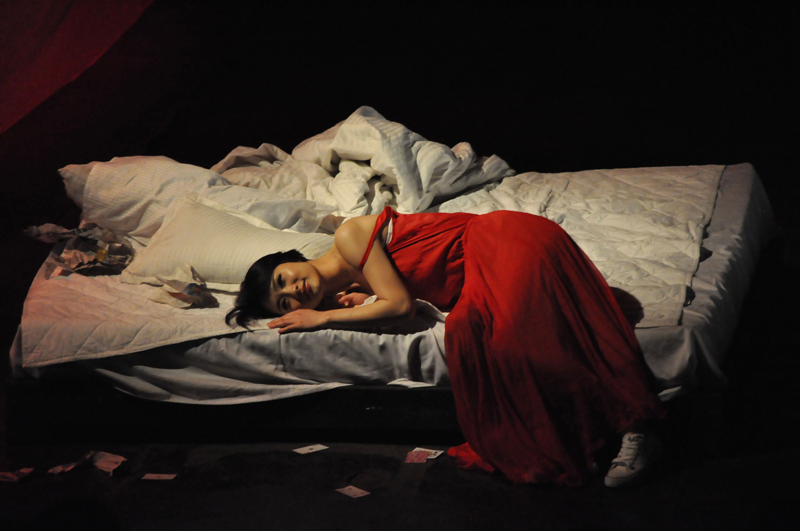 A play in Mandarin with English surtitles about a rhino keeper’s unrequited love for an office girl sounds like a risky artsfest roll of the dice.

Judging by the hoots of laughter, from the kind of diverse audience only Auckland could throw together, and sustained applause, last night, Rhinoceros in Love might yet turn out to be the sleeper hit of the festival.

Playwright Liao Yimei was the right person at the right time to capture the angst of a generation coming of age in a post-Communist China at the cusp of the millennium.

The characters define themselves as Generation AY, as in Angry Youth. When the play was first performed it must have been like hearing the first chords of grunge. Who doesn’t get the young’s irreverence and disdain for the establishment, whether capitalist or communist?

The main characters Ma Lu the rhino keeper and Ming Ming, the object of his obsession, are culturally marooned. Abandoned by the certainty of Communism, they are buffeted by the easy pleasures of consumerism and pop culture. The market moulds their desires and needs.

While not a revelation that the same crap sensibility clogs prime time everywhere, the fact it is as universal as unrequited love ensures little is lost in translation.

Ma Lu and Ming Ming’s dark love story bookends a disciplined display of physical theatre that serves playful pokes at everything from craven sales techniques to game shows, soaps and advice for the lovelorn.

It is not all good. The set suffers from avant garde clichés: a television set showing static, a couple of unmade beds and back and side drops of clear polythene that run full height.

The production should consider trimming the finale, which is overwrought and kills the production of momentum.

If you are curious about the cast, blame a programme with no details about the performers. This is a serious lapse as the actors deliver skilled and passionate work that deserves recognition. Roll the dice while you can. Rhinoceros in Love is a winner.