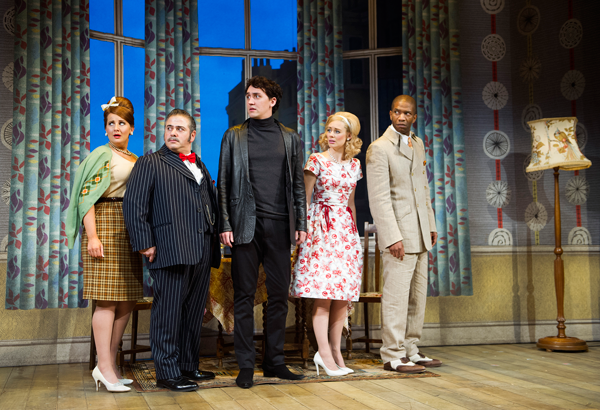 There are sequences of enormous hilarity in the National Theatre’s international smash-hit One Man, Two Guvnors, and a great number of incidental moments scattered between those sequences that are also side-splittingly funny. It can’t be denied, they know how to make you laugh.

Which makes it all the more surprising when they get things horribly wrong. To be sure, they skate on thin ice right through the first half, creating a sophisticated environment where you become less and less sure what’s planned and what’s out of control. To start with, there’s a lot of corpsing – the theatre term for actors losing their concentration on stage and starting to laugh. It goes on and on and on. It’s like they’ve been a little too seduced by the Auckland summer earlier in the day. Planned? Presumably yes – at least for the most part.

There are several extended bits of business with the audience, orchestrated by the mostly brilliant Owain Arthur in the lead Harlequin role of Francis Henshaw, and they are for the most part very funny.

Then, at the end of a lengthy and superbly elaborate sequence of slapstick involving the full repertoire – lots of doors, food, characters who must not discover each other, a fall guy who keeps getting hurt – they do something for me that crosses a line. I won’t give it away, because the whole thing turns on the audience not knowing what’s real and what’s not. But it shattered my confidence in the show – it made me believe they were simply having a vicious laugh at the expense of an audience member. And, by extension, the rest of us.

Why go to the theatre to be made fun of?

All that aside, the first half of One Man, Two Guvnors is a splendid farce. That’s when most of the blunders and misunderstandings and foolishness – the great nonsense of the plot – takes place. In the second half, they do little more than play out the consequences to their inevitable happy-all-round ending. But the second half is also paler because the spark has gone. After that shock at the end of the first half we’re much less inclined to laugh, and Owain Arthur isn’t trying very hard to make us anyway, and without his genius fully in play it feels mechanical.

There’s a terrific live band, and lots of terrific lines too: “Love goes through marriage quicker than shit through a small dog” will be hard to forget.

Disappointed? You bet. What the National Theatre does with One Man is show us a whole lot of thoroughly polished stagecraft, and make us feel distinctly uncomfortable for the privilege. Ha ha.