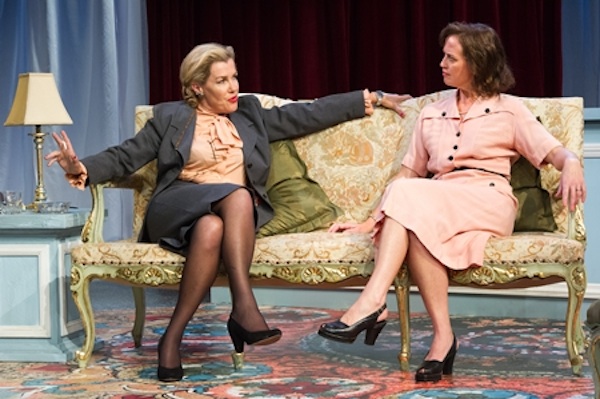 As a theatre the NZI Room at the Aotea Centre is a good function space. The seats are plastic and unyielding; the walls are resolutely grey and beige. More Powerpoints than any sane person could possibly bear have been delivered in these confines.

So it is more than a minor miracle that the people at the Edge and the Auckland Theatre Company production and creative crew have managed to resurrect a resoundingly good piece of theatre after fire left the Maidment Theatre, the original venue, out of action. There’s even a revolving set, which for my money, always adds to the satisfaction of the best theatre as a piece of fine watchmaking.

Playwright Dean Parker has often focussed on social justice and a view from the left. And certainly the story, the possibility that spies were at work in the New Zealand embassy in Moscow in 1947, features in microcosm the great struggle between capitalism and communism in the early days of the Cold War.

Thankfully this is no history lesson. In construction it is a satisfyingly traditional drawing room comedy of manners, with deeply political undertones. Parker has a great deal of fun, referencing playwrights from Gilbert and Sullivan to Chekhov, poets from Pasternak to Donne.

This is a wordy play, but the prose never feels forced and has a ridiculously high bon mot quotient. This bunch of New Zealand diplomats is a privileged elite, prone to copious drinking and a worldly cynicism about their minor role in the game of empires. The genteel living room of the embassy becomes a battleground for a droll class war, New Zealand style when a cocktail party wasn’t spoiled by the need to encourage trade deals.

However the heart and star of Midnight in Moscow is the wonderfully complex character Kit Lovell-Smith. Lovell-Smith is the ultimate urbane diplomat, charming, intelligent, and tragically self-loathing. His monologues open and close the production and each is a piece of breathtakingly fine prose, equally matched by Carl Bland’s performance, the finest this reviewer has seen this year.