MacBeth in the Congo

You thought the Scots could be scary? Wait till you see what happens in this version of that terrible tale. 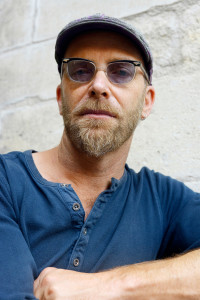 Brett Bailey is not an opera guy. “I don’t listen to opera. I’ve never listened to opera.” He’s in town to direct a production of Verdi’s Macbeth, now spelled macbEth. It’s not what you’d call a traditional take on the story.

“I’ve been aware of the wars in the Congo for a long time. We’ve got a huge number of Congolese refugees in Cape Town, where I live. About five and a half million people have been killed in the last 20 years, in the great lakes region of the Eastern Congo, but a lot of South Africans don’t know anything about it. We don’t know where these people come from, and globally this issue doesn’t get much attention at all.”

So, Verdi. Obviously. “The opera is really stripped down, focusing heavily on Macbeth and Lady Macbeth, but recontextualised within the holocaust of the Congo wars. The whole thing is about 100 minutes now.” Verdi’s version runs an hour longer. “The instrumentation has been reduced to 12 musicians, we have 10 singers… the witches have become a group of multinationals, who are in there to strip the resources out of the earth at any cost. I’ve chopped things around a lot.”

Chopping things around could be Bailey’s motto. He’s an installation artist, a playwright, and from 2007 to 2011, he was the curator of South Africa’s only public arts festival, based in Cape Town and chirpily named Infecting the City. His oldest job title, and still the one at the heart of his working life, is theatre director.

“I’d never acted, but in my second year at the University of Cape Town, I registered for a drama course… there was this girl I liked. We wanted to do a course together, and drama was the only thing that fitted our schedules. She dropped out after the first day and I stuck around for the next 25 years. Life, eh.”

Life, and also death. He wrote his first play in the wake of a minibus crash, a witch-hunt and a wave of lynchings. After university, he had travelled to India. “My grandmother was a spirit medium, and she was always on about India; I went over and spent a lot of time in Buddhist ashrams, doing meditations” — and then back to South Africa, after it occurred to him to wonder why he was searching for a spiritual path overseas when his ancestors had been in South Africa for 300 years.

“I lived for three months in a very remote rural village, with a group of sangomas, traditional healers, a little like shamans — they make a direct connection with the ancestors, they’re very in touch with the folklore of their people and they’re herbalists. Fascinating for me.”

That was where he was the day 15 schoolboys were killed in a minibus crash quite close by. “One of the survivors said that as the bus rolled he’d seen 15 naked women standing in the headlights. These were presumed to be witches, and so a witch-hunt was conducted and a lot of people were killed. It became quite a saga. I went to the town and interviewed the people involved, and from this I developed my first play.”

Note the witches. In the course of staging that play, Zombi, Bailey founded the theatre company Third World Bunfight — or rather, he held open auditions, found 60 people who could act, and promised to split the takings when the play went to the national arts festival. “Bit of a shock to them to find out how little that amounted to. After the zombie play, I developed two more pieces with a similar aesthetic — celebrating cultural collision, First World meets Third World, with very strong African design techniques.”

And then he was asked by the Cape Town Opera School, which trains mostly black singers, to direct an opera and give it an African twist. This was 2001: no Wikipedia. “I looked through opera encyclopedias for something that would appeal to me. The plots were ridiculous and the librettos were ludicrous, and I couldn’t connect to anything. Until I came across Macbeth.”

The current macbEth is Bailey’s third. The previous two were more about the witches; the Macbeths themselves barely featured. What drew him back this time was the scope to explore the ongoing Congo situation. “It was an obvious thing to do, but it wasn’t easy. Lots of grappling. My first impulse — it lasted a good year or so — was to try to tell the whole of the Congo story through macbEth. It took me a long time to realise that it’s a bit like Cinderella. If you try to squeeze the ugly sister’s foot into the glass slipper, you just end up damaging the slipper. Finding a way to allow the story to sit within the context of the conflict, that took a long time.”