"I want it to be dangerous." Musical Director Sxip Shirey on LIMBO

Limbo’s musical director Sxip Shirey says we’re all too comfortable. He aims to shake that up with acrobatics, tumbling, fire eating — and the sound of marbles rolling in a bowl. 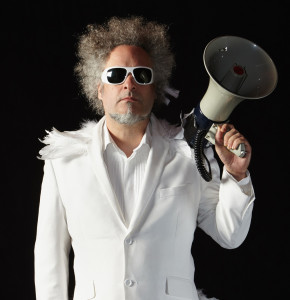 If you’re about to run up a pole, work up a good hoik and spit on your shoes, then rub it in feverishly. I know this because I had the good luck to be sitting next to the bar during Limbo at the Sydney Festival, a few weeks before the vaudeville circus comes to the Auckland Festival. The show moves at such a ferocious clip that between acts French acrobat Mikael Bres has to sprint from the stage, hunch behind the bar and strip off his pants for a quick costume change before his next gravity-scoffing spectacular.

Bres then leaps elegantly back into the spotlight — scaling, spinning and plummeting from the pole in time with musical director Sxip Shirey’s beautiful melodic refrain “Watch Me While I Fall”.

“My work is not ironic,” says Shirey, who has played on Broadway, toured with the Dresden Dolls and composed for film and a Dali exhibition at MoMA. “I hate with a ferocious passion the ironic hipster culture. It’s social posturing. I’m interested in people who really go for it and don’t just talk about it.”

A master of invention, Shirey is inspired by punk, gypsy brass bands and hip hop, using dozens of instruments including trumpet, banjo, saxophone, penny whistles and his own homemade sound-emitting devices to create what he describes as “like music from a city you haven’t been to yet”.

Circus as an art form astounds Shirey. When composing for Limbo he wanted the music to be just as sexy, exciting and visceral as the acts of daring. With his wild, folk punk score, Shirey has laid down the gauntlet for similar shows that rely on pre-recorded music. “I really wanted to make it hard for people to do circus without a live band ever again,” he says. “Why do we have live art if it’s not going to be live? You may as well stay home and watch a movie. I want it to be dangerous.”

Shirey’s current fascination is bells. “In our environment, they exist to give orders. Using bells as a compositional device is powerful because the listener is already wired to hear them.” He scours hippy shops and Tibetan stalls for just the right brass clang to add to his arsenal.

His most simple instrument, and the one that always gets the biggest reaction, is a marble rolling around in a bowl. Somehow, with a microphone and impeccable timing, Shirey wizards the movement into music. It looks like something you could pull off at home, but you know it’s not — it’s just as dependent on timing and skill as the tumbling, dancing, clowning, aerial acrobatics, fire eating and sword swallowing on the Limbo stage.

It’s a sign of our times, when bombastic Michael Bay films make the impossible seem banal, that audiences sometimes need a prod to see what’s really hap­pening before them. At one point in the show, Russian acrobat Danik Abishev jumps from one pole to another on his hands. It’s a flabbergasting display of strength and control. Yet, Shirey notes, Abishev always gets the biggest cheer when he (fake) wobbles. “We live in a culture where people are so comfortable they have no idea what their own bodies can do or not do.”