Boys Will Be Boys - review

Above: Jennifer Ludlam and Amanda Billing. Photos by Andi Crown.

How do you put a new twist on stories from the ruthless world of financial trading? Easy: make your protagonist a woman. Suddenly, tellingly, you have a refreshing take on the genre and a story we haven’t really seen before. Astrid (Amanda Billing), the sole female trader at her firm, is here to out-Gekko Gekko, out-wolf Belfort. Problem is, she still has to answer to and mollify her male boss.

Boys will be Boys will not surprise anyone when it says that big business remains a man’s world. Just try counting the number of female CEO’s in New Zealand’s top 50 companies right now. You won’t need to lift a finger. Where Aussie playwright Melissa Bubnic wants to surprise, even shock, is Astrid’s attitude to it all.

Astrid would have chortled at the breaking glass-ceiling graphics Clinton used at the Democratic Convention. She’s no friend to the sisterhood; she’s a man who sits to pee. Since she’s concluded long ago there’s no possibility of changing the system, she’ll exploit it for her own ends. Her hot-take advice to new mentee Priya (Vanessa Kumar) is to whore herself. Their business is not currency trading, but sexual trading. Keep the clients happy, give them what they want, make mega-bucks. Win-win. Except, now Astrid is in her 40s, her business model faces a sustainability issue.

Bubnic plays with the Madonna/whore binary so often employed in female representations by having Astrid pick up a sex worker (Jodie Rimmer) early in the play. Is Astrid, who claims never to have had any female friends, really looking for an intimate connection? Is this a power play – men do it, so she can too? Or does she have a larger scheme brewing?

Billing chews and spit-fires out Bubnic’s acid-tinged dialogue at a relentless pace, delivering her put-downs and provocative truth-bombs with delicious glee. Still, Billing hasn’t yet found the full potential of Astrid’s hard edges. The whole play pivots around Astrid’s desire to out play the boys at their own game, but at times it’s like watching Orange is the New Black’s Chapman trying to be a thug, only convincing in short bursts. 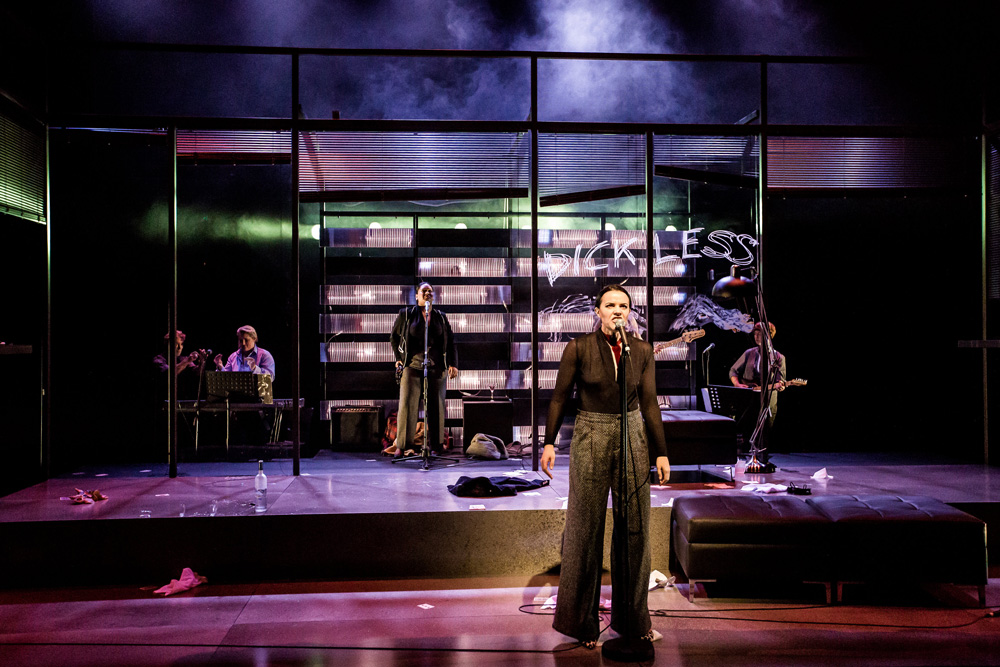 Vanessa Kumar plays protégé Priya as a stiff automaton in her opening scenes, her way of protecting herself in this cut-throat environment and masking imposter syndrome. She soon hits the old boy’s network when the preppy Harrison (Lucinda Hare) gets client responsibilities before she does. There’s an All About Eve narrative happening between Priya and Astrid, where the mentee replaces the mentor, though her arch could be given more room to climb before she has to decide whether she’s prepared to fight the system, or make a deal with the devil.

For a change, it’s the male characters who are most one-dimensional. Arthur is the clearest villain, more repugnant than Astrid, but then, he’s the one with the most power. He’s played with chilling reasonableness in an astoundingly transformative turn by Jennifer Ludlum.

Oh yeah, there are songs in this too. The cabaret interludes continue the theme of gender as performance, and Billing’s versions of standards from 1950s/60s singers like Nina Simone and Etta James, dials up her character another level. With asides and stories to accompany the tunes it’s her chance to manage her representation. She’s eager for us not to like her, to withhold any patronising pity. It’s through these moments though she’s humanised, and her candour often works to the opposite effect. Or we all just being played?

Where ATC’s That Bloody Woman gave us a comforting rah-rah girl power message, Silo’s Boys will be Boys is the cynical market correction.

You could dismiss the whole enterprise as a dark fantasia, an extreme parody divorced from reality, except for the uneasy knowledge that Bubnic’s play is built from extensive interviews with those with first-hand experience of the world of currency trading.

Boys will be Boys has been programmed by director Sophie Roberts with some pretty spooky prescience. The mirror it holds up reflects back a whole lot of nasty images out there in society. Steve Tew could come make notes on team culture and collective responsibility. Someone should buy a ticket for Kevin Roberts.

Where ATC’s Kate Sheppard Musical That Bloody Woman gave us a comforting rah-rah girl power message, Silo’s Boys will be Boys is the cynical market correction. Its exposure of gender double-standards and a rape culture workplace is unflinching and uncompromising. It treats empowerment as an ultimately empty word. It’s unafraid to embrace bad feminism, to take a pessimistic, hopeless view of where the feminist waves have washed up today. It’s the most ballsy show you’re likely to see in a mainstream theatre all year.

But if you are looking for some reassurance, you need only look at who is behind the production itself: Sophie Roberts, her cast, and the mostly female production team. They’re doing it their way.

Boys Will Be Boys, until 24 September, Q Theatre, silotheatre.co.nz