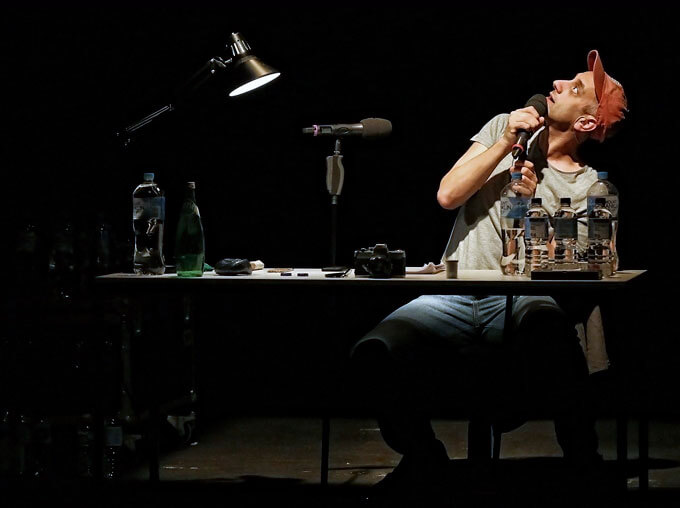 The Encounter is electrifying. Before you run off to buy tickets, please consider: have you ever actually been electrified? Other metaphors for the experience Simon McBurney puts you through in this astonishingly deft and busy two hour solo show would include standing naked in front of a man holding a fire hose, or watching a feature film shot largely under stadium-strength strobe lights.

Richard Katz, who performs the work, has a disarming stage presence, but McBurney, the director and the head of a large and expert crew of sound engineers, is an utterly uncompromising dramatic artist: and again, that is a more double-edged compliment than it may sound. The show starts — actually, before completing that sentence I should warn you that you’ll enjoy the evening more not knowing how the show starts. If you already plan to see it, then all you need from me is this verdict: it’s seriously flawed, but it’s also memorable, and for anyone prepared to do some hard work, it’s an experience worth having. Spoilers now follow.

The show starts with Katz wandering on stage and fiddling with the two large microphones set up next to the table which constitutes most of the set. There is another microphone on the stage, but it doesn’t look like a microphone. It looks like a human head impaled on a spike. Apart from these the stage is a wide open blank. Katz wanders off again and comes back a little later, to explain apologetically that they’re having some minor tech problems and the show will start very soon. Meanwhile, great to be here, isn’t New Zealand nice, let’s just take a picture of you all, so I can show my kids back home. They refuse to believe this is what I do for a living!

The show, as canny audience members will realise, is already well under way. Questions of belief, childhood and otherwise, and of how photographs freeze time, and of what time is, and ultimately of what reality is, are integral to it. So is cutting-edge sound design. Every audience member is given a set of headphones, and Katz demonstrates early on that with these, and his brace of microphones, he and the sound crew can create fully three dimensional sonic illusions. There are moments when his voice comes from behind you. From by your right shoulder. From inside your left ear. He adds recordings of himself speaking, and now he’s in two places. Three. Seven. Other voices phase in. You can’t catch everything they’re saying. You can’t catch everything Katz is saying. His accent is British, but he can switch it to Northwest American on the drop of a dime, and he does, and now there are two different versions of him speaking at once.

He tells you a story: he claims it’s a true one. In 1971 an American photojournalist named Loren McIntyre was sent by the National Geographic to find the headwaters of the Amazon. Alone in the rainforest, he encountered the Mayoruna, a long-lost tribe on the run from predatory resource extraction companies. McIntyre’s experiences with them form the meat of the performance, and they’re rendered as an overwhelming sensory barrage. The ideas behind the pelting sonic fragments are complex but also simplistic; McBurney uses the all-too-familar approach of making the presentation of his thinking so elaborate that you’re tempted to conclude you’re being told something profound. Actually you’re being told that our senses construct our reality and that we don’t really understand the nature of time, and also that forgotten Amazonian tribes are wise in ways callow westerners can’t fathom.

This is an exhausting show to experience: you will emerge wrung-out, simply from the effort of processing everything, or probably less than everything, that hits your ears. It’s also a less insightful show than it wants you to think. But it’s like nothing else I’ve met in theatre, and every aspect of the performance and design is top drawer.