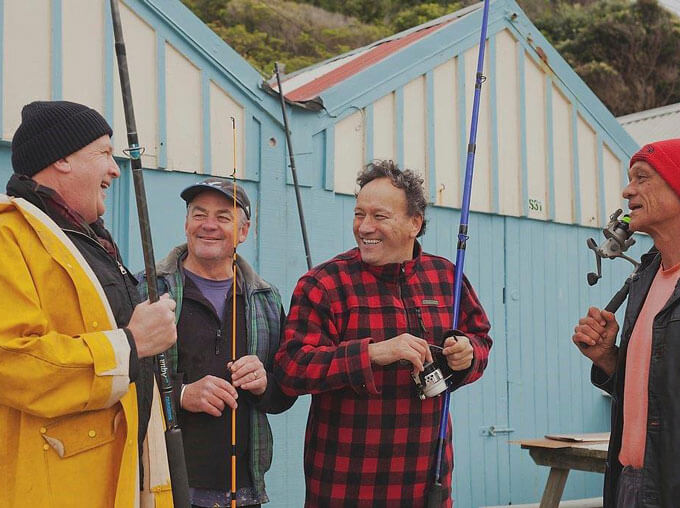 The liberal agenda hasn’t made it to the small-town NZ bar at the centre of The Biggest. The male old-timers meet up for a beer and exchange of un-PC abuse. “Bloody” peppers their sentences, and when their mate Stu joins them in a wheelchair, they ask him if his “diddle” still works. The friendship between Poppa (Jim Moriarty), Pat (Peter Hambleton), Mick (Apirana Taylor) and Stu (Tim Gordon) is built on masculine ribbing. The group also show a real-world biculturalism, Maori and Pakeha getting along and getting on with it, showing respect, if not full understanding.

Playwright and director Jamie McCaskill was inspired from his experiences observing mateship at the Thames local to celebrate “raw rural men” in this play, a section of New Zealand life that is rarely represented in New Zealand’s urban theatres. Last year McCaskill came to the Festival with Not in Our Neighbourhood, which confronted issues of domestic violence by taking us inside a women’s refuge. McCaskill says that The Biggest is “aimed at the mainstream”. It wants to sneak a Maori worldview into a populist comedy a la Roger Hall or Dave Armstrong.

It’s a blokey premise: the mates decide to enter the Hauraki fishing competition as an up yours to the reigning champ, upstart Jan Preston (Nick Dunbar), as well as the opportunity to win a boat for Stu, who had his boat written off in the road accident which also lost him his mobility. Yep, the set-up is about asserting masculinity, fishing prowess, and who has the biggest fish.

The forced comedy of the bar yarns and initial scenes are a little painful. We get the usual jokes at the expense of senior luddite confusion over “the google” and “the facebook”.

Slowly the play moves beyond the broad comedy and lays an anchor in the weightier themes that interest McCaskill. Poppa is ill and avoiding the doctor. Stu’s been emasculated by 40 years of factory work with nothing to show for himself. There’s regret from Mick about moving to Oz and cultural estrangement, and a late-life identity crisis about what makes a real Maori. It’s a pleasure to watch legends like Jim Moriarty and Apirana Taylor explore their characters.

Kali Kopae, who plays Poppa’s daughter, wonders if there’s much of a future for her in the town, but McCaskill’s play is hopeful about the resilience of these communities and ability to move forward together. There’s debate about the role of tikanga in fishing, whether the “god of the sea stuff” is relevant, and if they should give an offering to Tangaroa. It’s an argument for the importance of acknowledging Maori culture as part of the mainstream.

The Biggest is a very gentle nudge in the right direction. But it panders to the idea of “mainstream audiences” and needs to trust them more. The comedy is undersized, and McCaskill could still get deeper into the guts of the issues he raises. The Biggest is at its best when played for truths, not for laughs.

The Biggest, Q Rangatira, until March 19.