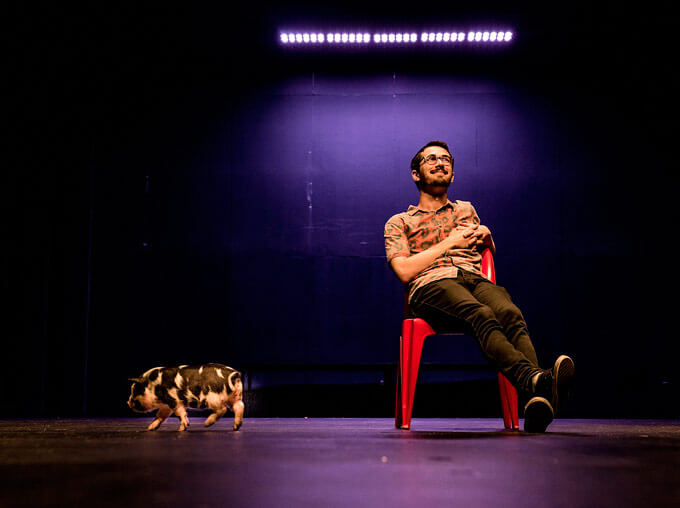 You could call Eli Kent the selfie-playwright. In previous works The Intricate Art of Actually Caring and All Your Wants and Needs Fulfilled Forever, Kent appears as a character. So when Auckland Theatre Company asked Kent to adapt Henrik Ibsen’s 1876 play, writing himself into the story was an entirely predictable strategy.

Ibsen is known as the father of realism, his plays exploring the psychological motivations of characters in a mode that has dominated our stages ever since. But before A Doll’s House came the expressionistic verse-play Peer Gynt, which grappled with the dramatic problem of how to portray the complex interior landscape of the mind on the stage. Ibsen was also obsessed with the self.

One of the famous scenes in Ibsen’s play is when the title character peels an onion to reveal that, just like himself, it has no core. Unfortunately, as Kent (played with winningly nerdy charm in this production by Jack Buchanan) explains, Shrek’s “Ogre’s are like onions” speech has entirely stolen its profundity.

But what Ibsen seemed to grasp, and how science would explain it now, is that we are a biochemical algorithm and there is no authentic and singular self. In one scene in Kent’s play Gynt goes on a yoga retreat in which Lisa Chappell’s cult-leader tells her followers that we must give up the lie of having a self.

Hello existential crisis. Not only does Buchanan’s Kent have an anxiety that in adapting Gynt he has nothing new to say, but also an anxiety that he himself is a nothing.

The contemporary Gynt is a playboy dancing through life, working his way through people (particularly women) and trolls (yes, trolls) without any care for consequences. In Ibsen an early episode involves Gynt abducting a bride; in Kent’s version he crashes Inka’s (Ella Gilbert) marriage to TV’s The Bachelor and roots her on the wedding cake table.

Furthering disrupting any sense of stable selfhood, the role of Gynt is played with braggadocious charm by Oscar Wilson, Jordan Mooney, and Adam Gardiner, until Buchanan’s Kent gives into narrative fate and also assumes the role of the title character. Through his fixation, Kent has become the play.

Kent wants to make us think he is more concerned with himself (or at least the fictional version of himself) than Ibsen’s text (which he says is super old, and super about Norway), but his updates of the text are a very clever literary response.

There’s so much here: a troll kink-dungeon, alt-right celebrity cameos, a riff on a Titanic meme, the NZ O.E. identity crisis, Kent’s mum. There are peaks and troughs, but overall, it’s an audacious, sprawling three and a half hour epic journey into the abyss of the self. Already ATC are realising the promise of their waterfront theatre: playwrights lifting their visions with ideas big enough to fill the space, enlarging the sense of what New Zealand theatre can be. Colin McColl’s direction is energised by being able to play on a such a huge textual canvas.

In the final analysis, this isn’t a play about Ibsen or Peer Gynt at all, not really. It’s fascinated by the big stuff. The slipperiness of meaning in the post-modern world, and that unanswerable question – who am I? Kent’s play becomes a manifesto for what theatre can do, and also a manifesto for life. You’ll be picking apart its layers for days.