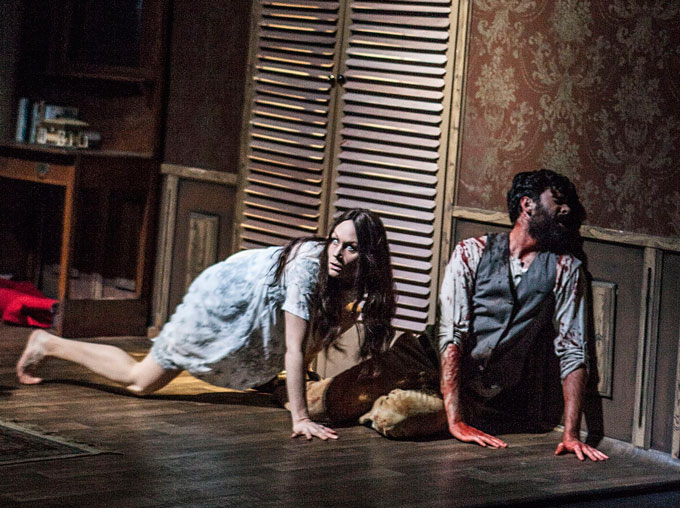 “We can, therefore we should”: if you want to know why technical virtuosity poses a major danger for creative artists of every stripe, look no further than Horror, one of the big flagship stage shows of this festival. Inspired by the horror movie classics of the 80s, the show ironically falls victim to the great sapping weakness of the more recent digital era, in which the ability to create endless spectacle has left so many films empty of anything but big budget wizardry.

Although, to give credit where credit is due, the wizardry on display here includes some dazzling bits of stage magic, and a set whose design is a lesson in both atmospherics and the elegant maximisation of space. The Amsterdam-based Jakop Ahlbom Company specialise in silent theatre spectaculars, combining mime, dance, music, and illusion. Each of their shows is a deep dive into a particular theme or genre. In Horror, we follow a young woman, her boyfriend, and a hapless friend (he practically comes labelled “Not Destined To Survive”) to an old house deep in the woods.

The show is almost entirely wordless, and it’s a credit to the actors that we quickly find our feet in the narrative: this house is where the woman grew up, with her older sister and their terrible parents. Something bad happened, bad enough that coming back here isn’t easy for her. Maybe it happened to her sister. Maybe that’s her sister over there in the corner, the one all in white with the silent screaming face: a sudden apparition in a flash of light, glimpsed and then gone. None of our possibly-doomed trio see her. That’s going to change.

Things get weird quickly, and by weird, I mean that the sister, who is either possessed or a vengeful ghost, comes creeping round a corner inverted-spider fashion and manages to infect the hapless friend with the desire to choke himself to death. The only way to stop him is to chop his hand off: cue arterial splatter. The hand starts walking round the stage wreaking disembodied mayhem: cue audience applause. These effects are some of the show’s best, and they come too early in its 90 minutes. The larger problem is that as more effects follow, it becomes increasingly obvious that the effects are what’s driving the story: the effects, and the desire to achieve visual quotes from films the audience may or may not be familiar with.

This show is all over the place. It’s baggy, it has too many characters, it front-loads its best moments, and it follows the logic of “anything can happen because it’s all supernatural”. By the massive fight sequence which draws things to an over-choreographed close, I was well past caring who lived and who died. The really disappointing thing is that there’s a fantastic show buried inside Horror somewhere; if someone had taken the knife that gets stuck in one character’s back and used it to hack 30 minutes off the running time, the lack of a coherent story would matter far less. And if someone had reshaped the story to focus more cleanly on the two tragic sisters, this could have been a show as good as its best effects.