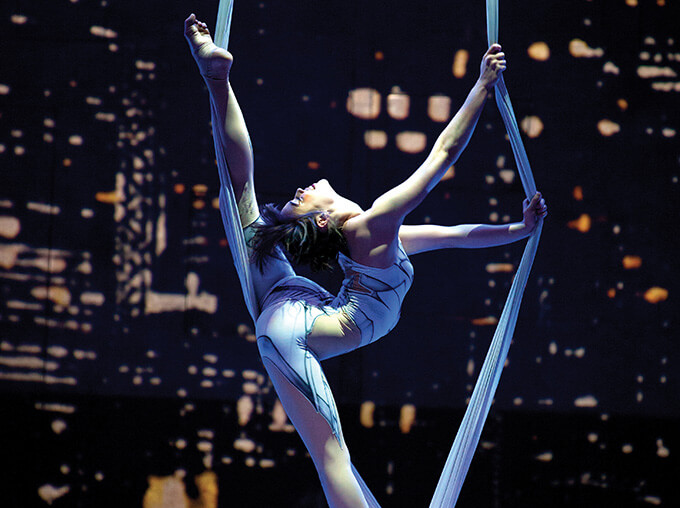 Starting off as a love story in the heart of a metropolis – with gangsters, breakdancers and cityscape projections – this show soon evolves into something of a nail-biting extravaganza. The fact the romantic plot seems to begin and end in the first 20 minutes of a two-hour production matters little, as Canadian circus troupe Cirque Eloize’s iD is so fast-paced and daring you’ll soon forget about director Jeannot Painchaud’s West Side Story-inspired attempt at storytelling.

The upbeat musical score has an undercurrent of a thumping heartbeat, making your own chest seem to reverberate with it. Breakdancing ties the show together, with each act – back-bending contortion, roller-blading, Chinese pole and aerial silks – linked to the next with a hip-hop performance from the entire cast. Aside from the cringe-worthy costuming (think 90s gangsters with blue bandanas, green camo jeans and unbuttoned shirts revealing bare chests), the fun dance routines work off the crowd’s enthusiasm, the performers psyching up the audience between backflips and bum jiggles.

One of the most thrilling spectacles is the Chinese pole. Olivier Poitras, clad in his “gangster” gear, climbs to the top of a 10-metre-high pole, then free-falls upside down, clutching it with just his feet and coming to a stop inches from a dancer who lies at the bottom. A collective audible intake of breath is followed by whooping and cheering. The crowd’s support continues as a man is picked from the audience and asked to lie down on stage. We wait, silently, then French trail biker Thibaut Philippe begins to jump over him, over and over again, his wheels stopping millimetres short of the poor man’s crotch. Our hearts go out to him. Eventually, the man stands up, a little red-faced but laughing nonetheless. We all laugh with him.

Nicole Winter’s contortion act is another highlight. She bends backwards until her head reaches between her feet, smiling at the crowd as if no effort is involved at all. Bending into frightening positions, her strength is equally impressive: at one point during an aerial silks set, she hangs upside-down and lifts a rollerblader into the air by holding just his head. We all feel a bit sick but relax a little once he’s safely back on two… wheels.

If it’s pure entertainment you’re after, then Cirque Eloize is a dizzying, upbeat display of it. You’ll leave with butterflies in your belly but with no weight on your shoulders. Just don’t take fashion inspiration from the b-boys.