Tom Scott's new album, Avantdale Bowling Club, is a celebration of a kind, an expansive paean to the place that raised him and where he belongs.

Tom Scott’s been through the ringer since the halcyon days of his Auckland-based hip-hop collective, Home Brew.

That group hit the top of the charts, but then Scott released a song with his next group, @Peace, that was timed for the 2014 election called “Kill the PM”. All hell broke loose. Apart from its threat on the life of then-Prime Minister John Key, Scott also boasted in its lyrics that he was going to have sex with the politician’s daughter. He was investigated by the police, and for a time became a media pariah.

But that was then. Now in his 30s, Scott ended up eking out an existence in Melbourne before fathering a child and returning to his ’hood, Avondale, the suburb he has so articulately described on his new album, Avantdale Bowling Club, which is a celebration of a kind, an expansive paean to the place that raised him and where he belongs.

But Avantdale Bowling Club is nothing like a conventional hip-hop record, if it can be described as such. There’s no boom-bap or Otara bass to be found here. Instead, Scott has hired the crème de la crème of local jazz players to create a smoky background to emote over.

Top performers include Julien Dyne (drums), Chip Matthews (bass), Jonathan Crayford (Rhodes piano), John Bell (vibraphone) and Isaac Aesili (horns), among many others, and while Scott’s patois remains steeped in American rap culture, the live (as opposed to sampled) jazz backing has clear associations. Jazz was the de facto music for the first generation of American beat poets, and it was also used by pre-rap African-American jive poet/hustlers like Iceberg Slim.

Perhaps the jazz is Scott’s tactic for negotiating his way out of a cultural ghetto or his attempt to escape the codified hip-hop behaviours, or maybe he’s just really into jazz. After all, @Peace, his previous group, was heavily influenced by this greatest of American art forms.

Scott’s Americanised enunciation is troubling (would we accept a New Zealand vocalist singing in a broad American dialect?) but is no deal-breaker, given the insight with which he describes his round-trip from Avondale to Melbourne and back home again to rediscover his roots. It’s refreshing to hear this modest Auckland suburb spoken of not as a dull tributary of Auckland’s suburban blight but as a hub of community, a place with soul that thrums with life.

And if there’s one thing in addition to Scott’s ability to write about a wide variety of topics and do so with such intricacy, it’s that he’s become a world-class rapper in the process, with a real flow but also a turn-on-a-pin rhythmic cadence, one that sees him able to move through the organic, mostly acoustic, modal jazz on the single “Years Gone By” with the poise of a dancer.

It’s not all happy families, and Scott’s as forthright as ever talking about the challenges of living and surviving in an Auckland stuffed with money but also troubled by homelessness and a housing crisis.

Accented with instrumental interludes that give the listener a breather from the torrent of verbiage, Avantdale Bowling Club is a brave, worthy and vital keyhole through which to view one man’s perceptive observations of life in our city. 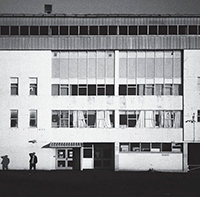