Sia: This Is Acting - review 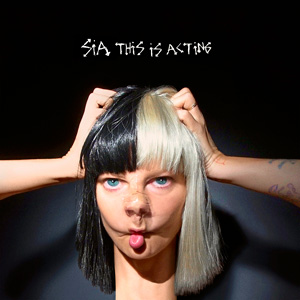 She’s written songs for the likes of Beyoncé, Rihanna and Christina Aguilera, and Australian singer-songwriter Sia Furler seems determined to out-garish all of them on her own latest candy-coated pop confection. Which is a pity, because if you listen to her contributions to the work of early 2000s downbeat group Zero 7, she can sing with remarkable subtlety and feeling.

There’s nothing quite as big, memorable or horrible as “Chandelier”, the hit from her last album, 1000 Forms of Fear, but the 40-year-old (whose shtick is never showing her own, unmodified face on artwork or videos) has once again squeezed out a 12-song monstrosity that tramples all over sophisticated notions of acceptable aesthetics in a headlong rush to encapsulate the most irritating mannerisms of modern pop: choruses so over-the-top that they soon become as tedious as the explosions in an action movie, lyric constructs that are as tired as Rip Van Winkle (“I’m a house on fire/I wanna get burning”, anyone?)

The tragedy of this is that if you take away the histrionics, her over-emphasised tendency to enunciate like she’s got a mouth jammed full of bubblegum, and songs that are clearly designed to order, there’s actually talent here. The hip-hop hybrid “Sweet Design” hints that this could have been a very different album, and it’s obvious she can out-sing and out-write many of her more glittering contemporaries. But you know, it’s only acting.

If this album has you bellowing along on its power choruses, you could try Rihanna’s Anti.