The net effect of Princess Chelsea’s intimate, naive presentation should be as cloying as the cute pop pastiche of the group that built her record label into a thing, The Brunettes. But somehow, she manages to sidestep that irritant factor.

In ways reminiscent of David Lynch’s original Twin Peaks song-bird Julee Cruise, Princess Chelsea — every bit as much a character creation — conveys a similar sense of tarnished innocence, but without the doomed gravitas of Cruise. Instead, hers is a sugar sweetness with a lacing of strychnine.

Chelsea Nikkel’s fourth album, The Loneliest Girl, shares the slightly sly, knowing aesthetic of label-mate Jonathan Bree, whose excellent recent album, Sleepwalking, also displays an impulse to understand and address grown-up realities. Nikkel’s is a record about the loneliness of relationships, coming to terms with infidelity, carnal imperatives versus love loyalty, the scariness of ageing (or, at least, being a little less young and perfect), and it’s full of simple but well-articulated observations and rationalisations.

On previous albums Princess Chelsea was living the dream, or dreaming her reality, but here it feels as if real life has pricked her bubble. A song like “Good Enough” plays out like a jaundiced musical fairy tale with a sting in its tail, as it describes a “funny girl who stayed inside all day and night” and finally met her match in a “funny boy” who liked the same things as her, but how eventually, “she knew he would break her heart”.

On the best song, “The Pretty Ones”, her baby-girl voice takes on the sound of real spite as she describes infidelity and seemingly unstoppable carnal lust as “an age-old situation… in pursuit of the perfect gene… this is how the world spins around”, and it feels like the real Chelsea Nikkel is peeking through the curtains of her own creation. Then, on “I Love My Boyfriend”, she’s dealing with her own sexual impulses towards a friend: “Every time he looks at me I get electric shocks in my brain and heart, but he is not the one I love… I know that it is only chemistry.”

Throughout The Loneliest Girl, Princess Chelsea transforms what might have been mere pastiche into an art-pop confection that dares to talk about what it’s like to be a young woman negotiating the fraught transition from carefree dreamer to responsible adult. These songs seem light and sometimes slight, but that’s actually their strength. Nikkel reduces words and music to a winning simplicity, but whether she’s dishing out clouds of spectral synth, writing chord changes out of John Barry’s 007 book or getting a robotic Giorgio Moroder groove on, it’s a complete package and it works.

Princess Chelsea performs at the Hollywood, Avondale, on October 26, as part of her nationwide The Loneliest Girl tour. 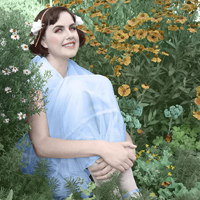