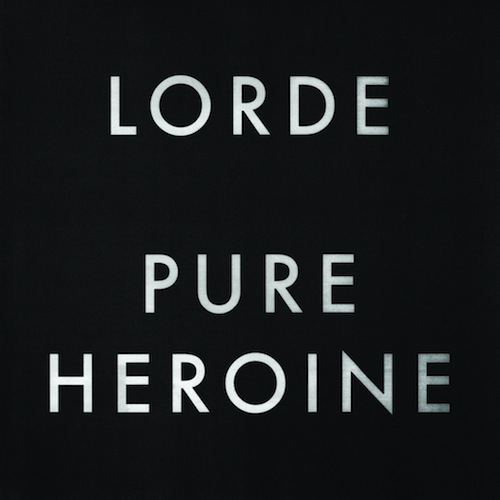 Let’s pretend for as long as it takes to read this review that we know nothing of Lorde, or the 16-year-old behind the name, Ella Yelich-O’Connor, or the way ‘Royals’ instantly and ironically claimed her stake as a member of New Zealand’s rock royalty with its stellar international success.

After all, you can read Duncan Greive’s excellent, epic, fly-on-the-wall account in the October Metro for that, and all the information you could want about the young prodigy and her family background, and the machinations of her management and record company, and how she’s dealing with all the attention.

Doubtless, reviews of Pure Heroine will gorge on the phenomenon of Lorde, so let’s do something just a bit radical. Let’s talk about the music.

Had this reviewer come across Pure Heroine in a pile of new releases, with no biographical information supplied, and no prior knowledge of the artist, he would have been overwhelmed with curiosity, taken by the precocious talent, charmed by the lure of her seemingly effortless vocal prowess (both emotionally and musically), and slayed by her wilful determination to kick against the pricks; to state her authentication, while moving in an arena swimming in artifice.

Make no mistake: this is pop, but it’s a version of pop that reveals emergent forms and a new attitude only possible from someone who has grown up in the digital era. While Gen X and Y musicians are chasing their tails and churning out a cumbersome, tired broadband pastiche of artificially rendered eras, Lorde seems almost supernaturally focused on her own thing. I wouldn’t be surprised to find that she had megalomaniac tendencies, given the clarity with which her three-minute gems are crafted into precision musical emoticons.

Lorde is clearly well-read, and probably knows the meaning of the word ‘existentialism’, because there’s a deep, almost Goth-like world-weariness embedded in her bright pop pastels, but she’s clever enough to know her medium, so the wordplay is smart but never overreaching, and more importantly, she’s clearly in command of her musical language. Throughout Pure Heroine, her sonic template sounds alluringly simple, but there’s complexity within the clarity.

The backing is exclusively electronic, with an emphasis on crisp, snapping beats, and ominous, growling and gurgling synthesisers. Had the treatment of Lorde’s vocals been anything other than astonishing, that backing may have produced a sameness that killed the album stone dead. But instead, the airless backing is just spare enough to allow her vocals to really take flight. Examine these songs forensically, and the extraordinary way her vocals are layered (and occasionally pitch-bent) becomes apparent, and that’s part of what makes them. ‘Royals’ is as good a template to work with as any, and a good indication of her style: a kind of call-and-answer technique that starts with a nonchalant verse, answered by an almost Kate Bush-like choral effect, but also incorporating a kind of sing-speak from hip-hop. And then there’s the obvious influence – intentional or otherwise – of Broadway song in its infatuation with Negro spirituals and even a touch of Harry Belafonte’s island jauntiness.

While the same essential technique is used repeatedly throughout Pure Heroine, it’s never simply a template, and each of the songs inhabits its own micro-universe.

But is it all good? Well, at a mere 10 songs and 37:14 minutes, with average track length a little over three minutes, Pure Heroine is over in a flash, and there’s little to carp about.

‘Ribs’ is interesting. On the one hand, it’s a euphoric pop song with a throbbing, house music surge at its centre and synapse-snapping drums, but with almost Enya clouds of overdubbed vocals and a lyric about fear of aging. Fear of aging! ‘Buzzcut Season’, on the other hand, has a backing that’s all hazy melancholy shoegazing, while her singing on this is a lesson in versatility.

Intentional or not, the Lana Del Ray similarity to her lower vocal tones is inescapable on ‘Tennis Court’ and ‘Buzzcut Season’, but that’s no hindrance. Neither is the fact that her most ecstatic pop climaxes catch a little of The Naked And Famous singer Alisa Xayalith’s lemony ache.

The lyrics? Well, Lorde is so determinedly sarcastic and hung up on the ‘whatever’ principle, that terminally bored attitude only teens can generate, that her youth is inevitably etched into these songs. ‘White Teeth Teens’ sounds like a cheap shot, but if you ignore the lyrics, it works. On ‘400 Lux’, she is just killing time, so she’s suggesting that she kills time with someone else. Better to have a companion to be bored with, I guess.

Aloneness crops up repeatedly, and is raised to the main theme of the grand finale, the unusually downbeat ‘A World Alone’, which seems to be making the rather clichéd point that despite the incessant chatter of the modern world, “We’re dancing in the world alone… alone.”

While the obsessions may be more or less translatable to any era, in both presentation and content, Lorde is very much of the present era, a truly trans-genre artist whose time is now.

Her debut is hardly perfect, but its constituent parts are strong enough to suggest greatness, and her innate ability to reconcile the strands of commercial pop with her more artful instincts with any conscious will to fuse the two make it a bright and refreshing thing to behold. And to experience.