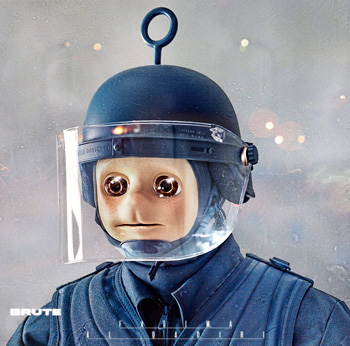 Fatima Al Qadiri is a Senegal-born, Kuwait-raised artist whose music has been feted by all the right people, and who, as part of the GCC collective, has exhibited at the likes of MoMA and the Whitney Museum of American Art.

Brute, her second album for Hyperdub — a label associated with the furthest reaches of the dubstep genre — “sees her explore themes such as Occupy Wall St, totalitarian regimes and the affectivity of sound design and sampling in consumable music”. Or so says the press release.

Given that, apart from dialogue stolen from news broadcasts, Brute is entirely instrumental, it’s hard to make a case for the album being about anything in particular. More conceptual than actual, it’s occasionally scary in a film soundtrack sense with its hi-tech electronic sound, desiccated rhythms and nasty-sounding synthesiser chords.

Ultimately however, if its purpose is to scare people into action, it has failed. It’s limited palette of pre-sets prevents real engagement or emotional involvement, and the whole thing is very nearly derailed by ornate fripperies that sound like some new-age guru from the 1980s pushing the “celestial twinkle” button on a polyphonic synthesiser.

If overt electronics are your bag, you might be better served by the hi-tech shenanigans of Monolake or the post-dubstep of Shackleton.