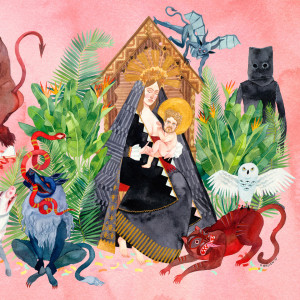 Having gone viral with his David Letterman performance of “Bored In The USA”, the second Father John Misty album – with its ornate pop up cover and fold out poster – will doubtless get the big push.

Like that song, I Love You, Honeybear is practically dripping with hipster sarcasm, but Father John Misty (who is really just a bloke called Josh Tillman) has also tapped into another trend by decorating his singer-songwriter tropes with ornate, semi-orchestral arrangements.

Tillman acknowledges his debt to songwriters like Harry Nilsson and Randy Newman, whose stock in trade was smart (and often smart-ass) story-songs with almost filmic musical iconography. The differences are stark, however. While Nilsson’s life was packed with drugs, alcohol and misadventure, the music merely suggested as such; Tillman’s semi-conceptual song cycle tacitly acknowledges the fact with a post-hip hop line to the explicit, in which getting wasted and getting it on with twisted chicks is just a précis to an examination of self and psyche.

It’s novel, but Tillman’s songs, while not without merit, barely warrant the lavish and often too-busy arrangements.