A university-trained jazz pianist who can play pop, indie, folk and learn a choreographed dance routine without blinking, CRYSTAL CHOI is preparing her first record as a singer-songwriter with her dream pop band Phoebe Rings.

There is something a little dreamy about jazz-trained pianist-turned-singer-songwriter Crystal Choi, whose new project, Phoebe Rings, is firmly in the tradition of dream pop. Choi has a blue-black bob and speaks with floating but focused sincerity about music and life. “The dreaminess part of it is very, very — it’s always been a thing for me, since childhood,” Choi says, of Phoebe Rings’ immersive sound. “Music taking me to different places, out of the world… I’ve always liked that.”

Phoebe Rings, with Choi on synths, keyboards and vocals, Simeon Kavanagh-Vincent on guitar and synths, Benjamin Locke on bass and Alex Freer on drums, came together in 2019 and played their first gig “just before we entered lockdown”, recalls Choi. So far, they have released one single, a light, shimmering track called “Cheshire”. Choi is facing a busy next few months: Phoebe Rings is planning a second single for release in June, a New Zealand tour with the band Lips for July, and the EP for August.

Musicians who have seen or played with Choi rave about her skill. Hollie Fullbrook, the singer-songwriter behind the acclaimed ensemble Tiny Ruins, for which Freer also plays drums, first saw Choi playing at a gig for A.C. Freazy, Freer’s solo project. “I was struck by how fluid she was with these very fast, eclectic keyboard and synth parts,” Fullbrook recalls. “Then I saw her singing as part of another project, Skilaa, and was blown away by her voice and how she’d learnt these mad intricate vocal parts, harmonising with lead singer Chelsea Prastiti.”

Singer-songwriter Chelsea Jade — whom Choi has accompanied on piano many times, including for a few performances on her recent New Zealand tour — first saw Choi when she was playing jazz one night at the Wine Cellar. Jade says Choi is “one of the best piano players I’ve ever seen”, and loves performing with her. “She didn’t blink at learning a fully choreographed dance-based show. She’s always quietly game. It’s rare to find such a formidable lack of ego in someone so deeply adept at their craft.”

Choi was born in Seoul and moved to Auckland with her parents and older brother in 2000, when she was seven. She grew up in a Korean-speaking home, and the family moved several times, with Choi changing schools each time, before settling in the North Shore suburb of Castor Bay. Her father owns a convenience store, and her mother is currently studying English; her brother returned to Korea as an adult and has settled there. Choi remembers the adjustment to living in New Zealand as “peaceful”.

Part of the reason her parents emigrated was so that their children wouldn’t be exposed to the pressure of Korea’s education system, so they never pushed Crystal or her brother to cram for school or piled on demanding extracurriculars. In fact, Choi started learning piano almost by accident; her parents were working long hours on a new business, they needed childcare, and the after-school programme they found happened to be a music school. She gravitated to the keyboards.

“Because my parents didn’t push me, I found it a little bit more relaxing, and I could get more fun out of it,” says Choi. More than anything, she loved the transportation that music provided, how a song could take you to another place or another world. Choi was always drawn to the contemporary pop she heard on the radio, but she listened to everything from the music in her brother’s Japanese RPG video games, to old K-pop, and the 70s and 80s hits that her father, who had once been a singer in a pop duo back in Korea, played. In high school, she loved Stereolab, Broadcast and Maurice Ravel. “I was always interested in finding a good sound,” she says. “My brother and I would try and figure out how a song went, and then play it on piano.”

Growing up in a family that has roots in another culture often means your identity becomes layered. That necessarily affects your way of seeing the place where you live, and yourself. You inherit, through your parents, access to another perspective, history and language, and the children of immigrant families, capable of operating on both sides of the culture, often take on roles as family translators and explainers. Having a perspective that is different from everyone else’s is never a bad thing for a budding artist, but third-culture children like Choi cannot reach adulthood without deeply questioning their relationship to home — something that is even more true for someone who is both a daughter of immigrants, and a visible minority. “When I go to Korea, I feel like a foreigner, but when I’m here, I’m also a foreigner,” Choi says. “Like you’re a jigsaw piece that kinda fits, but not perfectly.” 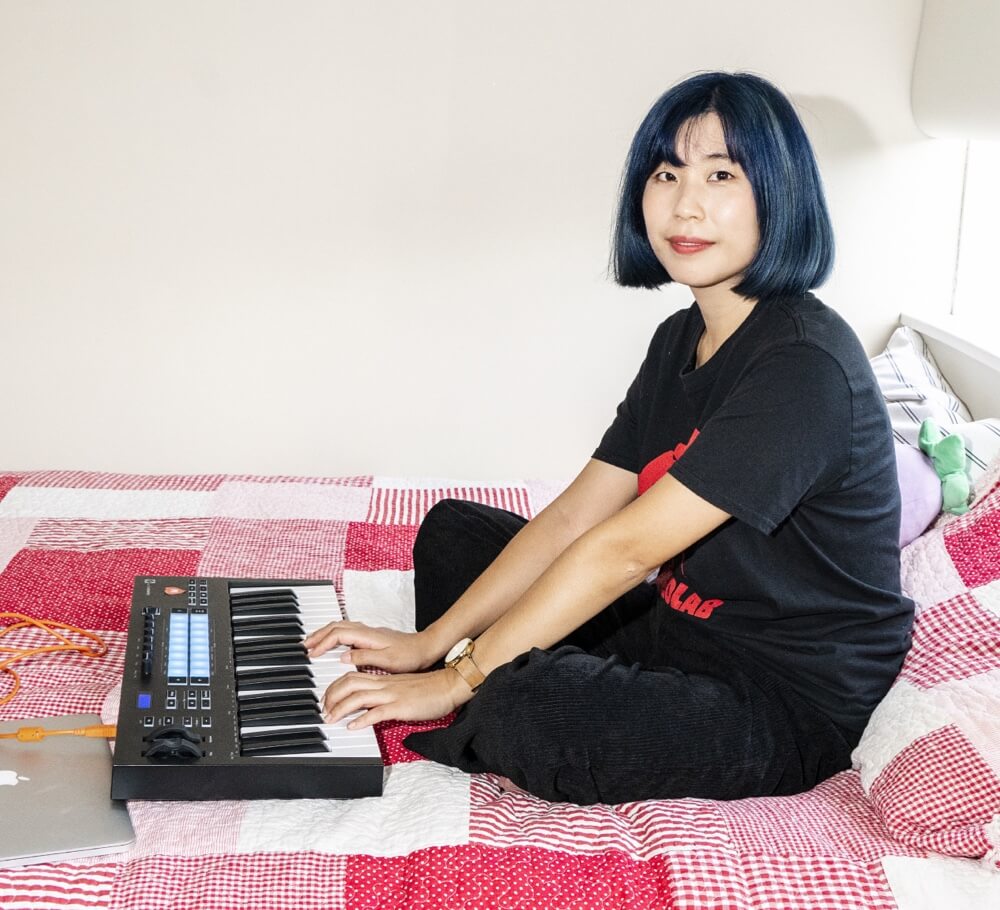 “I connect with a lot of Korean New Zealanders who have lived approximately the same amount of time as me, ’cause they’ve got very similar experiences to me,” Choi goes on. “And when we speak we’ll be mixing Korean and English, without even realising it. Well, it’s all me. It’s all us.”

Classical piano studies in high school led Choi to jazz at university. Choi has plenty of good things to say about the course and the professors, but she recalls it as a difficult time. “I didn’t know until I graduated, going through my notes and diaries, that I was very stressed out,” she says. “Learning music at an institution, and being graded on it, made me so stressed about my marks, and I was always comparing myself to others. I felt like my self-esteem just went down so much. It made me realise that validating myself through how good I am at music wasn’t the healthiest.” She finished university unsure of what she wanted to do next, musically, but knowing she didn’t want to be a full-time jazz pianist.

Choi played jazz gigs — for a while, she even led a 10-piece chamber jazz group, until scheduling with nine other busy musicians got to be too much — and embarked on a long period when she mostly lent her talents to other peoples’ projects. She did a European tour in 2018 with Princess Chelsea and Jonathan Bree. All the while, Choi was figuring out her own sound.

“Finally seeing Phoebe Rings emerge as a formidable live band and listening to their recordings, it’s a humbling experience to witness the full blossoming of Crystal’s art,” says Fullbrook. All told, Phoebe Rings is the result of years of steady exploration by Choi to find her own voice and all the layers of her musical identity. “It took a long time,” she says with pride and only a trace of nervousness. “It’s really exciting.”