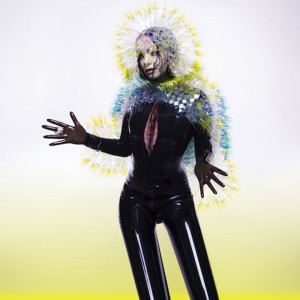 Bjork set the scene for the new generation of self-determined female artists when she debuted with the album, uh… Debut back in 1993. Today’s free ranging pop art scene is unimaginable without her, but over 20 years later, is there anything new to be gleaned by Bjork?

Well, anyone who felt that she was too overtly grandstanding or self-consciously art-oriented might learn something from the second track, “Lionsong”, an entrancing ballad that goes straight to the heart with its magic melodies and sweetened harmonies and a grainy catgut Baroque touch to the orchestral arrangement. But of course, nothing is quite that simple with Bjork, and an extra dimension is given the song by the depth-charge electronic drums and bass that somehow manage to shadow rather than dominate.

It’s clearly taken a very personal event to propel Bjork towards Vulnicura, but it’s no ordinary breaking up and moving on album, more of a deep and passionate exploration of loss and healing that gets right to the universal core of relationship disintegration, and personal rebuilding; one that is time-lined chronologically by the songs.

I suppose it makes sense that someone whose sensuality and physicality is so central to her creativity would know what to do with something as seemingly mundane as breaking up. “Every single fuck we had together is in a wondrous time-lapse with us here at this moment”, she sings in “History Of Touches”, and you know that she’s caressing the memories, not just descending into darkness – although necessarily, there are harrowing moments. Even those moments however (like when she examines the impact of the loss on family) avoid cliché.

This time Bjork has restricted her collaborations to just Venezuelan producer Arca (the knob twiddler behind last year’s extraordinary FKA Twigs album), and a musician who goes by the name The Haxan Cloak. This economy flight is no less rewarding however, than her more lavish outings. If anything, it disciplines the artist to conjure key elements of the singing voice that may have been unnecessary previously, producing an economy of emotive power with mostly just voice, strings and a few well-placed electronic triggers. And for those who define Bjork by her voice (which is the thing blokes do with female artists, right?) it’s her overall musical arrangements here that are set to “stun” mode.

While some haters will still blanche at the mere sound of Bjork’s voice, Vulnicura is, if not a complete rewrite of her persona, at least an intense focusing on those parts of who she is that really matter.

Economy, precision and heart. Oh, and the answer to the question back there at the beginning? Definitely, resoundingly in the affirmative.