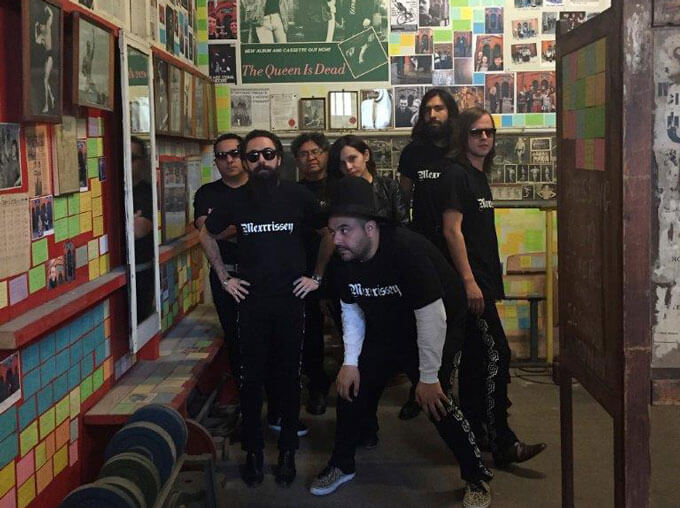 Mexrrissey shouldn’t work. I don’t understand how it even exists. How is it possible to simultaneously be rabid Morrissey fans and think it’s a good idea to form a Morrissey tribute band which completely undoes every last thing about Morrissey’s music?

This in itself is ridiculous enough, but here is the crazy bit: Mexrrissey, the Mexican Mariarchi-Morrissey fusion group, do not just take indie rock’s glummest, too-cool-to-care music and add happy poppy ebullience, wild trumpet solos, and seriously cool not-quite-sombrero hats. Any group of sufficiently lunatic enthusiasts could do that. What Mexrrissey do is demonstrate that turning this music’s emotional default settings upside down is in fact a stroke of genius. I haven’t had so much fun dancing to “Hang the DJ” since — well, ever, actually. In its natural form it’s music to slouch to.

At this point I should admit the obvious: I can take Morrissey or leave him, by which I mean I generally choose to leave him. I went to this gig because it sounded absurd, and long festival experience has taught me that the absurd things are where you find a lot of the best surprises. For me, that’s exactly what this turned out to be. But for a serious Morrissey fan?

Three relevant facts. I emailed a Youtube clip of the band to the only such fan I know, and he responded, “Wow. That looks awesome. Sounds good too.”

Also, there were a lot of people in the audience wearing all black and the signature heavy-frame Morrissey glasses, and they were up on their feet dancing with the rest of us.

And also — the band are not kidding about being serious Morrissey fans themselves. They love this music. It shows.

The show runs a succinct 75 minutes, and it feels much shorter. Clearly aware that they don’t have the whole night to get the audience warmed up, the band insist right from the start that people clap the beat, stand up, start dancing. “Crazy things happen at our shows”, said the band member with the best English. (He claimed not to speak the language well; the evidence was against him). “People give birth. People faint. People get naked. We expect you to get naked”.

No one got naked. (Reader, I looked.) But in the face of serious initial resistance, the band persisted in urging us onto our feet, where the bouncing rhythms and tongue-rolling mariachi cries and the sheer sense of energy quickly did the rest. The evening turned into a dance party. My sense was that the people who knew the music the best were actually having the best time — which I wouldn’t have predicted, in the same way that I wouldn’t necessarily expect a Shakespeare expert to welcome a rap version of the plays — but I don’t think anyone there was failing to have fun.

There’s only one more night of this show. You know what, you’d be crazy to miss it.