Rooted in New Zealand: An interview with Sam Neill

We’re voiceless without the arts, warns our first real movie star and co-lead of Hunt for the Wilderpeople.

This article is published in the April 2016 issue of Metro, on sale now.

Sam Neill doesn’t need to talk to me. He might be obliged to, contractually, but when we first meet, in the executive suite of a nondescript Auckland hotel, he speaks with the assurance of someone who has little to gain and nothing to lose. Which is not to say he isn’t affable and generous, but that he seems much happier just talking than talking up the film he’s here to promote.

Before I can ask him about said film — Hunt for the Wilderpeople, Taika Waititi’s adaptation of Wild Pork and Watercress, Barry Crump’s novel about an odd couple (young/old, Maori/Pakeha, urban/rural) who go bush to evade the law — Neill starts vetting me. He wants to know what he’s in for.

He asks my age. (34. “Fuck’s sake. That’s pretty young.”) And my assignment. (Metro. “I was probably in Metro magazine when you were about two. Good it’s still going, isn’t it? Not many things are. God forbid it should go online. Who wants to read anything online?” I tell him this will end up online. He smiles.)

Neither of us has seen the film, so we’re both flying a little blind, though I more than he, obviously. “Yeah, I was there,” he says. “Live and in person.”

His character, Uncle Hec — a stoic and self-sufficient alcoholic ex-con, who we come to learn is softer and more golden-hearted than expected — is the kind of mythological New Zealand Man you don’t see much of any more. The Southern Man, the Speights Man, the Man Alone.

“There are things about this film that are the ‘New Zealand Archetype’. Consciously so,” he says slowly and patiently, never rushing a thought or word choice. “It’s not necessarily accurate and one should never generalise about anyone, probably least of all the New Zealand male, but hopefully, I’ve never played to cliché and I think he’s a lot more complex than the archetype suggests.

“But I did grow up with New Zealand blokes. I think we all did. I did my time in a freezing works, I did my time doing agricultural work. I worked on the trucks for three summers, going from farm to farm. And there were Hec types here and there. But there’s no one Hec.” 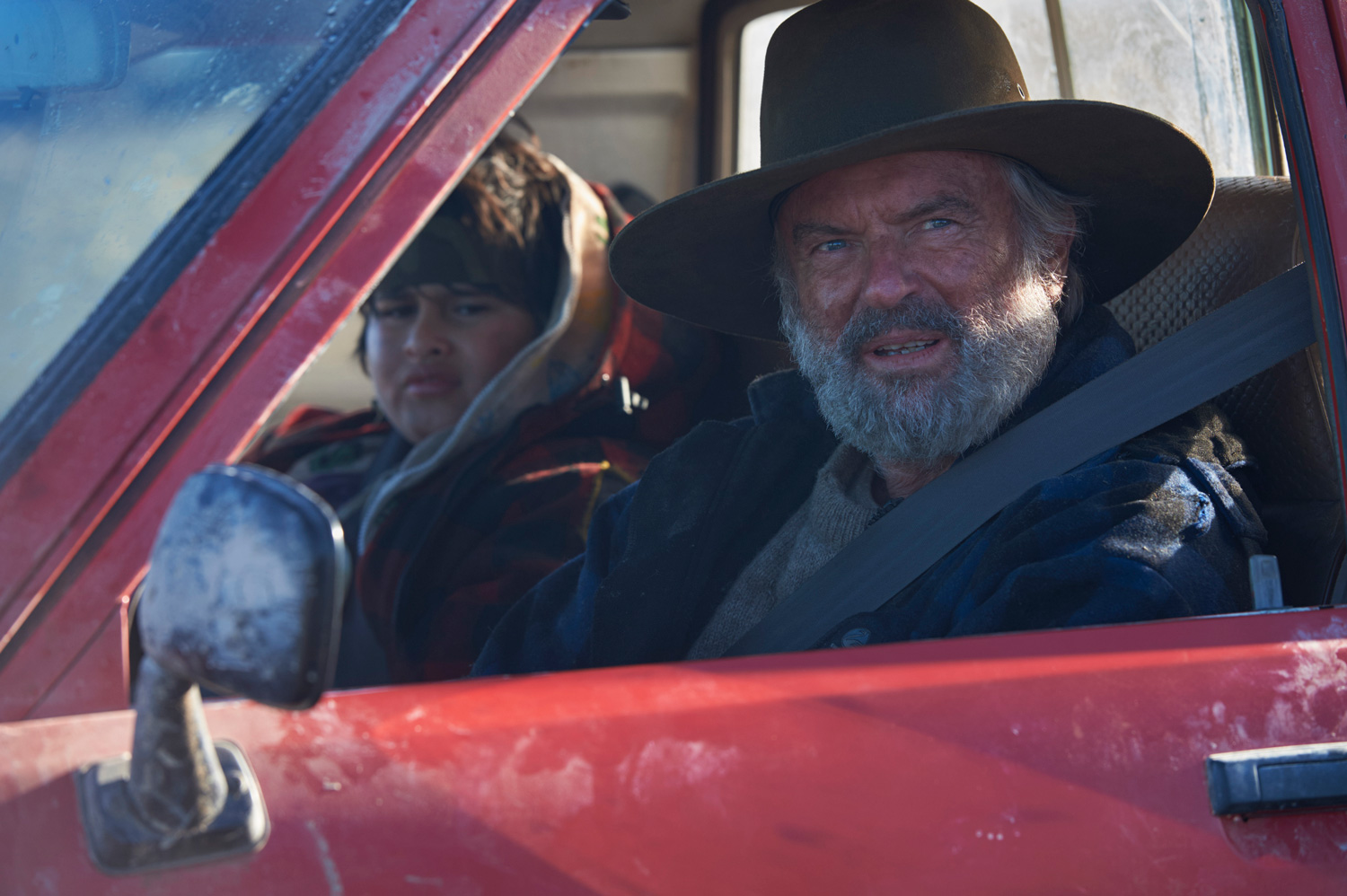 Julian Dennison (Ricky) and Sam Neill (Hec) in Hunt for the Wilderpeople.

Neill loved working with Waititi, whom he describes as an “artist”. “On a good day, and he has many good days, there’s no one more inventive or more fun to be with,” he says. “And it’s my earnest hope that we don’t lose him for good. Because he’s a unique voice in New Zealand. He has lots to say. He has a way of looking at things. And that’s what great artists do. They help you see things. Help you see where you are in a totally different way.”

He tells me about seeing the Okareka Dance Company’s K’ Rd Strip at the Edinburgh Festival last year — how it brought him to tears, how it showed him how our country is changing.

Neill happily drifts from topic to topic, interpreting my questions in a way that allows him to take the conversation wherever he likes. But he’s not taking the piss. He’s an earnest and serious man, and having seen him play so many earnest and serious men, you feel like you know him immediately.

I ask him what, if anything, the film has to say about contemporary New Zealand society and whether he feels part of the cultural divide that anchors the film. He tells me about seeing the Okareka Dance Company’s K’ Rd Strip at the Edinburgh Festival last year — how it brought him to tears, how it showed him how our country is changing, how it filled him with both fear and hope for our future.

“We’re so full of potential, but we lack leadership,” he says. “There’s ‘okay jokers’ running things. But have a look at the New Year Honours List and see where the priorities lie in this country at the moment. Have a look at the last one. Jane Campion gets knighted. Apart from that, the arts are almost entirely ignored. And without the arts, we’re rooted. We’re rooted.

Neill became New Zealand’s most internationally successful actor almost by accident. A jack-of-all-trades for the New Zealand Film Unit, he got his first lead role in Roger Donaldson’s Sleeping Dogs (which some consider the birth of the modern New Zealand film industry). Sleeping Dogs led to roles in Australia, then the UK, and then Los Angeles, playing the straight man in horrors and thrillers, slowly ascending the Hollywood career ladder.

“No one from New Zealand had had a screen career before me. When I left, I was like a message in a bottle. I threw myself off the cliff and who knew where I’d end up.” 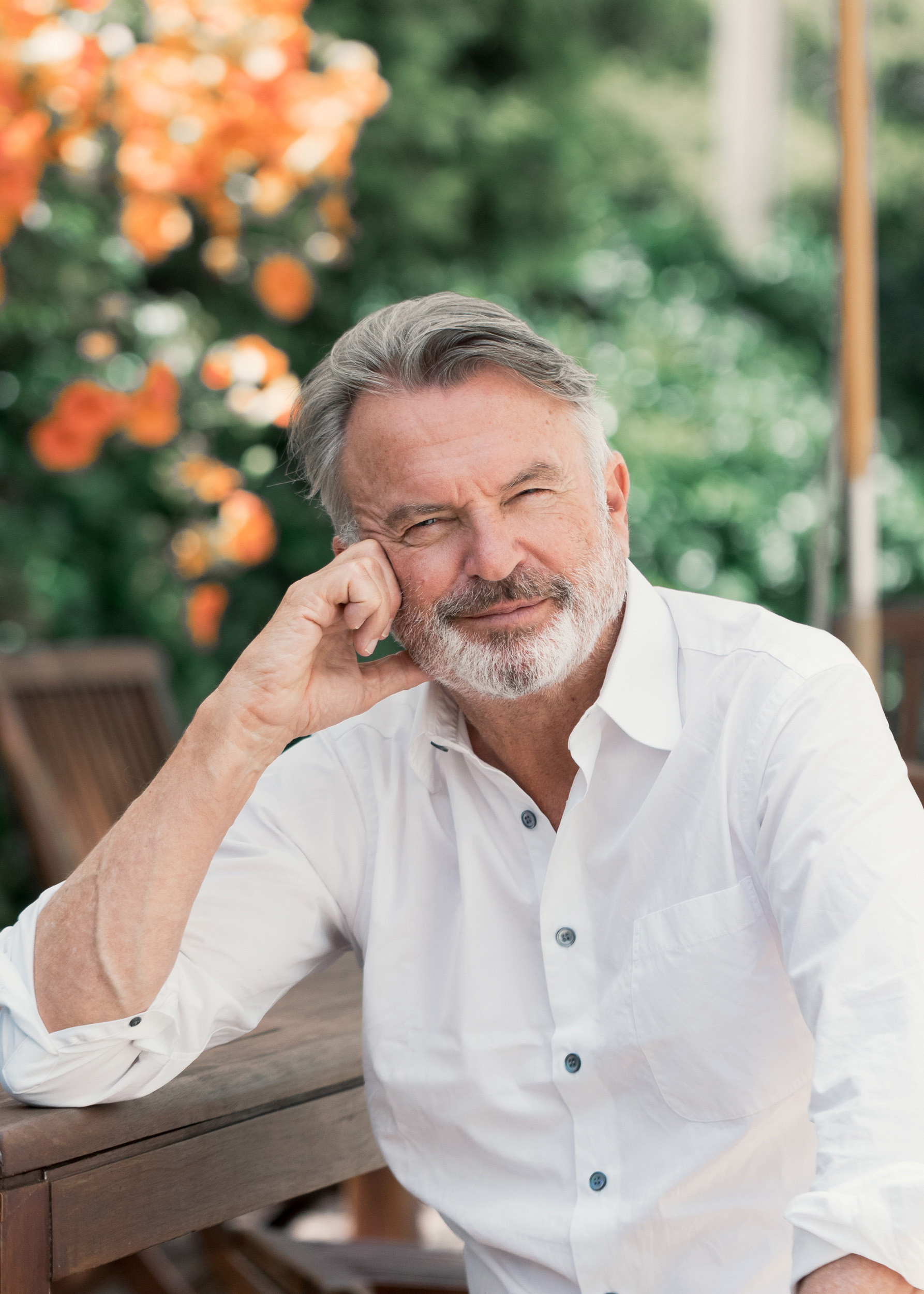 Although he once enjoyed the rare accolade of being the lead actor in the highest grossing film of all time (Jurassic Park, which held the honour from 1993 until Titanic sank it in 1997), he says he’s never really been ambitious. “There have been people that have been ambitious for me,” he says. “But they leave me in a state of bafflement. I had an agent once who pushed me towards being Bond and I kept saying, ‘I don’t want to be Bond’, and he said, ‘No, no, darling, off you go.’ So it was no surprise, and somewhat a relief, when it went somewhere else. And thank God for that. It would have been a curse for me.”

Weeks later, we talk again, both now having seen the film — I at a media screening in Newmarket, he at two sold-out screenings at the Sundance Film Festival. “I was very pleased to be in a big audience with people enjoying it so much,” he says. “And the enjoyment was evident because people were laughing so much. It’s not often that I’m in films that make people laugh so much.”

We talked about the documentary he’d made in 1995, Cinema of Unease, about the darkness of New Zealand films, and how much things have changed since then — in particular, the emergence of a fresh New Zealand comic sensibility: Flight of the Conchords, Rhys Darby, Taika Waititi.

He accepts that Cinema of Unease quickly became out of date as New Zealand shifted towards comedy (and Australia, conversely, towards dark drama), but denies that filmmakers like Waititi are necessarily disproving his thesis. Hunt for the Wilderpeople is “not just comedy”, he says. “There’s quite a lot of sadness in it as well. But it’s a very affectionate film about where it’s from.

“I think New Zealanders will take it to heart. Because it’s about us.”